Investing can test your patience. Sometimes a flashy stock comes on the market, and you're left resisting the fear of missing out (FOMO) as it spends months trading at a sky-high price. Investors might've felt FOMO since cybersecurity stock SentinelOne (NYSE: S) went public in June 2021.

The marketwide sell-off has steadily pushed shares lower, down 17% since the beginning of January. While the stock's valuation is still far from a bargain, there are three reasons why I'll be looking to buy this stock if it keeps dropping.

1. Cybersecurity is a hot market

It's become common for a company to make the news because it was hacked, with consumer data being corrupted, stolen, or exposed. According to research by International Business Machines , a data breach can have enormous financial consequences, costing an average of $3.86 million per occurrence. 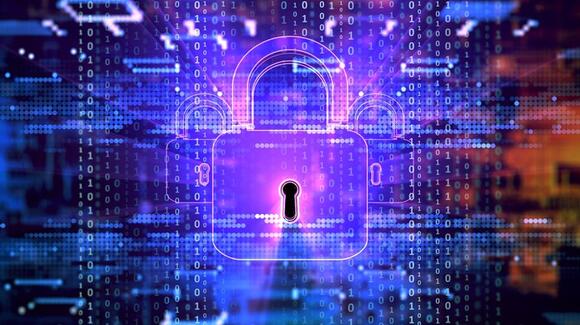 These high stakes could push businesses to spend more money protecting themselves in the years ahead. As of 2020, the global cybersecurity market's valued at $167 billion, according to Grand View Research, and projected to grow an average of 10.9% annually through 2028.

SentinelOne provides a sophisticated product that includes endpoint security, protecting end-user devices like PCs, laptops, and mobile devices from malicious threats. The company's Singularity XDR platform uses artificial intelligence to organize, map, and monitor everything a device does; it calls these "events," creates "storylines" from them, then looks for suspicious items that don't belong. Research firm Gartner has named SentinelOne a "leader" in endpoint protection along with competitor CrowdStrike Holdings .

SentinelOne uses a software-as-a-service business model , so looking at the company's annual recurring revenue (ARR) is an excellent way to gauge how the business is performing. Its ARR grew 131% year over year to $237 million in the third quarter of fiscal 2022 (the calendar 2021 year).

The company's revenue growth is coming from multiple directions; it's gaining new customers, picking up 600 new accounts in Q3 from its previous quarter, and growing total customers 75% year over year to more than 6,000.

Additionally, customers are spending more money once they come on board. The company's net revenue retention rate was 130% in Q3, indicating that customers are dramatically increasing their spending, a sign that the product is robust. The key for investors is that growth continues in future quarters in a competitive environment that pits the company against CrowdStrike.

One of the unique aspects of SentinelOne's platform is that it's autonomous, using artificial intelligence to operate with very little human interaction. The company is very young, so investors will need to see how it performs over the coming quarters. If SentinelOne doesn't need as many people to operate, its profit margin could improve as revenue grows because revenue would outpace SentinelOne's expenses. 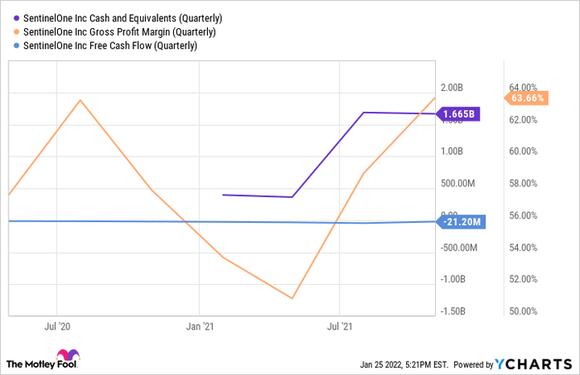 The company's non-GAAP (adjusted) gross margin was 67% in Q3, 9 percentage points higher year over year, which could continue going up over time. Meanwhile, the company has $1.6 billion in cash on its balance sheet while burning just $21 million in Q3 (negative free cash flow illustrated in the chart above).

SentinelOne seems in little danger of running out of money and could increase its marketing spend, leading to continued strong revenue growth.

The company's strong revenue growth and rock-solid financials make it easy to see why the stock has been so expensive. The stock traded at a forward price-to-sales (P/S) ratio as high as 100 before the sell-off began in November 2021. One could understand paying a premium for quality stocks, but that is a very expensive valuation and one that I wasn't willing to pay. 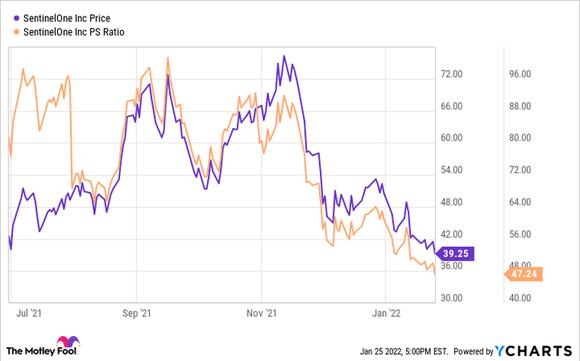 Fast-forward to now, and the forward P/S has dropped to under 40. Is SentinelOne a bargain at this lower valuation? No, I don't think that's an easy argument to make. But it's probably fair to say that it's at least interesting at this point. If you're patient enough, a company growing at a triple-digit pace can quickly grow into a valuation.

High inflation has the market spooked about the potential for rising interest rates, which can negatively impact the valuation of stocks . Investors should be rooting for SentinelOne to keep falling; a lower valuation would set the stock up to produce significant returns moving forward. But remember, nobody knows when the bottom in a market correction will come, so consider dollar-cost averaging into SentinelOne or any stock you like so you don't miss your chance.

10 stocks we like better than SentinelOne, Inc.
When our award-winning analyst team has a stock tip, it can pay to listen. After all, the newsletter they have run for over a decade, Motley Fool Stock Advisor , has tripled the market.*

They just revealed what they believe are the ten best stocks for investors to buy right now... and SentinelOne, Inc. wasn't one of them! That's right -- they think these 10 stocks are even better buys.

These stocks have great long-term prospects.
MARKETS・2 DAYS AGO
The Motley Fool

E-commerce has fallen out of favor with some investors but the long-term opportunity is undeniable.
STOCKS・2 DAYS AGO
The US Sun

Two of the legendary investor's recent purchases especially stand out.
STOCKS・8 HOURS AGO
The Motley Fool

If You've Been Burned by Tech Stocks, Try These 3 ETFs Instead

Many investors have found that a simpler, safer approach actually yields better returns.
STOCKS・2 DAYS AGO
The Motley Fool

The Chinese tech giant's growth has nearly stalled out.
STOCKS・2 DAYS AGO
The Motley Fool

3 Types of Optional Auto Insurance That Are Probably Worth Buying

Drivers should consider getting this coverage even though it is not required.
CARS・1 DAY AGO
The Motley Fool

Few ideas in the cryptocurrency space are this big.
MARKETS・7 HOURS AGO