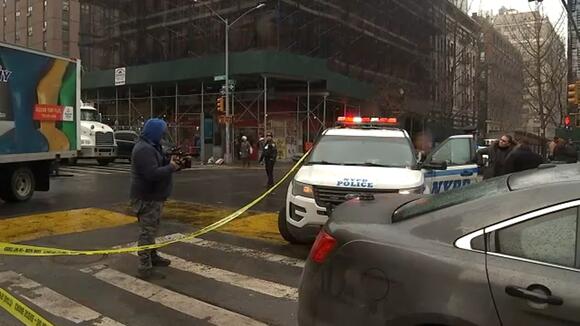 As a large portion of NYPD gathered for the funeral of fallen Officer Jason Rivera Friday morning, an off-duty officer working security at an Upper West Side drug store shot a suspect who police say had just stabbed a man. The officer was employed at a Duane Reade at West 94th Street and Broadway when he saw two men, ages 42 and 66, in a dispute near the entrance of the store. He told the two men to take the dispute outside, and police say the 42-year-old man pulled out a gravity knife and stabbed the 66-year-old man in the chest. ALSO READ | Parents livid after 9-year-old girl left locked outside New Jersey school in cold

Toni Yates has more from the mother of the child left alone in the cold.

The suspect then fled on foot, with the off-duty officer in pursuit. When the suspect got the corner of West 94th Street and Amsterdam Avenue, he turned towards the officer while refusing to drop his knife. The officer pulled his service weapon and fired at least five shots, hitting the man -- who is apparently homeless -- in the arm and the hip. He was taken to St. Luke's and is expected to survive. His knife was recovered at the scene. ALSO READ | 75-year-old post-Holocaust letter detailing family's death found at NY flea market

The man who was stabbed was also taken to the hospital, as was the officer. What sparked the initial dispute is unclear, but there is speculation it may have had to do with shoplifting. ---------- * Get Eyewitness News Delivered * More Manhattan news * Send us a news tip * Download the abc7NY app for breaking news alerts * Follow us on YouTube

The pain is piercing to know that her 11-year-old daughter, Kyhara was another victim of gun violence.
BRONX, NY・18 HOURS AGO
ABCNY

Police in Long Branch, New Jersey imposed a 9 p.m. curfew after a crowd got out of hand at Pier Village.
LONG BRANCH, NJ・18 HOURS AGO

Rachel Nugent, 14, was last seen leaving her residence located at 551 Old Dock Road in Kings Park at approximately 6:45 a.m. Investigators believe she may have taken a train to New York City and may have traveled out of state.
SUFFOLK COUNTY, NY・1 DAY AGO
ABCNY

The officers' vehicle was struck by a black Mercedes at the intersection of Dyckman Street and Nagle Avenue in Inwood just after 5:30 a.m. Friday.
MANHATTAN, NY・2 DAYS AGO
ABCNY

Police say the alleged gunman was nabbed at a friend's house in the Bronx. He is charged with murder, manslaughter and two counts of criminal possession of a weapon.
BRONX, NY・1 DAY AGO

Video shows the man throwing traffic cones at the vendors cart and yelling at him.
NEW YORK CITY, NY・1 DAY AGO
ABCNY

Three people were killed and several others were injured in a crash near a catering hall on Long Island, according to police.
NEW HYDE PARK, NY・11 HOURS AGO
ABCNY

A puppy that was snatched from a pet store in New Jersey has been returned unharmed.
MIDDLETOWN, NJ・18 HOURS AGO

A man died after he collapsed at the finish line of the Brooklyn Half Marathon Saturday.
BROOKLYN, NY・1 DAY AGO
ABCNY

The employees' scaffolding suddenly stopped moving and got stuck. It happened Friday just after 8 a.m. at 712 Fifth Avenue in Manhattan.
MANHATTAN, NY・2 DAYS AGO
ABCNY

Authorities say a suspect in a stolen Honda CRV struck an occupied police vehicle that was pulled over on the side of the road before colliding with another vehicle and hitting several pedestrians.
PATERSON, NJ・3 DAYS AGO
ABCNY

The arrests were part of Operation Long Island Wave, and those arrested were wanted for offenses including homicide, attempted murder, narcotics, weapons offenses, robbery and assault.
LAW ENFORCEMENT・3 DAYS AGO