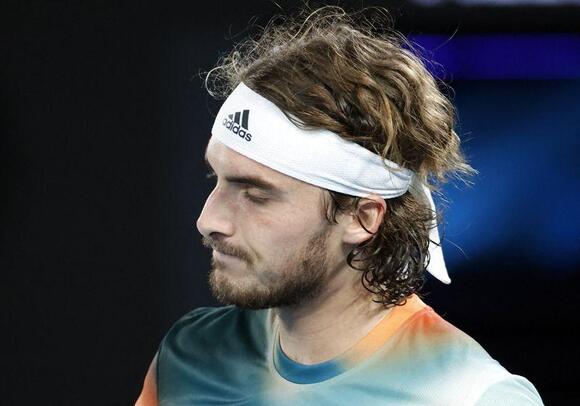 MELBOURNE (Reuters) - Stefanos Tsitsipas feels he is unfairly targetted by officials over on-court coaching and said that it should be allowed anyway, after his Australian Open semi-final loss to Daniil Medvedev on Friday.

During his defeat to Medvedev at the Rod Laver Arena, the Greek world number four was cautioned by the chair umpire in the fourth set for being coached by his father Apostolos from the stands - which is against the rules.

Tsitsipas had also received a similar warning during his third-round win over Benoit Paire at Melbourne Park.

“I wasn’t,” the 23-year-old told reporters when asked if he was being coached. “I cannot hear anything when I’m playing. It’s impossible. Having the crowd being so loud in every single point, you have to have super hearing to be able to hear what your coach says.

Medvedev lost his temper late in the second set and railed at the umpire for not penalising Tsitsipas.

The Greek said he found Medvedev’s behaviour “funny” and did not pay attention.

“I know players like to do this stuff to throw you off mentally. Could be maybe a tactic. It’s all right. He’s not the most mature person anyways,” a smiling Tsitsipas said, adding that he was not the sort of person to listen to any advice while competing.

Tsitsipas said he has discussed it with his father and was “pretty sure” he will keep receiving warnings.

“My father, he’s a person that when he gets into something when there is a lot of action, his medicine is to talk, and you can’t stop it. It’s something that he does from nature,” the French Open finalist said.

“I’ve talked to him about it. I’ve tried, spent countless hours trying to figure it out with him, but it’s part of him.

“That was also one of the reasons last year I went out publicly on one of my social media platforms and said that I think coaching should be allowed, simply because coaches do it anyway. Most of them get away with it, and they do it pretty smartly, I can tell you.”

PARIS, May 19 (Reuters) - Richard Gasquet's own expectations of shining at Roland Garros are so low that he has already lined up a job as a pundit for French TV at this year's claycourt major, where the local hopefuls are geared up for another dire collective performance. With French...
TENNIS・2 DAYS AGO
Reuters

TURIN, Italy, May 21 (Reuters) - Olympique Lyonnais' striker Ada Hegerberg put almost two injury-plagued years behind her to power them to an eighth Women's Champions League title with a 3-1 win over Barcelona in which she scored one goal and made another in a thrilling battle. The competition's all-time...
SOCCER・14 HOURS AGO
Reuters

Woods unsure of finishing PGA Championship after nightmare round

TULSA, Oklahoma, May 21 (Reuters) - After narrowly making the PGA Championship cut a defiant Tiger Woods had predicted he still had a chance to hoist the Wanamaker trophy but any remaining belief disappeared in a nightmare nine-over 79 third round on Saturday. Playing his second event in a comeback...
TULSA, OK・15 HOURS AGO
Reuters

ATHENS, May 21 (Reuters) - Panathinaikos beat PAOK 1-0 to clinch the Greek Cup on Saturday in match marred by crowd trouble as rival fans threw flares and clashed with police inside the Olympic stadium. Violence broke out an hour before the match was due to start as spectators began...
SOCCER・17 HOURS AGO

TULSA, Oklahoma, May 21 (Reuters) - Unheralded Mito Pereira became the first Chilean to lead a major, surging three shots clear at the top of the PGA Championship third round leaderboard on Saturday, while Tiger Woods withdrew after sinking to the bottom of table. Playing in just his second major,...
TULSA, OK・12 HOURS AGO
Reuters

May 22 (Reuters) - Jamie Maclaren struck two minutes into extra-time to take Melbourne City into an A-League grand final meeting with Western United next week as the defending champions handed Adelaide United a 2-1 defeat in their playoff semi-final on Sunday. Maclaren, the A-League's leading scorer during the regular...
SPORTS・3 HOURS AGO
Reuters

Chadwick takes her fifth win in a row in W Series

BARCELONA, May 21 (Reuters) - Two times W Series champion Jamie Chadwick took her fifth win in a row, and her third of the season, to extend her lead in the all-female championship at Barcelona's Circuit de Catalunya on Saturday. The victory from pole position in the Spanish Grand Prix...
MOTORSPORTS・19 HOURS AGO
Reuters

Underdogs take a bite out of experienced field at PGA Championship

TULSA, Oklahoma, May 21 (Reuters) - The PGA Championship's underdogs had plenty of bite heading into Sunday's final round in Tulsa, with none of the top four having ever won a PGA Tour event - let alone a major title. Miserable conditions thrashed former major winners at Southern Hills Country...
TULSA, OK・8 HOURS AGO