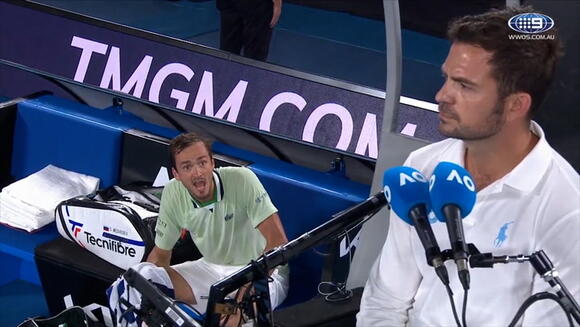 Medvedev’s 7-6 (5) 4-6 6-4 6-1 victory means he will play for a second successive grand slam title after his maiden success at the US Open last summer.

It is also the second year in a row he has made the final at Melbourne Park, having lost to Novak Djokovic 12 months ago.

But much of the attention will focus on Medvedev’s extraordinary rant at the umpire late in the second set, when he accused Tsitsipas of receiving coaching from his father Apostolos.

“I don’t think bad emotions help me too much,” he said afterwards. “Many times I lose the match because of this. As soon as I’d done it I was like, ‘That was a big mistake’, but I’m happy I managed to re-concentrate at the beginning of the third set. I tried my best and I’m happy it worked.”

Tsitsipas Senior has been repeatedly warned for coaching - and was later in this match as well - but it was mainly an indication of just what this match meant to Medvedev.

There is bad blood between the world number two and Tsitsipas dating back to a fiery clash in Miami four years ago and exacerbated by their very different characters.

Medvedev thrives off confrontation, while Tsitsipas is a far more sensitive and introverted man who found it difficult to handle the vitriol that was generated from the row over his long toilet breaks at the US Open last year.

This was their ninth meeting and second in a row in the semi-finals here, with Medvedev winning comfortably 12 months ago after Tsitsipas’ big victory over Nadal.

The Greek came into the tournament with doubts over his fitness following elbow surgery, but he was in top form against Jannik Sinner in the quarter-finals, while Medvedev survived an almighty scrap against Felix Auger-Aliassime, recovering from two sets down and saving a match point.

There was almost nothing to choose between them in a high-quality first set, but it was Medvedev who came from 4-1 down to take the tie-break.

The Russian then retrieved an early break in the second before a double fault to drop serve again and a warning for a visible obscenity prompted his meltdown after nine games.

“His father can talk every point,” screamed Medvedev at Jaume Campistol. “Are you stupid? I’m talking to you, look at me. How can you be so bad in the semi-final of a grand slam?”

After Tsitsipas clinched the set, Medvedev had more words with Campistol regarding his coaching complaints, ending by calling the official a “small cat”. 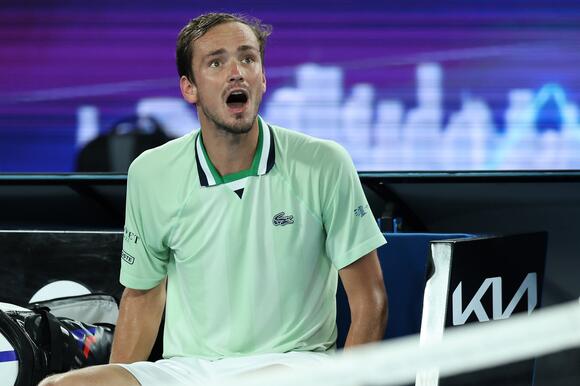 Both men left the court for bathroom breaks, and Medvedev composed himself just in time to save two more break points in the opening game of the third set.

Tsitsipas and Medvedev are very different tennis players as well as people and this was a compelling contest between the aggressive, flashy Greek and the defensive skills of the second seed.

The pressure gradually grew on Tsitsipas, though, and his resistance ran out in the 10th game, Medvedev clenching his fist at the decisive breakthrough.

By the fourth set, Tsitsipas was a spent force, shots that had found the lines in the opening two hours of the contest now sailing long and wide as Medvedev surged into his fourth grand slam final.

He lost once to Nadal and once to Djokovic before denying the Serbian the calendar Grand Slam in New York and a record 21st slam title.

Tiger Woods struggled to keep a calm head at the PGA Championships, losing his cool in an altercation with a cameraman. The golf legend didn’t have the best of starts on the opening day, stumbling to a 74 which is his worst start to a PGA since 2015. Woods...
GOLF・1 DAY AGO
The Independent

PGA Championship 2022 LIVE: Leaderboard and latest updates as Rory McIlroy and Tiger Woods out on course

Follow all the action as Rory McIlroy is among the late starters in the second round of the PGA Championship at Southern Hills. The Northern Irishman finally got off to the flying start he’s been missing at the majors in recent years, with a spectacular round of 65 on Thursday giving him a slender advantage over a strong chasing pack. That lead was eliminated early on Friday as Justin Thomas overcame testing conditions to post his second consecutive round of 67 and set a clubhouse target of -6.McIlroy will try to overhaul that total over the course of his...
GOLF・8 HOURS AGO
The Independent

Tiger Woods set his sights on claiming an improbable fifth US PGA Championship after making the halfway cut at Southern Hills.Woods looked set for an early exit following a double bogey on the 11th hole of his second round, but played the last seven holes in two under par to qualify for the weekend.And despite being 12 shots off the lead held by Will Zalatoris, Woods took inspiration from the 63 recorded by two-time Masters champion Bubba Watson on Friday as he planned to climb the leaderboard.Heart and determination.@TigerWoods finishes his round at +3 overall and is projected to make...
GOLF・6 HOURS AGO
The Independent

Rory McIlroy failed to take advantage of a favourable draw before hailing Tiger Woods as the “ultimate pro” for fighting back to make the halfway cut at the PGA Championship.McIlroy could only add a second round of 71 to his opening 65 at Southern Hills, despite being part of the early-late wave of players who enjoyed by far the best of the conditions over the first two days in Tulsa.That left the four-time major winner five shots off the pace set by Will Zalatoris, who compiled a flawless 65 in the group ahead of McIlroy to enjoy a one-shot lead...
TULSA, OK・6 HOURS AGO