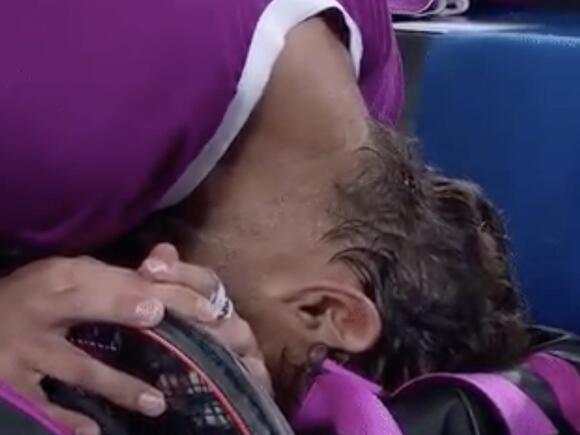 An emotional Rafael Nadal sealed a triumphant return to Grand Slam finals and put himself one match away from becoming statistically the greatest ever men's tennis player with a resounding win Friday against Matteo Berrettini.

Nadal's participation in the 2022 Australian Open was in doubt just weeks before the tournament, but he beat Italy's Berrettini in four sets at the Rod Laver Arena in Melbourne to secure a first Grand Slam final berth since winning the French Open in October 2020.

After the victory, Nadal ran the full gamut of emotions, first screaming in delight and pumping his fists, before breaking down in tears as the enormity of his feat began to sink in.

As Nadal returned to his seat at courtside he buried his head in one of his racket bags, seemingly in an attempt to stop the crowd seeing his tears.

Nadal's victory was particularly emotional given both its potential significance in his pursuit of a record-breaking 21st Grand Slam win, and doubts over whether he'd even make it to the tournament.

The Spaniard missed a large chunk of the 2021 season — including Wimbledon, the US Open, and the Tokyo Olympics — due to a foot injury.

Speaking after the match, Nadal was asked about his emotional reaction to victory, and what was going through his head as he broke down on the court.

"I don't know," he told reporters.

"As I said, no, I went through a lot of challenging moments, a lot of days of hard work without seeing a light there. But still working and still receiving plenty of support from my team and from my family too, without a doubt."

"I really can't explain in words how important it is for me in terms of energy, in terms of personal satisfaction, in terms of being very thankful for all the support that I received from the fans and especially from the people really close to me," he said of the victory.

Alongside his injury woes, Nadal also suffered a bout of COVID in late 2021, which again put his Australian Open participation at risk.

On Friday, however, Nadal showed no signs of the struggles he had to make it to Melbourne, dominating the 25-year-old Berrettini, praying on the Italian's weaker backhand to power to victory, winning 6-3, 6-2, 3-6, 6-3.

"I started the match playing great. The first two sets were one of the best so far since a long time. Then I know how good Matteo is, he is a very solid player, very dangerous," Nadal said after the match.

"In the third I know at some point he is going to go for the shots."

Berrettini, for his part, was magnanimous in defeat.

"We chatted a little bit in the locker room. He told me that it was a great run, and I told him again, bravo. It's just really nice for me to talk to him and have this kind of conversation, because I'm still learning from him, and it's good."

Nadal will now play the winner of the second semifinal between tournament favorite Daniil Medvedev and Greece's Stefanos Tsitsipas on Sunday.

Victory will take Nadal to 21 Grand Slam singles titles, one more than both his great rivals, Roger Federer and Novak Djokovic.

he is such a wonderful guy and he has every right to be emotional. he is a gentleman, adores his family and is so humble, unlike most men.

He's one of the hardest working athletes PERIOD! Every time I see him win or loose there's nothing left in the tank! I respect that!