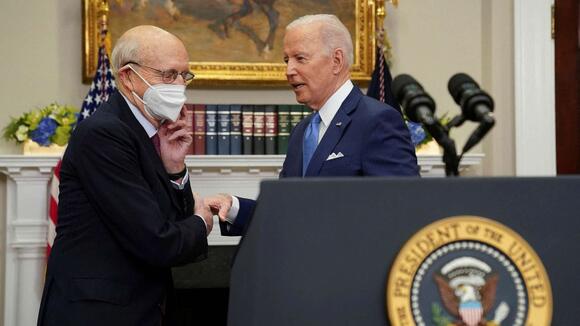 The TAKE with Rick Klein

President Joe Biden seemed nostalgic for a bygone era -- "in those days, we tried to do things together" -- in celebrating the career of Justice Stephen Breyer at Breyer's formal retirement announcement on Thursday.

There will be no throwbacks when it comes to confirming Breyer's replacement , whom Biden has committed to name by the end of February. But there are early reasons to think the recent streak of scorched-earth battles followed by near-party-line votes could be broken.

Both parties see reasons to turn down the temperature. Democrats, of course, want to deliver quickly on a central promise that has the added benefit of making history, given the president's commitment to name a Black woman.

Republicans see an upside in making vulnerable Democrats own Biden's pick, and few things fire up small-dollar donations like a Supreme Court vacancy. Still, confirming a new justice won't chip away at the conservatives' 6-3 majority, and if Democrats are united, Biden will get his choice confirmed no matter what GOP senators do about it.

While vetting brings up inevitable twists and turns, leaders in both parties see the near future and don't particularly mind an easy confirmation. The predominant conservative worldview is that the high court is about to deliver on an array of huge issues this year -- and they also happen to like their chances in taking back the Senate this fall.

Getting even a few Republican senators to vote to confirm a new justice will be a monumental lift. But it's notable that in this supercharged and divisive political era, it's possible that the coming push for confirmation is defined by a mutual de-escalation.

The RUNDOWN with Averi Harper

"The President must not outsource this important decision to the radical left," McConnell said in a statement.

"If anyone is saying they plan to characterize whoever he nominates after thorough consideration with both parties as radical before they know literally anything about who she is, they just obliterated their own credibility," Psaki said at Thursday's press briefing.

McConnell's call for Biden to refrain from "outsourcing" the search process stands in conflict with Republican efforts to reshape the judiciary during the Trump administration.

It is no secret that the conservative legal group The Federalist Society played a pivotal role in identifying the scores of judges Trump put on the bench, including the three nominees who ascended to the nation's highest court during his term.

Biden said Tuesday he would consult both Democratic and Republican senators, as well as Vice President Kamala Harris during the process.

The TIP with Alisa Wiersema

After Biden told reporters last week he plans to get out of Washington, D.C., more frequently, the president heads to Pittsburgh on Friday, where he will promote the policy achievements of his administration. The trip to Pennsylvania -- the state that landed him the presidency -- is his second visit of the year to a 2022 midterm battleground .

But the move also comes as the president bears the burden of low approval ratings during a crucial election cycle in which Democrats are defending their Senate majority. The overlap could put a sharper spotlight on which Democratic candidates appear with Biden on the campaign trail.

According to an AP report, at least one Senate candidate plans to attend the event -- Rep. Conor Lamb, who represents a western-Pennsylvania district in Congress. Meanwhile, others tell ABC News they support the president's efforts but will not be in attendance.

"It's great that President Biden is coming to Pittsburgh to talk about infrastructure. If infrastructure is Elvis, then Pittsburgh is Graceland. It's great to come to the city that helped build America to talk about rebuilding America. I'll be in Harrisburg on Friday meeting with Democrats from across the commonwealth at State Committee and talking about the 2022 midterm election," said Lt. Gov. John Fetterman.

Pennsylvania state Rep. Malcolm Kenyatta said he attended a Zoom meeting with the president and a small group of his early supporters last week to mark the one-year anniversary of his presidency, but would not be in attendance for Friday's event. "I welcome the President back to Pennsylvania; every time he is on the road talking about the basic bargain is a good thing for Democrats and for the country," Kenyatta said.

NUMBER OF THE DAY, powered by FiveThirtyEight

42%. That's how many Ukrainians say they had a positive feeling toward Russia in data compiled from the Kyiv International Institute of Sociology . Given the current situation at Ukraine's border with Russia, that's not necessarily surprising, but it is part of a long, ongoing trend. That is, since Russia annexed Crimea in 2014, beginning a long, grinding war on Ukraine's eastern border, public opinion toward Russia has been increasingly negative in the country. Read more from Amelia Thomson-DeVeaux on how Ukrainians are feeling about the escalation with Russia.

ABC News' "Start Here" Podcast. On Start Here Friday morning, ABC's Mary Bruce guides us through President Biden's thinking for his Supreme Court nominee. Then, ABC's Kiara Alfonseca takes a look at the debate over what should be taught in schools and what lessons two districts have decided NOT to teach. And finally, ABC's Stephanie Ebbs explores how our gas stoves could be contributing to climate change. http://apple.co/2HPocUL

WHAT YOU NEED TO KNOW THIS WEEKEND

Download the ABC News app and select "The Note" as an item of interest to receive the day's sharpest political analysis.

The Note is a daily ABC News feature that highlights the day's top stories in politics. Please check back Monday for the latest.

How do you vow to pick a particular race and gender when you don't have a clue if you can find that race and gender that have the qualifications for the job. This is what happens when you have a president and vp that are not qualified for the job themselves.

the only thing biden is committed to is tearing down every step of progress trump made in bringing production back to our shores. it's all about money and investments. globalization is not good for our nation, it only helps the rich get richer by using cheap foreign labor and materials.

Harvard polled Americans under 30 who are likely to vote in the midterms and found 85% of them want some government action on student loan debt.
PRESIDENTIAL ELECTION・29 DAYS AGO
Newsweek

Individual judges may not like the policy choices of the Biden administration, but it is not their job to weigh in on that policy debate.
TEXAS STATE・29 DAYS AGO
Fox News

Florida Republicans have compared a protest against a newly drawn congressional map that dilutes Black voter strength in the state to the violent attempt to overturn the results of the 2020 presidential election on 6 January, 2021.On 21 April, a small group of mostly Black Democratic legislators staged a sit-in protest in the middle of the House floor, singing and praying and briefly delaying votes during a special legislation convened by Republican Governor Ron DeSantis, whose map eliminates two of the state’s four districts represented by Black Democrats and creates four more districts that lean Republican.State Rep Randy Fine...
PROTESTS・29 DAYS AGO
Business Insider

Russian President Vladimir Putin on Monday accused Western intelligence services, specifically the CIA, of advising Ukraine on how to assassinate a senior Russian propagandist, Vladimir Solovyov. While Putin said his Federal Security Service disrupted the plot against Solovyov, the evidence for the plot's existence is far from convincing. After all,...
POLITICS・29 DAYS AGO
Business Insider

In an interview with Russian TV, Sergei Lavrov said that Russia is essentially at war with NATO. This rhetoric has some worried that Russia may use nuclear weapons in Ukraine. Lt. Col. Dakota Wood weighed in on the likelihood of this happening.
POLITICS・28 DAYS AGO

House Republican Leader Kevin McCarthy (R-CA) (Joe Raedle/Getty Images) There was a flurry of headlines last week when news broke that House Minority Leader Kevin McCarthy (R-CA) said out loud that he thought former President Donald Trump should resign in the wake of the deadly Jan. 6 insurrection. The focus was on the fact that McCarthy lied about ever expressing that thought - until, of course, he was confronted with the audio recording of him saying exactly that.
CONGRESS & COURTS・28 DAYS AGO
BuzzFeed News

Thomas Webster’s trial kicked off with dueling videos from the Capitol and competing theories of what they showed.
LAW ENFORCEMENT・27 DAYS AGO
ABC News

After Perdue tells Abrams to 'go back where she came from,' she says Republicans just 'deflect'

Stacey Abrams, a Black Democrat running for Georgia governor, declined on Tuesday to directly comment on Republican David Perdue saying she should "go back to where she came from." "No, not at all," Abrams, said at a news conference in Atlanta, when asked by ABC News whether she wanted to...
GEORGIA STATE・9 HOURS AGO
TheWrap

In a surprise to no one, Kimmel devoted much of his opening monologue on Monday’s “Jimmy Kimmel Live!” to roasting Marjorie Taylor Greene after the far-right congresswoman testified last week in a Georgia court about her role in the Jan. 6 Capitol riot. Kimmel — who was...
WASHINGTON, DC・28 DAYS AGO