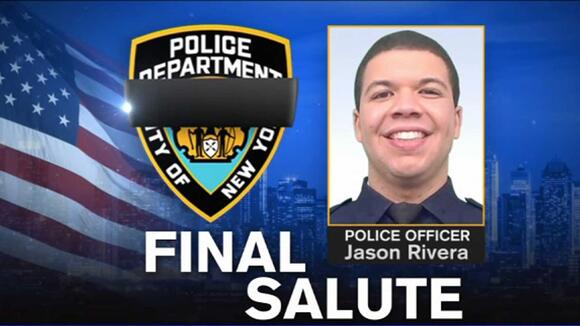 A solemn final farewell was held Friday morning for the first of two police officers murdered in the line of duty. A police presence was already in place before dawn outside St. Patrick's Cathedral for the funeral of NYPD Officer Jason Rivera. Friday marks the second day of services for the officer. His remains were escorted into the cathedral on Thursday, wrapped in a green and white NYPD flag. He was just 22 years old, and he only joined the force last year. The NYPD rookie was just starting life. He just got married in October. His widow Dominique delivered a moving eulogy for her husband, which recounted their last day together. They had a fight that morning about him using his work phone when they were together, but theirs was a love story that began in elementary school. Watch Dominique Luzuriaga's full eulogy

"Today I'm still in this nightmare that I wish I never had, full of rage and anger, hurt, sad, and torn. Although I gained thousands of blue brothers and sisters, I'm the loneliest without you," she said. Directing her emotions at the new Manhattan District Attorney Alvin Bragg, she said, "The system continues to fail us. We are not safe anymore, not even members of service. I know you were tired of these laws, especially from ones from the new DA. I hope he is watching you speak through me right now. I'm sure all of our blue family is tired too. But I promise your death won't be in vain. We'll take the watch from here." Mayor Eric Adams , also delivered a moving eulogy. The mayor called Officer Rivera a hero, and apologized to his family. "Today we salute police officer Jason Rivera for the last time," said Adams. "His journey by our side has ended. He takes another path."

The mayor and Rivera's widow's eulogies were two of seven. Eulogies were also delivered by Police Commissioner Keechant L. Sewell, Inspector Amir Yakatally, PBA President Patrick J. Lynch, Rev. Jonathan J. Recabarren, and Jason's older brother, Jeffrey Rivera. In addition, Police Commissioner Sewell posthumously promoted Rivera to detective, presenting the shield to his family in a solemn tradition of NYPD funerals. "Jason rose to every challenge that crossed his path," said Sewell. "He was everything the city and the NYPD needed him to be. And it is with sincere admiration and appreciation that I promote him today to Detective First Grade."

Officer Rivera's partner, Officer Wilbert Mora, was killed in the same ambush last Friday in Harlem. They were responding to a domestic violence call. Officer Mora's viewing and funeral will take place at St. Patrick's next Tuesday and Wednesday. Friday's funeral was open only to invited guests, but the public was invited to pay tribute as Officer Rivera's remains were taken to a cemetery in Westchester County across various overpasses in Yonkers.

Sending my condolences, and Prayers to the family ( NYPD Praying for your strength and protection) Thank you for your service 💐💌💙💙💙💙🫂👮🏼👮🏽👮👮🏽‍♀️👮🏽‍♂️🙏

Jurors found a man guilty of all charges for murdering a woman he briefly dated. “I’m still alive,” Brandon Roberts, 29, yelled Tuesday as judicial marshals took him from that courtroom in Bridgeport, Connecticut, according to The Connecticut Post. He shot therapist Emily Todd, 25, in the back...
26 DAYS AGO
The Independent

The youngest victim of a family of four stabbed to death at home in southeast London had moved in just days earlier, it has emerged as a murder suspect remains in hospital.Grandmother Dolet Hill, 64, her partner Denton Burke, 58, daughter Tanysha Ofori-Akuffo, 45, and granddaughter Samantha Drummonds, 27, were all found dead inside the terraced house in Delaford Road, Bermondsey, after officers forced entry at about 1.40am on Monday.It has since emerged Samantha, the daughter of Tanysha, reportedly told a neighbour she was returning to the family home in Bermondsey for a week while she had some work done...
PUBLIC SAFETY・26 DAYS AGO
CBS Baltimore

BALTIMORE (WJZ) — Baltimore Police released images Tuesday of seven people of interest in the fatal shooting of a Fells Point bouncer early Monday morning. Marco Nunez, the 30-year-old bouncer of Rodos Bar, was found with multiple gunshot wounds in the 1700 block of Thames Street around 1 a.m. Monday. He was pronounced dead at Johns Hopkins Hospital. Homicide detectives are looking to identify and question three men and four women pictured in a release: female 1a, BPD female 2, BPD female 3 and male 2, BPD female 4, BPD male 1, BPD male 2a, BPD male 3a, BPD Male 3b, BPD Baltimore Police urge anyone who recognizes the people to call detectives at (410) 396-2100. Governor Larry Hogan on Tuesday announced the state will match the Metro Crime Stoppers’ $8,000 reward for information in the slaying, doubling the reward to $16,000. Tips can be sent to Metro Crime Stoppers Maryland at 1-866-756-2587.
26 DAYS AGO
ABCNY

The girl, an innocent bystander who was a half block away when the gunfire erupted, is identified as 11-year-old Kyhara Tay of the Bronx.
BRONX, NY・5 DAYS AGO

One teenager is dead and another was rescued after being trapped beneath a sand collapse at a beach in New Jersey on Tuesday.
TOMS RIVER, NJ・4 DAYS AGO
ABCNY

Four days after Suffolk Police said they do not believe Shannan Gilbert was part of the murders of sex workers committed by the Long Island Serial Killer at Gilgo Beach, Gilbert's sister tells Eyewitness News she still believes someone killed her sister.
SUFFOLK COUNTY, NY・4 DAYS AGO