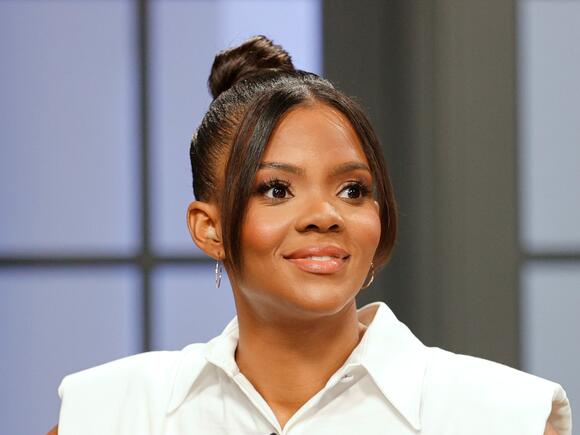 Conservative critic Candace Owens was mocked online after she suggested that Americans wanted her to be the next Supreme Court justice following the retirement of Stephen Breyer .

Ms Owens noticed her name was trending on Twitter and asked in a tweet: “Am I really trending because America wants me to be the next Supreme Court justice? What an honour! (sic).”

Shortly after president Joe Biden announced he would nominate his pick for the Supreme Court to fill Mr Breyer’s seat before the end of February, she again took to Twitter to share her remark.

During his campaign for the presidency, Mr Biden had pledged to nominate the first Black woman to serve on the nation’s highest court if a vacancy opened during his term in office.

“It would be my absolute honour to accept this nomination on behalf of the American people. I assure you I meet all the necessary qualifications as I am both black and female,” she wrote in another tweet on Thursday.

Ms Owens added that she looked forward to “establishing further communication with the Biden administration”.

Twitter users, however, were quick to correct her and said she wasn’t trending for that reason.

“I think Tyler Perry is ahead of you in line,” wrote The Simpsons voice actor Harry Shearer.

“Eating butter biscuits and being a white supremacy apologist are not the skill sets for Supreme Court Justice, more like court jester,” wrote Bishop Talbert Swan in a tweet.

Advocate and activist Markus Batchelor responded to Ms Owens with a gif.

“NOT A PARODY: I actually thought this was a parody until I noticed the blue check next to Candace Owens’ name,” said user Samia Ali Salama.

“He [Joe Biden] literally said the person has to have extraordinary qualifications, character, integrity, and experience. You meet NONE of those prerequisites. Not even close,” wrote another user.

“They’re taking all of these things that nobody was offended by, acting like they have to get rid of them and destroy them because they’re bored. They’re absolutely bored,” she said.

Ms Owens further argued that “they’re trying to destroy fabrics of our society”, without taking names.

Disneyland Paris first announced the new look on Tuesday on Twitter with a picture of Minnie Mouse in her outfit designed by Stella McCartney.

Unfortunate that Candace is a college dropout, let alone lacks a law degree or any germane experience. All that aside,, her politics don't align very closely with those of the President. Her statements indicate she is really out of touch...unless she is joking?

The joke went right over your Dimms heads. Brandon stated he wanted a black woman for SCOTUS. She fits his description perfectly

The left is terrified of an intelligent, competent black woman like Candace Owens. They will find anything to try to denigrate her. They just destroy their own credibility with childish hit pieces like this. The morons don't even see the humor in what she said much less understand the irony of it.

When President Joe Biden named Kamala Harris as his running mate, he promised his former campaign rival would be one of the most influential voices in the White House.
PRESIDENTIAL ELECTION・29 DAYS AGO
Newsweek

Individual judges may not like the policy choices of the Biden administration, but it is not their job to weigh in on that policy debate.
TEXAS STATE・29 DAYS AGO
The Independent

Pelosi pushes back on archbishop who denies her Communion

House Speaker Nancy Pelosi pushed back Tuesday on the decision by San Francisco's conservative Catholic archbishop to deny her Communion over her support of abortion rights, saying she respects that people have opposing views but not when they impose them on others.The California Democrat says she comes from a large family with many members who oppose abortion. “I respect people’s views about that. But I don’t respect us foisting it onto others.” Pelosi added, “Our archbishop has been vehemently against LGBTQ rights. In fact he led the way in an initiative on the ballot in California.”Pelosi made her comments...
SAN FRANCISCO, CA・13 HOURS AGO
NBC News

MEXICO CITY — Mexican President Andrés Manuel López Obrador on Monday urged U.S. Latinos not to vote in November’s midterm elections for politicians who have “mistreated” them, in response to a comment by former U.S. President Donald Trump. Trump boasted at a rally in...
PRESIDENTIAL ELECTION・28 DAYS AGO

Greene testified on Friday that she didn't recall whether she asked Trump to invoke military rule, despite telling Meadows to relay the idea to Trump.
ATLANTA, GA・29 DAYS AGO
CNN

CNN — Sarah Huckabee Sanders will win the GOP nomination for governor of Arkansas, CNN projects, putting her in strong position to win the governorship in this red state in November. The 39-year-old former Trump White House press secretary enjoyed the support of former President Donald Trump and easily...
ARKANSAS STATE・13 HOURS AGO
WashingtonExaminer

Former Trump lawyer Michael Cohen threw his former boss under the bus on Monday, appearing to contradict claims that the former president does not possess the documents New York Attorney General Letitia James is after.
POTUS・28 DAYS AGO
Fox News

Robin Roberts has spoken candidly about why she nearly turned down an opportunity to interview Barack Obama about marriage equality.The Good Morning America host, 61, discussed her 2012 interview with former president Obama during an appearance on The Ellen DeGeneres Show, where she revealed that she had concerns about the interview and her sexuality, as she didn’t want to be “outed” as gay because of the conversation.“In 2012, I got a call to go to the White House, and that there was a possibility that then-president Barack Obama would change his stance on marriage equality,” Roberts recalled to DeGeneres. “I...
CELEBRITIES・29 DAYS AGO
The Independent

An ex-Fox News reporter says Joe Biden should be “taking some names and putting people in jail” over the right-wing’s great replacement theory.Carl Cameron told MSNBC that he believes his former employer and star host Tucker Carlson participate in the same kind of dangerous rhetoric that reportedly inspired the mass shooting in Buffalo.Ten people were killed and three wounded by a teenage gunman during the allegedly racially-motivated attack in the New York city over the weekend.MSNBC’s Nicole Wallace asked Cameron, who was a chief political correspondent for Fox News until 2017, how “the ideology left in the mass shooter’s...
PUBLIC SAFETY・1 DAY AGO
The Independent

‘This is going to get ugly’: Tucker Carlson slams former Fox reporter who said he should be in jail

Co-host of “Outnumbered” and former White House Press Secretary Kayleigh McEnany joins Fox Across America With Jimmy Failla to share her thoughts on the hysteria by some Democrats and members of the mainstream media over Tesla CEO Elon Musk acquiring Twitter. “They don’t they don’t fear Twitter becoming...
INTERNET・28 DAYS AGO
The Independent

Trump laughs at prospect of Pence face-off in 2024 run: ‘That wouldn’t be a problem’

Former president Donald Trump on Thursday appeared unconcerned about the prospect of facing his former Vice President, Mike Pence, in a 2024 presidential primary matchup.Mr Pence has not declared that he will be a candidate for the presidency in 2024, but in a recent interview with The New York Times said he and his wife, Karen, would “go where we are called”. He has also previously said he would not be deterred from a 2024 campaign by the possibility that Mr Trump would enter that race as well.But the twice-impeached ex-president laughed off the possibility of having to campaign...
PRESIDENTIAL ELECTION・11 HOURS AGO
TheWrap

In a surprise to no one, Kimmel devoted much of his opening monologue on Monday’s “Jimmy Kimmel Live!” to roasting Marjorie Taylor Greene after the far-right congresswoman testified last week in a Georgia court about her role in the Jan. 6 Capitol riot. Kimmel — who was...
WASHINGTON, DC・28 DAYS AGO
The Independent

House Speaker Nancy Pelosi has hit back at a San Francisco archbishop who last week announced he would deny her Communion over her refusal to support aligning US law with Catholic doctrine when it comes to a woman’s right to end an unwanted pregnancy. Ms Pelosi, the second-highest ranking Catholic official in the US, suggested church officials who rail against Democratic politicians who don’t support laws banning abortion are using a double standard because they rarely speak out against leaders who support the death penalty despite the Catholic church’s longstanding opposition to capital punishment.“I wonder about the death penalty, which...
CONGRESS & COURTS・13 HOURS AGO
The Independent

Piers Morgan’s new show Uncensored aired on for the first time on TalkTV today (25 April), with a special introduction from comedian Ricky Gervais. In the surprise cameo ahead of the British broadcaster’s highly publicised Donald Trump interview, Gervais appeared briefly to wish Morgan “good luck” with his new series, which Morgan promises will “cancel cancel culture”.In the video Gervais said: “The producers of Piers Morgan’s new show contacted me and asked me if I’d like to be a guest. I said, ‘Definitely not.’”He added: “They said would you mind doing a quick video wishing him luck? I said,...
CELEBRITIES・29 DAYS AGO
The Independent

Why the hell can’t America end this deadly gun violence?

Sadness, of course. Who could not feel heartbroken when looking at the scenes from Robb Elementary School?Horror, obviously, that this could happen at a primary school in the middle of the day, the most vulnerable mown down in broad daylight, 90 miles west of San Antonio, with at least one of their teachers. Others are injured, who knows who badly.But then comes the exasperation, the weary helplessness, and – in truth – the sheer anger. How can this be happening once again in America?How can another community become irrevocably torn apart by such senseless violence, barely a week or so, after...
PUBLIC SAFETY・3 HOURS AGO
The Independent

President Joe Biden prepared to address the nation Tuesday night shortly after returning to the White House from a five-day trip to Asia that was bookended by “horrific” mass tragedy.Biden was on Air Force One Tuesday afternoon when officials said a gunman acting alone killed at least 14 students and a teacher at a Texas elementary school. His departure for Asia last week came just two days after he met with victims’ families after a hate-motivated shooter killed 10 Black people at a grocery store in Buffalo, New York. The back-to-back tragedies served as sobering reminders of the frequency...
TEXAS STATE・4 HOURS AGO