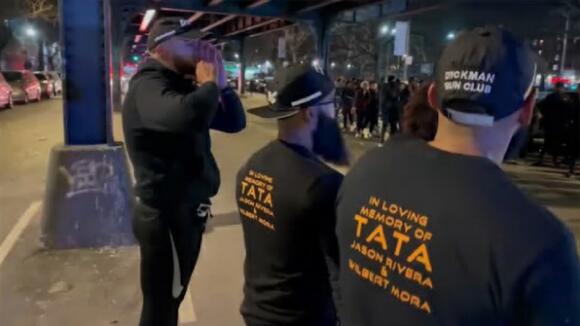 Mike Marza has more from the wake for Officer Jason Rivera at St. Patrick's Cathedral in NYC.

Officer Rivera emerged from the Heights with a need to serve, but before joining the Academy, he had to get in shape - so he joined the Dyckman Running Club community. "He believed in us, and he believed in himself - and that's what we're doing, we're honoring him, said one member. They called him 'Tata.' On Thursday, his running brothers and his brothers and sisters in blue ran two miles through the streets of Inwood - the streets that made him into the officer he became, if only for a little bit. The two miles brought the runners by Rivera's family home - candles marking the start of his life. They ran to the river and back to Fort Tryon Park, where they lit candles for 'Tata,' and his partner, Wilbert Mora. "These lights will go dim, but their lights will never go dim if we continue to make an impact in all the people we touch," said another member. RELATED | How to help families of fallen police officers

Police in Alabama say a South Carolina truck driver has confessed to killing a woman who disappeared 21 years ago and to hiding her body in a suitcase. Police in Bessemer, Alabama told news outlets that South Carolina native Brian Jones traveled back to Alabama last month and admitted to killing 41-year-old Janet Luxford in 2001. He then led investigators to a green suitcase with bones inside, police said.
BESSEMER, AL・26 DAYS AGO
Law & Crime

Jurors found a man guilty of all charges for murdering a woman he briefly dated. “I’m still alive,” Brandon Roberts, 29, yelled Tuesday as judicial marshals took him from that courtroom in Bridgeport, Connecticut, according to The Connecticut Post. He shot therapist Emily Todd, 25, in the back...
25 DAYS AGO
rolling out

A 14-year-old Black teen with autism was attacked by New York police officers while he was waiting for his siblings to finish checking out at a Target store on April 18. Video shows the Black teenage boy being tackled to the ground by deputies. His sister can be heard in the background yelling “Get off of my brother! What are you doing?”
LAW ENFORCEMENT・25 DAYS AGO
NBC News

A Florida woman has been arrested after allegedly making a bomb threat to her son’s high school, enraged that her son wasn't being fed enough at the cafeteria. Anaya Metoya Smith, 41, was arrested Wednesday in connection with a threatening voicemail she left at Cocoa High School on Feb. 3 around 5:30 p.m., saying she’d "blow ... up" the school, according to the probable cause affidavit. The city of Cocoa is about 45 miles east of Orlando.
ORLANDO, FL・26 DAYS AGO

The girl, an innocent bystander who was a half block away when the gunfire erupted, is identified as 11-year-old Kyhara Tay of the Bronx.
BRONX, NY・4 DAYS AGO
ABCNY

The shockwaves from the tragedy in Buffalo are being felt in New Jersey after the shooter's writings mentioned three towns by name, including two in Ocean County and one in Hudson County.
TOMS RIVER, NJ・4 DAYS AGO
OK! Magazine

The Santa Fe Sheriff doesn't believe Alec Baldwin is out of the woods just yet in regards to the ongoing investigation into Halyna Hutchins' death on the Rust film set. The late 42-year-old cinematographer was killed while on set of the Western film in October 2021 after the actor, 63, fired a prop gun that contained live rounds. While multiple individuals involved in the production of the film — including Baldwin, the film's assistant director David Halls, armorer Hannah Gutierrez-Reed and more — have been questioned about their apparent roles in the fatal mishap, the Santa Fe Sheriff's Department doesn't...
SANTA FE, NM・25 DAYS AGO
ABCNY

Four days after Suffolk Police said they do not believe Shannan Gilbert was part of the murders of sex workers committed by the Long Island Serial Killer at Gilgo Beach, Gilbert's sister tells Eyewitness News she still believes someone killed her sister.
SUFFOLK COUNTY, NY・4 DAYS AGO

Officials say flames broke out just after 10 p.m. Monday in the 2900 block of Brighton 5 Street.
BROOKLYN, NY・4 DAYS AGO