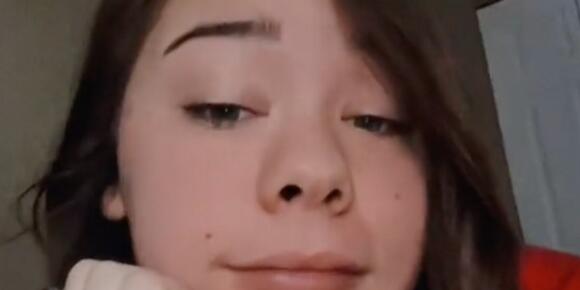 Instagram has been the cause of so many relationship problems for many.

Whether it's your significant other "liking" other women's photos on the social media app or they've slid into someone's DMs, Instagram has the potential to break up a couple.

TikTok user Jillian Stevens @jillianstevensss shared her reaction to seeing her boyfriend has liked a woman's photo, where she decided to make the picture his lock screen while he was asleep.

The result has left many on TikTok divided on whether it was a genius or petty move.

"Out here being the best gf and making his lock screen something that he likes😇😇😇," she captioned the video.

In the TikTok, the woman holds her boyfriend's phone and shows the screenshot of the other woman displayed. Stevens also lip-syncs to the viral sound from Taylor Swift's "I Bet You Think About Me," where she sings the lyrics “Oh my god, she’s insane."

In a pinned comment, Stevens clarified that the video was meant to be taken as a joke.

"THIS IS A JOKE BTW, we very much in love idc that he liked her pic i just am petty😇😇 all love," she wrote.

Still, people had mixed reactions to the video and Stevens' actions.

"Done this but with messages of him texting another girl. Took a screenshot and set as Lock Screen just to make sure he knew I knew," one person said.

Another wrote, "I should make a collage and do that."

“You’re giving me ideas,” one commented

"This is so unhealthy though.." one user argued.

"I'm reading im toxic and have to go through your phone bc im insecure. whoever your man is i hope he runs this is not normal behavior. get help girl," wrote another.

Click the upvote icon at the top of the page to help this story ride through the indy100 rankings and have your say in our news democracy.

1. She literally called herself petty for doing it- she's aware that it is. 2. you don't have to go through someone's phone to see that they liked a pic on Instagram, just follow them- ya know, like friends do? Seems like a healthy relationship if they can joke. lighten up people

If you have nothing to hide then no reason to worry about you significant other messing with your phone. Sounds to me like she really was just trying to be funny not petty.

This is a Major Red 🚩 Flag. Do Not I repeat Do Not marry this girl. You have been warned

Gwyneth Paltrow is a doting mom to two teenage children, Apple and Moses, who she shares with ex-husband Chris Martin. The family are notoriously private, but over the weekend the award-winning actress gave a rare insight into their upcoming plans - and how they are changing things up this year for Mother's Day.
FAMILY RELATIONSHIPS・21 DAYS AGO
Complex

Benzino is once again airing out some family business. After previously calling 50 Cent the “first hip-hop rat,” and getting into various other conflicts with his daughter Coi Leray, the rapper has now name-dropped both of them in a Twitter tirade. On Sunday, Fif took to Instagram to...
CELEBRITIES・21 DAYS AGO
The Independent

A woman has revealed several “red flags” that she found in the apartment of the man she’s dating, which included two books about pregnancy and a woman’s ring.In a recent video shared to TikTok, Devin, @discoveringdevin, filmed herself sitting on a bed and putting her thumb down, as the text reads: “Red flags in his apartment.”She then began by showing four Apple MacBooks, all placed on top of each other, on a desk. “Four laptops…what are you hiding?” Devin wrote in the text over the clip.Next, she documented what appeared to be a “girl’s ring” on a white shelf....
RELATIONSHIP ADVICE・21 DAYS AGO
hotnewhiphop.com

90 Day Fiancé: Before the 90 Days star Johnny Chao is showing off a new look on social media. The reality TV star rocked a fresh-faced look on the show. However, Chao debuted some new facial hair in his most recent post on Instagram. More specifically, he grew a beard and mustache.
TV & VIDEOS・20 DAYS AGO
Hello Magazine

Click here to read the full article. It seems like everyone was rooting for Renée Zellweger and Ant Anstead to get together, including an unexpected duo: the Property Brothers. Drew and Jonathan Scott recently revealed that they were the ones that ended up getting Zellweger and Anstead to meet, and subsequently fall in love. And their hard work ended up paying off! Back on April 14, 2022, the Scott brothers sat down with ExtraTV to talk about everything from Drew’s upcoming fatherhood to Jonathan loving GF Zooey Deschanel’s Vanity Fair gown. While we loved the entire interview, we’re losing it over...
CELEBRITIES・23 DAYS AGO
OK! Magazine

Donald Trump didn't hold back when asked his opinions on the royal family during a sit down for Piers Morgan Uncensored. While chatting with the titular host for an interview that airs on Monday, April 25, the former president took aim at Meghan Markle, insisting he hasn't been "a fan" of hers "from the beginning" because of how she treats Prince Harry."Poor Harry is being led around by his nose," he told Piers Morgan. "And I think he’s an embarrassment." Trump also believes that the parents-of-two's dynamic will eventually lead to irreparable marital strife. "I want to know what’s going...
RELATIONSHIPS・22 DAYS AGO

Laughter erupted in courtroom after Johnny Depp said he doesn’t watch his own movies and couldn’t recall the question he was asked. “I don’t watch them. I feel better not watching them. What was the question again?” Mr Depp said to laughter from the room. Johnny Depp trial – latest updates“Order in the court, or I will have you removed,” Judge Azcarate said. “Understood? Thank you.”The defamation trial between Mr Depp and Amber Heard began on Monday 11 April in Fairfax, Virginia following Mr Depp’s lawsuit against his ex-wife in March 2019. Mr Depp is arguing that she defamed him...
CELEBRITIES・21 DAYS AGO
Grazia

Gender reveals have firmly become part of the 21st-century parenting journey. While once you had simply to decide whether to wait until your due date to know the sex of your baby, now you have the option of whether to shower your nearest and dearest with pink or blue fireworks, balloons, confetti, or cake to announce the big boy or girl baby news.
FAMILY RELATIONSHIPS・26 DAYS AGO
Hello Magazine

Hoda Kotb took to social media to show her support for her co-star and close friend Jenna Bush Hager as she embarked on a brand new adventure. The Today host shared a snapshot of her co-host's book tour schedule, which took her around the country to talk about her latest release with sister Barbara P. Bush.
CELEBRITIES・22 DAYS AGO
Insider

According to Tina Brown's new book, "The Palace Papers," Prince William was aware of his status as future king from a young age.
CELEBRITIES・21 DAYS AGO

Netflix has canceled another one of its major shows, with this one getting the ax after only two seasons. Variety reports that hit sci-fi drama Raising Dion has been dropped by the streamer, following its recent season debut. The news seems to have been revealed by series star Sammi Haney, who shared the news with fans on Instagram. "Sad to say that Raising Dion is CANCELED [sic] Thank you for all of the amazing support we got from all of our wonderful fans!" Haney wrote, in part. "Season 2 was a success, equal to Season 1, even if just looking at how many people watched all of it and wanted a season 3!"
TV SERIES・20 DAYS AGO
The Independent

Johnny Depp was asked about a text in which he told Amber Heard to take “no meetings” and “no movies”.The actor took the stand again on Monday (25 April) as part of the defamation case opposing he and Ms Heard in Fairfax, Virginia. He has testified every day since Tuesday (19 April), except when court broke on Friday (22 April) and on the weekend. Mr Depp was first questioned by his own lawyer and has since been cross-examined by Ms Heard’s legal team.Ms Heard’s attorney first read a text from her to Depp, which read: “I’m at a coffee...
CELEBRITIES・22 DAYS AGO
Newsweek

She’s definitely embracing the Hawaii lifestyle, and now “NCIS: Hawai’i” star Vanessa Lachey is showing off her everyday surrounding to her Instagram followers. “Hawai’i = Home,” Vanessa Lachey declares in her latest social media post. The “NCIS: Hawai’i” star also shares a snapshot of her sitting in a breathtaking area in Hawaii.
HAWAII STATE・21 DAYS AGO
itechpost.com

Last month it was revealed that Sharon Osbourne would be returning to television, partnered with Piers Morgan on a new U.K. series named The Talk. This comes nearly a year after Osbourne was suspended and eventually exited the U.S. talk show The Talk after expressing her support for Morgan in an intense discussion over race with co-host Sheryl Underwood. Now, in a new interview with the U.K.'s Sunday Times, Osbourne reveals how cancel culture impacted her as she eventually parted ways with her longtime daytime talk series amidst public backlash.
CELEBRITIES・22 DAYS AGO
People