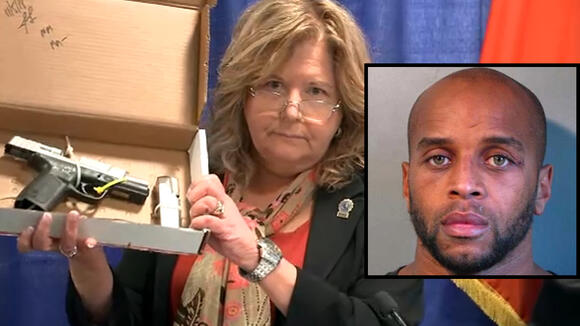 A man from Long Island was sentenced to 25 years to life in prison for opening fire on police officers in Nassau County. Duane Costa, 40, of Uniondale, was convicted of four counts of attempted murder in the first degree, one count of criminal use of a firearm in the first degree, and three counts of criminal possession of a weapon in the second degree. He was convicted on December 16 by Judge Patricia Harrington after opting for a bench trial. ALSO READ | Long Island police officer reunites with mom, baby he helped deliver

A mother and her new son reunited with a Suffolk County officer who helped deliver and save the baby born on Christmas Eve. Eyewitness News reporter Stacey Sager has the latest.

The incident happened just before 1 a.m. on October 28, 2018, after police say Costa ran away from a traffic stop. He was a passenger in a car that was pulled over for turning without signaling, and officers reported smelling alcohol, observing Costa not wearing a seatbelt and adjusting an object in his waistband. Officers ordered the driver and Costa out of the car, which is when they say Costa took off running. As he fled, he pulled out another gun and fired shots at the officers pursuing him. "Duane Costa fired at least two rounds directly at officers' heads from less than 10 feet away as they pursued him down the streets of Hempstead, and he continued firing as additional officers joined the chase," District Attorney Anne Donnelly said. "Police officers around the country put their lives on the line every day to keep our communities safe, knowing that it could mean they don't return home to their families. I will always support our police, and when there is violence against a member of law enforcement we will ensure that the defendant is held responsible for their crimes." The bullets narrowly missed officers as they pursued Costa, who was eventually taken into custody. ALSO READ | NJ tow truck driver hailed as a hero after saving driver from crash

No officers were hurt. Costa denied any wrongdoing before he was sentenced, and he referenced the recent fatal shooting of two NYPD officers in Harlem. "It's a shame," he said. "We're being shot at. We're being killed. The two officers that got killed, they're turning over in their graves right now. It's a lie just to get publicity." The Nassau County district attorney said it was a shame that he was allowed to invoke the officers' names in the courtroom. "He should not be speaking about police officers after trying to kill four of our police officers," district attorney Anne Donnelly said. Nassau County Police Commissioner Patrick Ryder agreed and said he doesn't want Costa to ever address or speak to his detectives who saved his life that day. ---------- * More Long Island news * Send us a news tip * Download the abc7NY app for breaking news alerts * Follow us on YouTube

Suffolk County police say the 16-year-old boy posted on Instagram that he was going to shoot up Bellport High School in Brookhaven.
SUFFOLK COUNTY, NY・1 DAY AGO
ABCNY

Police in Suffolk County are making an example of drivers who should not be on the road.
12 HOURS AGO
ABCNY

On Memorial Day Weekend, an intersection in Far Rockaway was disrupted by gunfire.
QUEENS, NY・8 HOURS AGO
ABCNY

Police: Suspect tells teen in traditional Jewish clothing he is 'going to get rid of all you Jews'

Police say the suspect told an 18-year-old man in traditional Jewish clothing that he is 'going to get rid of all you Jews.'
BROOKLYN, NY・14 HOURS AGO

Police shot the driver of a vehicle in Brooklyn early Saturday after an officer was struck by the car.
BROOKLYN, NY・13 HOURS AGO
ABCNY

Andrew Abdullah said nothing as he was formally charged with second-degree murder and weapons charges.
2 DAYS AGO
ABCNY

Bicyclist struck and killed by MTA bus in Laurelton, Queens

A bicyclist was struck and killed by an MTA bus Saturday in Queens.
QUEENS, NY・8 HOURS AGO
ABCNY

Police are investigating two fatal hit-and-run crashes on Long Island that happened not far from each other. Both happened in Suffolk County late Monday night.
SUFFOLK COUNTY, NY・3 DAYS AGO
ABCNY

It was a close call for one New Jersey family after a tree crashed down on a backyard tent.
PLAINFIELD, NJ・8 HOURS AGO
ABCNY

Police say they found a 22-year-old man with a gunshot wound to his stomach on Clarkson Avenue just before 7 p.m. and a dead man in an apartment up above on the second floor.
2 DAYS AGO
ABCNY

A 1-year-old girl was killed and her mother injured when they were struck by a car while crossing a Staten Island street Thursday morning.
STATEN ISLAND, NY・1 DAY AGO

The 90-year-old woman was walking on West 64th Street when a man approached her and took her purse from her walker.
UPPER WEST SIDE, NY・2 DAYS AGO
ABCNY

Two NYPD officers were reunited with a blind man they pulled to safety after he stumbled off a subway platform in Brooklyn last week.
BROOKLYN, NY・2 DAYS AGO
ABCNY

A 19-year-old man is in the hospital after being attacked by another man with a hatchet.
MANHATTAN, NY・4 DAYS AGO
ABCNY

Omar Bojang, the 18-year-old who was allegedly driving the scooter from which a gunman killed 11-year-old Kyahara Tay, surrendered Monday.
BRONX, NY・5 DAYS AGO
ABCNY

A summit was held in Mount Eden on Friday to discuss how New York City deals with cases of missing women and girls of color.
BRONX, NY・1 DAY AGO
ABCNY

Animal Control rescued 16 German shepherds and three Dobermans from what officials called the dilapidated basement of a once shining mansion in New Jersey Tuesday.
PATERSON, NJ・2 DAYS AGO
ABCNY

A 20-year-old was shot in face and killed after meeting with alleged motorcycle sellers under the Deegan Expressway.
5 DAYS AGO
ABCNY

The workers and owners of three stores on Long Island were arrested Tuesday, accused of illegally selling THC.
NASSAU COUNTY, NY・4 DAYS AGO