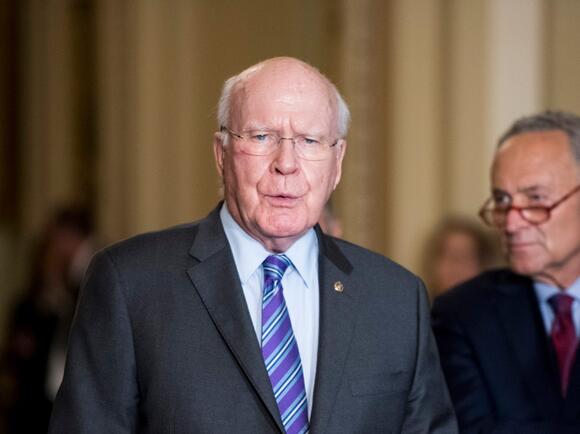 "Mitch McConnell has declared these things have to be done very quickly, as we saw during the last nominee," Leahy, the longest-serving senator, told CNN . "I think it's going to be awfully difficult for the Republicans, after setting that precedent, to stretch things out."

Justice Stephen Breyer is expected to soon announce that he will retire at the end of the court's current term, opening up a seat for Biden. Senate Majority Leader Chuck Schumer said on Wednesday that the chamber will move with "all deliberate speed" once a nominee is named. DC Circuit Court Judge Ketanji Brown Jackson is viewed as the presumptive favorite, but others like California Supreme Court Justice Leondra Kruger and South Carolina federal judge J. Michelle Childs are also in the running. The White House has confirmed Biden will follow his campaign promise and name a Black woman to replace Breyer.

Sen. Dick Durbin, the chairman of Senate Judiciary Committee, the panel that oversees Supreme Court nominations, told reporters that "it's little early to predict a timetable" for Biden's nomination. As chairman, Durbin would be the one to formally schedule the hearing.

"We're in the process," Durbin told reporters on Thursday, per CNN's Manu Raju , about what White House chief of staff Ron Klain told him when asked if the president had a name already.

Leahy, who is also a former chairman of the Judiciary Committee, is correct in pointing out that McConnell and Republicans worked quickly to confirm Barrett.

There were only 27 days from the announcement of Barrett's nomination to her confirmation, one of the quickest timelines in recent memory . The shortest confirmation on record remains Justice John Paul Stevens who was confirmed in just 19 days in 1975, a nod to an era when Supreme Court confirmations didn't spawn the heady political battles that often follow nowadays.

Sen. Susan Collins, who has previously supported some of Biden's possible selections, said on Wednesday after the news broke of Breyer's possible retirement that she would like to see a slower confirmation than what Barrett received. Collins opposed Barrett's nomination saying at the time that the winner of the 2020 presidential election should have had the right to fill Justice Ruth Bader Ginsburg's seat.

"As you know, I felt that the timetable for the last nominee was too compressed. This time there is no need for any rush. We can take our time. Have hearings, go through the process, which is a very important one. It is a lifetime appointment, after all," Collins told reporters in Maine.

McConnell and Senate Republicans ended the Senate filibuster for Supreme Court nominees to confirm Justice Neil Gorsuch, meaning that a new justice could be confirmed on a strictly party-line vote. A 50-50 Senate, which currently exists, has never dealt with a Supreme Court nomination before.

"As to his replacement: If all Democrats hang together – which I expect they will – they have the power to replace Justice Breyer in 2022 without one Republican vote in support," Sen. Lindsey Graham, a former Judiciary Committee Chairman himself, said in a statement on Wednesday . "Elections have consequences, and that is most evident when it comes to fulfilling vacancies on the Supreme Court."

Some have speculated that even without the filibuster, Republicans could still try to gum up the works. An unnamed Senate aide told The Washington Post that the GOP could try to force delays in committee hearings or meetings. McConnell, for his part, led the GOP's unprecedented decision to hold a Supreme Court vacancy for months, refusing to allow Judge Merrick Garland, then-President Barack Obama's nominee, to even receive a confirmation hearing.

pick the most qualified candidate... no preference to anyone because of ethnic background or what's in their pants ... not to say there is any history of that...

Members of Congress are generally limited in earning outside income. But there's a major exception.
CONGRESS & COURTS・2 DAYS AGO
WashingtonExaminer

In West Virginia, people would see an average premium hike of $1,536 per person if ACA subsidies aren't extended, according to a Families USA report.
CONGRESS & COURTS・2 DAYS AGO

In the latest set of text messages between the Fox News host and Trump's former chief of staff, Meadows told Hannity to "Stress every vote matters."
PRESIDENTIAL ELECTION・23 DAYS AGO
Business Insider

Once a moderate Republican, Elise Stefanik is now at the center of the anger over the Buffalo shooting

Stefanik, the No. 3 House Republican, lashed out at Democrats and accused the party of using illegal immigration to eventually register more voters.
BUFFALO, NY・2 DAYS AGO
Business Insider

A legal effort to ban Marjorie Taylor Greene from standing for re-election has been given the go-ahead by a federal judge, who denied the far-right Georgia congresswoman’s attempt to have the case against her thrown out – paving the way for further proceedings by the end of this week.The news led Ms Taylor Greene to complain that “I have to go to court on Friday and actually be questioned about something I’ve never been charged with and something I was completely against.”Ms Greene, a hardline pro-Trump Republican who has long circulated false conspiracy theories, is accused by campaigners of...
CONGRESS & COURTS・29 DAYS AGO
Business Insider

"We're in a much different part in the world right now with the turmoil that we have," he told Insider. It's a new obstacle for Biden's spending plan.
FOREIGN POLICY・1 DAY AGO
Fox News

The intelligence the U.S. shared with Ukraine helped it continue to resist Russian invading forces and even shoot down a transport plane carrying hundreds of Russian troops, a new report revealed. According to current and former U.S. officials who spoke with NBC News on Tuesday, the U.S. provided critical intelligence...
MILITARY・22 DAYS AGO
Salon

A federal judge cleared the legal path for Georgia voters to stop Greene from being able to run for re-election. The Georgia rep was stripped of her committee assignments over racist comments she made online.
GEORGIA STATE・29 DAYS AGO

Individual judges may not like the policy choices of the Biden administration, but it is not their job to weigh in on that policy debate.
TEXAS STATE・23 DAYS AGO
Newsweek

International order will be thrown out the window if Russia is able to escape consequences over its invasion of Ukraine, US Gen. Mark Milley told CNN.
POLITICS・22 DAYS AGO
Business Insider

Harvard polled Americans under 30 who are likely to vote in the midterms and found 85% of them want some government action on student loan debt.
PRESIDENTIAL ELECTION・23 DAYS AGO