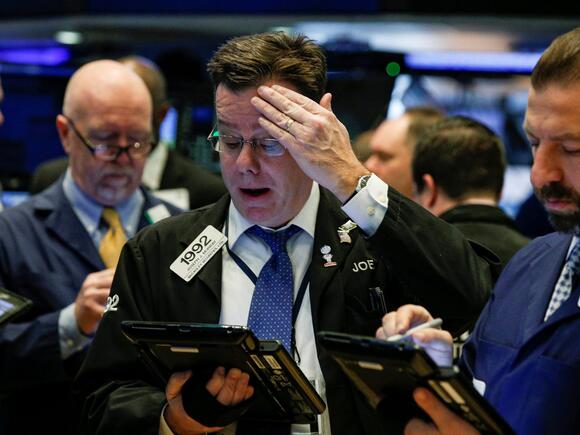 Stocks must slide another 20% before the Federal Reserve takes action, according to an investment chief at the world's largest hedge fund.

Greg Jensen, co-chief investment officer at Bridgewater Associates, told Bloomberg News that the Fed won't come to the market's rescue — in what's known as a Fed put — until the market drops another 15% to 20%. Even if that happens, he said it would depend on how quickly the bottom falls out from the market.

Jensen said a decline in asset prices likely isn't a bad thing from the Fed's view, considering inflation is at its highest in 40 years.

"At these levels, it would take a much bigger move to get the 'Fed put' into the money," Jensen told Bloomberg. "They're a long way from that."

Bridgewater, the firm founded by billionaire investor Ray Dalio , has $150 billion in assets under management. Jensen told Bloomberg he thinks the Fed just wants the market to reset, not to crash. Excess liquidity has caused elevated asset prices, and with the Fed tightening its monetary policy, not enough buyers can make up for the difference, he added.

Investors were initially spooked by the potential for lower liquidity after Wednesday's Fed meeting when Chairman Jerome Powell said there's plenty of room to raise rates and declined to rule out rate hikes at every meeting this year.

Analysts told Insider the Fed's moves are a sign of change coming to the economy. Jensen also reflected the sentiment in his interview with Bloomberg: "We're at a turning point now, and things will be much different."

Controlled economic collapse coming. You’ve been warned. If you’re smart you pause, think on that, and then do what makes sense for you. We’ve done this many times before.

It’s sinking because all these loans that the hedges use to short the stocks back and forth will be drying up very very soon. So yeah the loan fueled pump is about to deflate

At best the stock market is legalized gambling....never risk more than you can afford to lose regardless of your age.

Dow plummets more than 1,100 points as US stocks crater on growing fears of a recession following weak results from retail giants

Lowe's also saw an earnings-related decline on Wednesday, and Home Depot sold off considerably despite it beating earnings estimates on Tuesday.
STOCKS・4 DAYS AGO
Markets Insider

Elon Musk says the US is probably in a recession that could last 18 months, adding that 'recessions are not necessarily a bad thing'

The world's richest man made the comment at a Miami tech conference. He joked that an "economic enema" would eventually need to "clear out the pipes."
BUSINESS・5 DAYS AGO
Markets Insider

Jeremy Grantham warns stocks will plummet, predicts a near-term recession, and sounds the alarm on a superbubble in a new interview. Here are the 9 best quotes.

Jeremy Grantham predicts US stocks will plunge and the economy will tumble into recession. The GMO cofounder warns the surge in a wide range of assets could be dangerous. Grantham anticipates stubborn inflation, and expects the Fed to struggle to curb price increases.
STOCKS・3 DAYS AGO
Markets Insider

Ackman tweeted his disapproval of Terra, suggesting that the crypto industry should "self-regulate" projects with "no underlying business models."
STOCKS・4 DAYS AGO

US stocks jumped Tuesday, with the Dow gaining more than 400 points. Federal Reserve Chairman Jerome Powell said he would support rate hikes until inflation is tamed. Meanwhile, the US is expected to block Russian bond payments and let a key sanction waiver expire May 25, per Bloomberg.
STOCKS・5 DAYS AGO
dailyhodl.com

Silk Road founder Ross Ulbricht is forfeiting billions of dollars worth of Bitcoin (BTC) and other crypto assets to the US government. According to a new court filing, Ulbricht will relinquish any claim to over 69,000 BTC and undisclosed amounts of Bitcoin Gold (BTG), Bitcoin SV (BSV) and Bitcoin Cash (BCH) worth a combined $3 billion as part of a settlement.
PUBLIC SAFETY・27 DAYS AGO
Business Insider

The world's richest family, which owns a chunk of Walmart, lost $19 billion as the retailer's stock went down, Bloomberg reported Tuesday.
BUSINESS・5 DAYS AGO
Markets Insider

A member of a superyacht crew also told The Times of London that one owner had his bar stools made from whale foreskin.
BOATS & WATERCRAFTS・28 DAYS AGO
The US Sun

MILLIONS of Americans are set to receive Social Security checks worth up to $1,657 tomorrow. The cash boost will come just 48 hours before Supplemental Security Income payments, worth up to $841, are set to land in around eight million bank accounts on April 29. Seniors with birthdays on the...
BUSINESS・26 DAYS AGO

Dow plunges 1,100 points after Target earnings implosion adds to risk of a recession

While Target said a mix of poor-selling inventory and higher input costs weighed on profitability, it believes the consumer is still strong.
STOCKS・4 DAYS AGO
Markets Insider

Economist Stephen Roach says the US is headed for stagflation, and warns markets aren't accounting for massive Fed tightening

Economist Stephen Roach explained why stagflation is his base case for the US in a CNBC interview. Markets aren't prepared for the massive tightening the Fed needs to do to tame inflation, he said Thursday. "50 basis points doesn't cut it," he said, arguing the Fed will have to be...
BUSINESS・2 DAYS AGO
Markets Insider

"If you're running a significant enterprise, you have to be looking through a lens with a little bit more caution right now," David Solomon told CNBC.
BUSINESS・4 DAYS AGO
Markets Insider

It's likely that Changpeng Zhao meant it as a joke, as he remains a billionaire — but luna's meltdown has stung investors worldwide.
STOCKS・3 DAYS AGO
Markets Insider

A spike in the cost of insurance on Russian debt implied a 90% probability Wednesday the Kremlin will miss bond payments within a year.
MARKETS・4 DAYS AGO
Markets Insider

The dollar and euro are on the verge of parity for the first time in 20 years — and it could happen within a month. Here's what to know.

"[Parity] is an indicator of lack of faith in the euro area economy going forward, which is not surprising," an economist told Insider.
CURRENCIES・5 DAYS AGO