Police warning about rash of armed robberies at fast-food restaurants: 'They appear organized' 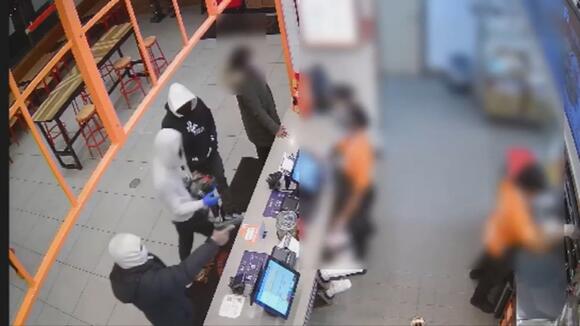 Philadelphia police believe a group of young males is responsible for a crime spree targeting fast-food restaurants in the city. Authorities say the five suspects appear to be between 16 and 20 years old. "In many of these robberies, in fact, all of them, they are done like a takeover," said Philadelphia Police Chief Inspector Frank Vanore. "One or two of the individuals either jump the counter or find a way to get back behind the counter. They order the employees, and they move quickly to where the money is kept, whether it's the safe, different registers." Investigators say at least five robberies are believed to be linked to the group. Surveillance video released by police shows the first incident which took place just before 5:50 p.m. on Jan. 16 at the Popeyes on the 2700 block of West Hunting Park Avenue.

Police say there is a clear pattern to these armed robberies and they believe teenagers are responsible.

Police say the first suspect was ordering food when a second suspect pointed a handgun at the clerk. The video shows the third suspect jumping over the counter. Police say the fourth and fifth suspects, armed with guns, went into the kitchen where they ordered the employees to the front of the store. The suspects stole money and then fled on foot. 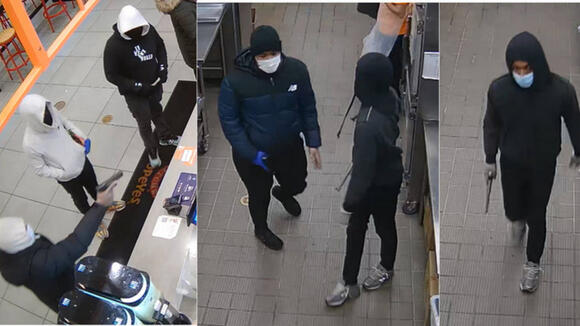 The second robbery occurred around 9 p.m. on Jan. 19 at the Burger King located at 4700 N. Broad Street. Police say after the group of four placed their order, two of the suspects pulled out guns and pointed them at the employees. One suspect then jumped over the counter while the three others went behind the counter through a side door. Police say the suspects took money from the registers then went into the kitchen and ordered the manager to open the safe. The suspects fled in a silver Nissan Rogue with a dent on the hood and a missing Nissan emblem.

The third robbery happened around 8:10 p.m. on Jan. 21 at the McDonald's on W. Allegheny Avenue. Police say four suspects, armed with handguns, forced the manager to empty the safe and cash registers. The suspects fled in a similar Nissan Rogue. 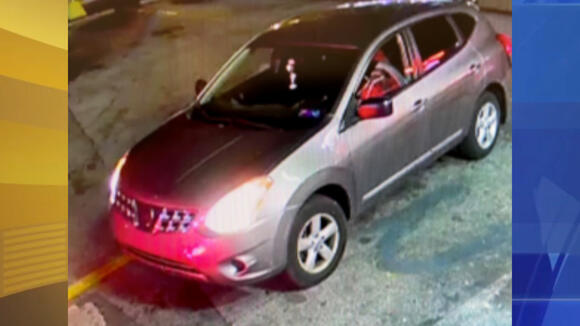 Philadelphia police say a group of robbers who are targeting fast-food restaurants may be traveling in this SUV.

The fourth incident occurred just before 7:45 p.m. on Jan. 24 at the McDonald's located at 120 E. Oregon Avenue. Police say two suspects went behind the counter and demanded money from the registers and safe, as two others stood by the exit to prevent anyone from entering or leaving the restaurant. All four males fled the scene and entered a Honda Pilot. The fifth robbery took place just after 9 p.m. on Jan. 25 at the Burger King on the 1500 block of S. Columbus Boulevard. Police say the four suspects entered the restaurant through a side service door. They forced the manager to open the safe and registers. Each suspect went to a different register, police say. After stealing money, police say they exited the restaurant and entered a black vehicle, possibly a Honda Pilot. "There's a driver that usually remains in the vehicle, and in most of these cases, four of the individuals perpetrate the robbery. They appear organized. They are standing by the door. They have individuals that jump the counter. It concerns us, it concerns us because of the level of violence lately," said Vanore. Police are still not sure if a sixth case at a Burger King in the 700 block of Lehigh Avenue is connected to the same group. Anyone with information should call Northwest Detective Division at 215-686-3353/3354.

"They appear organized. They are standing by the door. They have individuals that jump the counter. It concerns us," said Philadelphia police.

During the altercation, the victim was punched, sprayed in the face with mace, and had her phone stolen, SEPTA said.
PHILADELPHIA, PA・4 HOURS AGO
6abc Action News

Officials announce the arrest of a man after allegedly firing a gunshot at police officers in Norristown, Montgomery County.
NORRISTOWN, PA・20 HOURS AGO
6abc Action News

Four men were stabbed inside a park in the city's Tioga-Nicetown neighborhood, according to police.
PHILADELPHIA, PA・1 HOUR AGO

Police in Chester are looking for Jabril Ali, who is wanted in the attempted murder of a tow truck driver who was ambushed while on the job.
CHESTER, PA・2 DAYS AGO
6abc Action News

A young man's mission to get his girlfriend home safely was cut short when gunfire rang out in a West Philadelphia neighborhood.
PHILADELPHIA, PA・1 DAY AGO
6abc Action News

SEPTA police are asking for the public's help in identifying a suspect wanted for indecent assault inside a Center City Philadelphia station.
PHILADELPHIA, PA・2 DAYS AGO

Police say she had been riding northbound in the southbound lane of State Road with dirt bikes and other quads.
PHILADELPHIA, PA・2 DAYS AGO
6abc Action News

Police have released new surveillance video of a suspect wanted in a shooting that seriously injured a pregnant woman in West Philadelphia.
PHILADELPHIA, PA・3 DAYS AGO

Police say the call came in around 4:14 p.m. for an "erratic driver" traveling over the Route 109 Bridge heading toward Cape May.
CAPE MAY, NJ・3 DAYS AGO
6abc Action News

Gun Violence Solutions: Who are the victims?

Not all Philadelphians deal with gun violence on a daily basis.
PHILADELPHIA, PA・2 DAYS AGO
6abc Action News

Police say the boy was rushed to an area hospital with leg and head injuries.
PHILADELPHIA, PA・3 DAYS AGO
6abc Action News

A SEPTA police officer is recovering after being assaulted Thursday morning at an El station stop in West Philadelphia.
PHILADELPHIA, PA・3 DAYS AGO