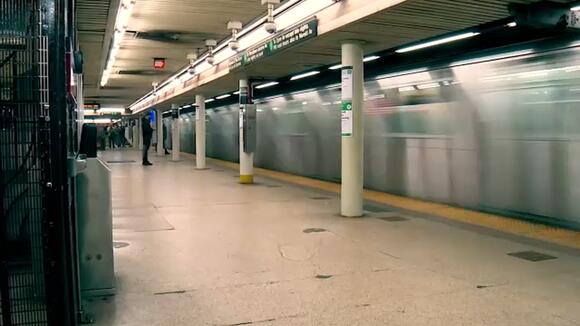 The Manhattan borough president and other local lawmakers are calling on the MTA to begin a pilot program testing platform barriers at subway stations. The goal is to target stations where there have been high levels of platform-related incidents. It comes as we see new video of the suspect police say shoved a 62-year-old man on the tracks at the Fulton Street station on Sunday morning. The victim was able to hide under the platform, but was still hit by part of the train and suffered a cut to his leg. In Brooklyn, police are searching for the suspect behind a violent attack in a subway station. He's accused of attacking a 48-year-old man on January 12 at 8:30 p.m. at the Kings Highway station. The victim suffered a fractured shoulder, wrist, and elbow, along with a concussion. ALSO READ | Long Island police officer reunites with mom, baby he helped deliver

A mother and her new son reunited with a Suffolk County officer who helped deliver and save the baby born on Christmas Eve. Eyewitness News reporter Stacey Sager has the latest.

yeah waste more money, you know what the real problem is deal with it, get these people of the train, and into a hospital. where are the social worker's and mental health care workers who are supposed the be helping?

I got a better idea,why don't we just use a harness,you could attach to a beam while waiting for train ? this snide remark was aimed at the M.T.A. not passengers .

Esperanza Rodriguez was selling fruit in the middle of Flushing Meadows Corona Park when she said her attacker came out of nowhere, knocked her down, ripped her fanny pack off and stole $200 of her hard-earned cash.
QUEENS, NY・10 HOURS AGO
ABCNY

An on-duty EMT was released from the hospital after being shot in his shoulder while treating an allegedly drunk and disorderly patient inside his ambulance on Staten Island Wednesday night.
STATEN ISLAND, NY・15 HOURS AGO
ABCNY

The arrests were part of Operation Long Island Wave, and those arrested were wanted for offenses including homicide, attempted murder, narcotics, weapons offenses, robbery and assault.
LAW ENFORCEMENT・16 HOURS AGO
ABCNY

Transport Workers Union Local 100 officials said bus operators are tired of being treated like punching bags, and they detailed the changes they want during the event outside the Kingsbridge Bus Depot in Inwood.
NEW YORK CITY, NY・1 DAY AGO

Two people were found dead in a burning car in the Bronx were both fatally shot, and a double murder investigation is now underway.
BRONX, NY・1 DAY AGO
ABCNY

Fire ripped through the same buildings back on October 8, 2021. One firefighter sustained minor injuries battling this morning's inferno.
BRONX, NY・1 DAY AGO
ABCNY

The BMW was southbound when the driver lost control and careened into the northbound lanes just after 11:45 p.m. Wednesday.
BRONX, NY・16 HOURS AGO

Mayor Eric Adams has said it makes no sense for the cameras to have limited hours when a majority of crashes happen late at night and early in the morning.
NEW YORK CITY, NY・1 HOUR AGO
ABCNY

While still not at pre-pandemic levels, subway ridership continues to set new high watermarks in the push to return to normalcy.
NEW YORK CITY, NY・14 HOURS AGO
ABCNY

Detectives have identified a 14-year-old person of interest they are looking to question in the fatal shooting of 11-year-old Kyahara Tay.
BRONX, NY・16 HOURS AGO
ABCNY

A community is rallying and demanding justice after an innocent 11-year-old girl was gunned down in the Bronx, struck by a stray bullet from a gunman on a scooter.
BRONX, NY・1 DAY AGO

A man has been arrested and charged for the brutal murder of a 60-year-old pawn shop owner in Queens.
QUEENS, NY・1 DAY AGO
ABCNY

Graphic video shows three suspects attacking two men, lifting one up and slamming him onto the ground.
MANHATTAN, NY・2 DAYS AGO
ABCNY

Authorities say a suspect in a stolen Honda CRV struck an occupied police vehicle that was pulled over on the side of the road before colliding with another vehicle and hitting several pedestrians.
PATERSON, NJ・19 HOURS AGO
ABCNY

For the second time this year, a Rockland County community has had to take action after a racist incident during a school sporting event.
PEARL RIVER, NY・14 HOURS AGO
ABCNY

COVID isn't over. One example is the fact that some 20 New York City judges are now COVID positive after they attended a retreat in Montauk last weekend, according to published reports.
NEW YORK CITY, NY・15 HOURS AGO
ABCNY

New York City is preparing to honor the late rapper Christopher Wallace, better known as Biggie Smalls and the Notorious B.I.G., who would have turned 50 on May 21.
BROOKLYN, NY・1 DAY AGO