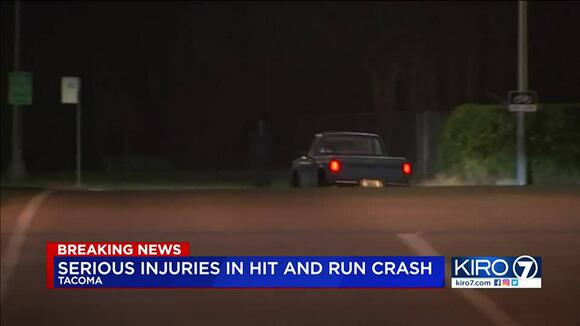 TACOMA, Wash. — Police are searching for a driver who struck and seriously injured a woman Wednesday night in Tacoma.

A KIRO 7 photographer was at the scene, located on East D Street, and witnessed the driver of a blue truck flee the scene of the collision.

The woman injured in the collision was part of a group protesting a camping ban outside the LeMay car museum.

The victim was taken to the hospital.

Other protesters at the scene told KIRO 7 they believe the hit-and-run might have been intentional.

“I don’t know if it was intentional on the driver’s part, but there is no doubt in my mind it was intentional to hit them and then drive off. There are no skid marks, there were no brake lights. They were not swerving before or after they drove up onto the sidewalk and hit a pedestrian,” said Stacey Soltoff, who witnessed the incident.

Police are at the scene investigating.

Suspect in Wallingford standoff ran inside home, locked out homeowners

The homeowners had stepped outside when a man who was having a mental health crisis ran into their home and barricaded himself inside.
SEATTLE, WA・11 HOURS AGO
KIRO 7 Seattle

BNSF will investigate the collision, while SPD investigates possible criminal aspects of the incident.
SEATTLE, WA・3 HOURS AGO
KIRO 7 Seattle

The King County Sheriff’s Office said there are believed to be three suspects.
WHITE CENTER, WA・15 HOURS AGO
KIRO 7 Seattle

The shooting victim was found inside a backyard shed.
GRAHAM, WA・11 HOURS AGO
KIRO 7 Seattle

Mohamadou Kabba was shot in Renton on January 12, one of three victims in a shooting spree that prosecutors described as “seemingly at random.”
RENTON, WA・4 HOURS AGO
KIRO 7 Seattle

Arrest made in murder of 66-year-old Tacoma woman

Tacoma police are investigating a homicide after a woman was found dead.
TACOMA, WA・1 DAY AGO
KIRO 7 Seattle

The 35-year-old suspect was booked into the King County Jail for investigation of drive-by shooting and unlawful possession of a firearm.
SEATTLE, WA・1 DAY AGO
KIRO 7 Seattle

Detectives also believe the four suspects are involved with other robberies and thefts of Kia and Hyundai vehicles.
TACOMA, WA・1 DAY AGO
KIRO 7 Seattle

Wyatt was shot in the head Jan. 15 while he was driving near North 43rd Street and North Pearl Street. He died days later from his injuries.
TACOMA, WA・1 HOUR AGO
KIRO 7 Seattle

SPD will request criminal charges be filed in the case.
SEATTLE, WA・1 DAY AGO
KIRO 7 Seattle

No suspect has been identified.
KENT, WA・1 DAY AGO
KIRO 7 Seattle

When a fire broke out at a doggie daycare in Seattle’s Lake City neighborhood on Wednesday, workers scrambled to get 115 dogs out of the building.
SEATTLE, WA・1 DAY AGO
KIRO 7 Seattle

Renton police dog K9 Odin will be retiring after 8 years of distinguished service, said the Renton Police Department. On Jan. 16, Odin completed his last day of service. “We want to thank him and his handlers, Officer Lane and Officer Moynihan for their outstanding service during their tenure working with K9 Odin,” the Renton Police Department said. Officer Lane was with Odin for two years and Officer Moynihan for six years.
RENTON, WA・6 HOURS AGO
KIRO 7 Seattle

34-year-old Christopher Martin, initially charged with first-degree assault and robbery, is now facing first-degree murder and robbery charges. His attorney pleaded not guilty on his behalf. Seattle Police say on Jan. 13 Martin hit a man in the head with a hammer and stole his backpack. The attack happened on Fourth Avenue and Pike Street and was caught on camera by a metro bus.
SEATTLE, WA・9 HOURS AGO
KIRO 7 Seattle

Seattle Police arrested a man on Jan. 9 for a traffic violation and then again on Jan. 31 for carrying drugs and stolen guns. “It was déjà vu all over again this week,” the report said. On Jan. 9, in downtown Seattle, police conducted a routine traffic stop. They stopped the driver and asked for his license, which he couldn’t provide. The 31-year-old man was taken into custody for driving without a license. When officers searched him, they found $1,536 in cash in his pants. As police were searching his car, they found what appeared to be a large bag of marijuana and a scale. Police seized the vehicle and got a search warrant.
SEATTLE, WA・2 DAYS AGO
KIRO 7 Seattle

SR 507 is blocked in both directions while troopers investigate.
ROY, WA・1 DAY AGO
KIRO 7 Seattle

A mangled cat was brought to the Tacoma & Pierce County Humane Society, on Jan. 27, after likely being hit by a car. The 2-year-old cat, now named Bombur, was found limping and barely able to breathe, said the shelter. After arriving, the shelter’s veterinarian found severe injuries. Bombur has a fractured pelvis, dislocated right back leg, and a tear in his abdomen. His internal organs now crowd his lungs and heart, causing shortness of breath.
TACOMA, WA・7 HOURS AGO
KIRO 7 Seattle

Southbound I-5 Express Lanes in Seattle reopen after crash

As many as five vehicles may have been involved in the crash.
SEATTLE, WA・1 DAY AGO