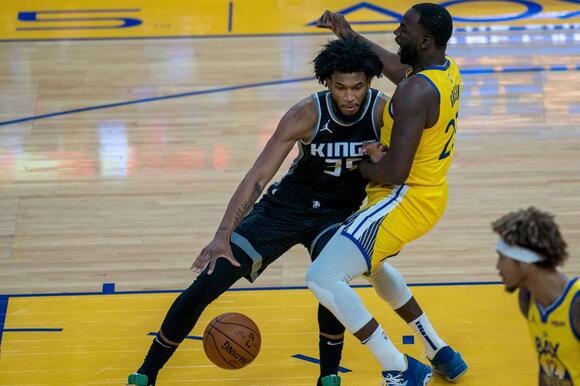 The Golden State Warriors currently find themselves with the second-best record in the NBA at 35-13 . They are legitimate championship contenders with Klay Thompson back at full health.

So, why would Golden State even think about making a deal ahead of the NBA trade deadline? There’s a couple reasons why. First off, injuries have plagued this team to an extent. Both Draymond Green and James Wiseman are sidelined. There’s also some concern about frontcourt depth behind the aforementioned Green and Kevon Looney.

Below, we look at three trades the Warriors should look to make before the February 10 NBA trade deadline.

There’s no telling when James Wiseman will return to the court for Golden State. The former No. 2 pick has missed the entire 2021-22 season thus far with a knee injury. This leaves the Warriors incredibly short in the frontcourt. That’s magnified with Draymond Green also sidelined to injury . Adding the underrated Muscala to go with Kevon Looney would be a nice under-the-radar move. It would also stretch the court given Muscala’s ability to shoot the three.

Oklahoma City finds itself in complete rebuild mode. It is attempting to acquire as many draft pick assets as possible to help expedite said rebuild. Picking up a second-round pick for a 30-year-old center who doesn’t fit into the team’s long-term plans makes sense. OKC also picks up the underrated Toscano-Anderson (5.2 PPG, 53% shooting in three NBA seasons). An expanded role would do the Oakland native well.

Related: Where do the Golden State Warriors stand in Sportsnaut’s NBA power rankings?

Depth? Why? The Warriors go about 13 deep. What would it accomplish by adding more rotational pieces to a roster that’s having a hard time giving minutes to talented players? Well, it’s rather simple. Most of the Warriors’ depth is out on the wing with Andrew Wiggins, Otto Porter Jr., Andre Iguodala and Jonathan Kuminga. The team could use more depth in the backcourt. Both McLemore and Smith Jr. (combined 15.1 PPG, 3.6 RPG, 4.2 APG) would provide that.

Now, why would the Blazers help out a conference rival? This is also rather simple. Acquiring two future second-round picks for veterans who don’t fit into the team’s long-term plans makes sense. As for Toscano-Anderson, he’d be a major upgrade out on the wing on defense.

Publicly, the Warriors’ brass decries rumors that Wiseman could be had in a trade. There’s no telling whether that’s to up his value ahead of the NBA trade deadline. What we do know is that Wiseman has played all of 39 games since Golden State made him the No. 2 pick in the 2020 NBA Draft. It’s looking very much like that was a bust of a pick with LaMelo Ball going No. 3.

Either way, the 25-year-old Kevon Looney is having the best season of his career. He’s averaging 6.1 points and 7.3 rebounds on 55% shooting from the field. Golden State doesn’t necessarily need a dynamic center with Stephen Curry, Klay Thompson and Andre Wiggins doing their thing out on the perimeter. However, the Dubs could use a traditional backup power forward to the injured Draymond Green. Bagley III would round out the rotation in a big way.

As for the Kings, it’s known that they are looking to move th 22-year-old Bagley . Why not attempt to get a potential franchise cornerstone inside to go with guards De’Aaron Fox and Tyrese Haliburton? By yielding a protected first-round pick in 2023, Sacramento does just that. If healthy, Wiseman could end up being an All-Star caliber player.

Los Angeles Lakers superstar and multi-time NBA champion Lebron James reportedly has a favorite among the crop of finalists for
LOS ANGELES, CA・21 HOURS AGO
Sportsnaut

For the third time this postseason, the Dallas Mavericks’ organization faces a fine for how it has handled itself on
DALLAS, TX・6 HOURS AGO
Sportsnaut

The Los Angeles Lakers entered the 2021-’22 season with expectations and ended it without even earning a spot in the
LOS ANGELES, CA・1 DAY AGO
Sportsnaut

Miami Heat steal one from Boston Celtics: 4 takeaways from Game 3

The Boston Celtics chose to leave their fans out to dry at the TD Garden heading into a tied series
BOSTON, MA・20 HOURS AGO
Sportsnaut

Even when it appeared the Dallas Mavericks had control of Game 2, the Golden State Warriors showed they were battle-tested,
SAN FRANCISCO, CA・1 DAY AGO
Sportsnaut

Even without Jimmy Butler (knee) in the mix for the second half, the Miami Heat were able to take out
MIAMI, FL・2 HOURS AGO

The NBA fined the Dallas Mavericks $100,000 on Sunday for continuing to violate league rules on bench decorum. The latest
DALLAS, TX・6 HOURS AGO
Sportsnaut

Our MLB Games Today schedule is back for the 2022 MLB season. Major League Baseball ended its lockout, officially clearing
MLS・13 HOURS AGO

Down 2-0 in the Western Conference finals, the Dallas Mavericks have an aggressive game plan for Game 3 at home
SAN FRANCISCO, CA・1 DAY AGO
Sportsnaut

The 2022 Oklahoma City Thunder draft will include two lottery selections, another first-round pick and a selection in Round 2.
OKLAHOMA CITY, OK・2 HOURS AGO
Sportsnaut

Jayson Tatum had a pain the neck after Game 3 instead of being one to the Miami Heat. After a
MIAMI, FL・4 HOURS AGO
Sportsnaut

It seems the Portland Trailblazer may target not one, but two of the Charlotte Hornets’ unrestricted free agents this offseason.
PORTLAND, OR・2 DAYS AGO
Sportsnaut

One of the fastest risers in the college basketball business isn’t going anywhere any time soon. It’s being noted that
LOS ANGELES, CA・5 HOURS AGO
Sportsnaut

The Utah Jazz are primed to make a change this offseason with their current core seemingly hitting their plateau the
SALT LAKE CITY, UT・1 DAY AGO
Sportsnaut

The Las Vegas Aces look to complete a perfect four-game homestand on Monday when they host the slumping Los Angeles
LAS VEGAS, NV・4 HOURS AGO
Sportsnaut

The New York Liberty signed 2020 WNBA Rookie of the Year Crystal Dangerfield to a hardship contract, the team announced
NBA・1 DAY AGO