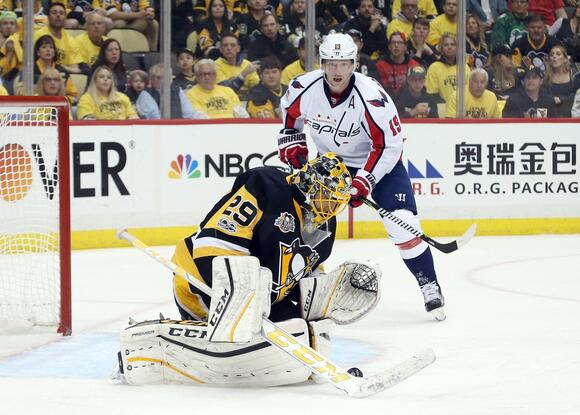 PITTSBURGH (93.7 the Fan) If you can’t beat them, join them! And by “join them” we mean take all of their players.

All of those names, aside from Sprong, played big roles in the Penguins back-to-back Stanley Cup victories in 2016 and 2017.

The Capitals, however, have been linked to another former Penguins in fan favorite goalie Marc Andre Fleury.

Yes, according to rumors around the NHL, the Capitals have shown interest in acquiring the same goalie that kicked them out of the postseason on multiple occasions.

The Capitals did get one over on Fleury in 2018 when they beat Flower and the Vegas Golden Knights to win the Cup.

The Chicago Blackhawks, acquired Fleury during the offseason from the Knights for virtually nothing, and have been abysmal ever since.

With a 15-20-7 record, the Hawks are looking to be sellers at the NHL’s trade deadline and the Capitals have been in need of stable goaltending.

A trade between the Blackhawks and Capitals for the future Hall of Fame goalie is a longshot right now, but anything is possible and Washington has a track record of taking former Penguins with a couple of rings.

Another obstacle in keeping the trade from happening is Fleury’s own feelings.

According to Elliotte Friedman, Fleury is still ‘very much a Penguin and I think sometimes we underestimate how much passion there is in these rivalries.”

Aside from 2018 with the Golden Knights, Fleury and the Penguins have largely owned the Capitals.

In 44 career games against the Capitals, Fleury is 26-14-2 with 4 shutouts in regular season play.

Hextall believes the Rangers were targeting the head

There is little doubt in Pens GM Ron Hextall’s mind that the Rangers had intent on head shots in their playoff series, not just against Sidney Crosby
NEW YORK CITY, NY・1 HOUR AGO
93.7 The Fan

Hextall says Pens in talks with Malkin and Letang

Listen as Pens GM Ron Hextall says they want to bring back Evgeni Malkin and Kris Letang, describes when they have had talks & what free agency looks like
PITTSBURGH, PA・6 HOURS AGO
The Associated Press

PITTSBURGH (AP) — Ke’Bryan Hayes had three hits and scored the tiebreaking run on Yoshi Tsutsugo’s infield single in the eighth inning as the Pittsburgh Pirates beat the Colorado Rockies 2-1 on Monday night. Hayes singled to lead off the eighth against Tyler Kinley (1-1), stole second...
PITTSBURGH, PA・35 MINUTES AGO