Blackhawks to consider candidates from outside hockey for GM 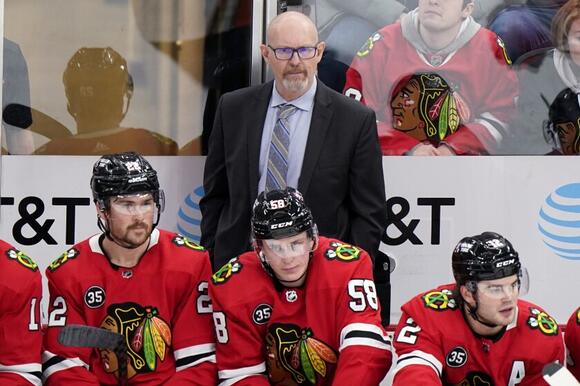 The Chicago Blackhawks are taking an unusual approach to their search for their next general manager and plan to make a decision before the NHL trade deadline in March.

Blackhawks CEO Danny Wirtz, the son of team owner Rocky Wirtz, said Wednesday the interview process will include candidates “both inside and outside of hockey." Danny Wirtz and President of Business Operations Jaime Faulkner will lead the interview process, with help from an advisory group “comprised of leaders across the sports industry as well as our search partners,” Danny Wirtz said.

“We plan to create a next generation hockey operations department with a path to sustained success for the Chicago Blackhawks,” Danny Wirtz said in a release. “Our next step is to find the right leader, and we will begin to reach out to potential candidates this week to interview for the general manager role. That position will be the highest-ranking executive in hockey operations and will report directly to me.”

Interim GM Kyle Davidson will interview for the position, and Wirtz said Davidson “will continue to have full autonomy of hockey decisions in the meantime.”

Davidson was elevated to the interim job after longtime general manager Stan Bowman resigned in October in the wake of a report by an outside law firm that found the organization mishandled allegations that an assistant coach sexually assaulted a player during the team’s Stanley Cup run in 2010.

The report also played a role in the departure of Al MacIsaac, another of Chicago's top hockey executives, and the NHL fined the team $2 million for “the organization’s inadequate internal procedures and insufficient and untimely response.”

Danny Wirtz said the organization is looking to hire “the best strategic mind who can build and develop a hockey operations leadership team that will be best in class across professional sports.”

“And without question, he or she must be someone who exhibits our organizational values,” he said.

Rocky and Danny Wirtz have not faced questions from the media since the Jenner & Block report was released, but Danny Wirtz said the organization is planning a “town hall-style meeting” for next week that will include fans, partners, staff and media.

Danny Wirtz's update on the GM search comes just after the midway point of the season for Chicago, which dropped to 15-20-7 with Monday night's 2-0 loss at Colorado. The Blackhawks faced the Red Wings in Detroit on Wednesday night.

It also comes after what he described as a six-week “discovery and research process that explored all functions and structure of our hockey operations department.”

“This top to bottom exercise revealed an incredible amount of in-house talent while also highlighting areas for growth and opportunities to become more competitive,” Wirtz said.

Jay Cohen can be reached at https://twitter.com/jcohenap