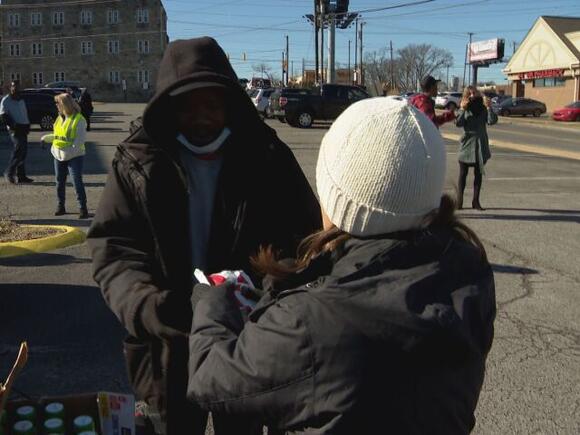 Lee did it in honor of Tennessee Highway Patrol Trooper Aaron Rumford, who was on her security detail at the time of his off-duty death.

"He had a bunch of points on his Chick-fil-A app, and one of our last conversations with him he said he wanted to use those points to buy food from Chick-fil-A to give out to the homeless. In his honor, that's what we're doing today," Lee said.

Rumford died in a September motorcycle crash. The Lee family was very close with him.

"He had a heart for others and saw the needs of others, and would be willing to help them and do whatever it took. He did that for us and was always looking out for other people, and that's partly what made him so special," Lee said.

Lee distributed food at City Road Chapel and two homeless encampments near downtown Nashville. They were prepared to feed 60-90 people.

The first lady's initiative Tennessee Serves and the Chick-fil-A on Murfreesboro Road in Franklin split the costs of the sandwiches.

A new neighborhood art installation is paying homage to the past by celebrating women of North Nashville who've left a mark on the community.
NASHVILLE, TN・22 HOURS AGO
NewsChannel 5 WTVF

After a cardiac arrest episode, a 16-year-old Sumner County student-athlete credits the school nurse, trained teachers and an AED with saving his life.
SUMNER COUNTY, TN・11 HOURS AGO
NewsChannel 5 WTVF

Every year, a child ambassador is named to represent the hospital. This year’s pick — 10-year-old Mattie Ann Hawell — is the perfect fit as an accomplished equestrian.
KENTUCKY STATE・3 DAYS AGO
NewsChannel 5 WTVF

The Franklin Rodeo is back and ready to host nearly 300 professional cowboys and cowgirls competing for over $50,000 in prize money.
FRANKLIN, TN・1 DAY AGO
NewsChannel 5 WTVF

It's been five months since a violent tornado stole 57 lives and damaged thousands of buildings in Kentucky. Many families who lost their homes are still living in temporary housing. An organization called God's Pit Crew will have two families back in homes by the end of May.
BREMEN, KY・21 HOURS AGO
NewsChannel 5 WTVF

A murder mystery more than a thousand miles away could bring answers to a Clarksville woman hoping to track down her father’s killer nearly 30 years later.
CLARKSVILLE, TN・1 DAY AGO

Nurses from across the country were watching the judge's decision to sentence former nurse Radonda Vaught to three years of supervised probation, and dozens of them showed up in Nashville to hear the judge read her sentencing decision.
NASHVILLE, TN・3 DAYS AGO
NewsChannel 5 WTVF

MNPD's mounted patrol horses will soon be moved from their long-time home at Ellington Agricultural Center to a temporary location.
NASHVILLE, TN・21 HOURS AGO
NewsChannel 5 WTVF

MNPD to expand Partners in Care program to central precinct

Nashville is expanding its pilot program that pairs mental health professionals with police officers in its downtown area.
NASHVILLE, TN・1 DAY AGO

Habitat for Humanity getting into affordable housing arena

Habitat for Humanity of Greater Nashville is helping people who want to own a home in Music City.
NASHVILLE, TN・2 DAYS AGO
NewsChannel 5 WTVF

The Basement East wins ACM Club of the Year

Nashville live music venue The Basement East is receiving its first ever Academy of Country Music (ACM) Award for ACM Club of the Year just two years after its destruction by the March 2020 tornadoes.
NASHVILLE, TN・1 DAY AGO
NewsChannel 5 WTVF

Today, Mayor Cooper will be on site with volunteers to help put the finishing touches on some of the new homes in North Nashville.
NASHVILLE, TN・2 DAYS AGO
NewsChannel 5 WTVF

To celebrate Emergency Medical Service (EMS) practitioners and the important work they do, the lights of the Korean War Veterans Memorial Bridge will be lit up in orange and blue on Sunday.
NASHVILLE, TN・2 DAYS AGO