Tottenham could face competition for Adama Traore with the Wolves winger 'wanted by former club Barcelona' in the final days of the transfer window... but 'Xavi can only target their La Masia graduate if Ousmane Dembele's future is resolved'

Barcelona are reportedly eyeing a January deal for Wolves winger Adama Traore - but a potential move depends heavily on the future of Ousmane Dembele.

Xavi is desperate to strengthen his Barca attack before the winter window draws to a close next week, having lost Ansu Fati to yet another injury for the next three months.

Former Real Madrid striker Alvaro Morata was believed to be his top target, however a deal to bring him to the Nou Camp appears too complicated given he is currently on loan at Juventus from Atletico Madrid.

According to ESPN, with Morata seemingly out of reach Barca have now turned their attention to Traore - the La Masia graduate who left them to join Aston Villa in 2015.

Catalans chiefs are understood to have held talks with Wolves over a £17million deal to re-sign their former academy star earlier this month.

The news comes as a blow to Antonio Conte, who is reportedly hoping to lure Traore to Tottenham before the January deadline passes.

Spurs saw an initial £15million bid rejected by Wolves last week but were hoping to come back in and reach an agreement with their Premier League colleagues.

Now they could face competition from Barca for his signature, yet only if Dembele signs a new contract or leaves the club first.

Dembele only has five months remaining on his current contract and is yet to put pen to paper on an extension, with Nou Camp officials telling him last week to find a new club before the window closes.

But the France winger's agent is said to have met with Xavi and sporting advisor Jordi Cruyff to tell them his client still wants to sign a new deal in Catalonia. 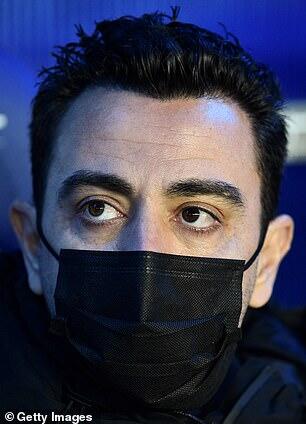 Any business Barca complete in the final days of the January window is largely dependent on his contractual situation, as they do not have room within their La Liga-imposed salary cap to register any more signings.

Should he pen an extension, the Spanish outfit can then free up space on their wage bill by spreading out the remaining amortisation payments on his transfer fee and backloading his salary.

And if he leaves, there will also be room for Barca to make a beeline for Traore in the coming days.

'We play this game for Ukraine': Jurgen Klopp dedicates the Champions League final between Liverpool and Real Madrid to the war-torn country... as he insists UEFA sent the 'right message' by moving the final from Saint Petersburg to Paris

Liverpool boss Jurgen Klopp has backed UEFA's decision to move the Champions League final from Russia to France, and has sent a message of support to Ukraine ahead of Saturday's showpiece event. The final was originally due to be played at the Gazprom Arena in Saint Petersburg, but was switched...
UEFA・12 HOURS AGO
Daily Mail

'Wherever Sadio will play next season he will be a big player': Jurgen Klopp remains coy over suggestions that the Champions League final could be Mane's last game for Liverpool with Bayern Munich interested in signing the winger

Jurgen Klopp has refused to give much away over Sadio Mane's future at Liverpool amid speculation he could join Bayern Munich this summer. German reports have suggested that Mane will say 'goodbye' to the Reds after the Champions League final with Real Madrid on Saturday. When asked in his pre-match...
PREMIER LEAGUE・5 HOURS AGO
Daily Mail

Tottenham are 'in pole position to sign out of contract Inter Milan star Ivan Perisic on a two-year deal ahead of Chelsea and Juventus'... with Antonio Conte desperate to sign the Croatian after committing his future to Spurs

Tottenham look set to win the race to sign Ivan Perisic on a free transfer after the club made a contract offer to the Croatian forward. The 33-year-old is out of contract at Inter this summer and the Serie A side want to keep him, but are struggling to reach an agreement as reports in Italy claim that he is asking for a three-year deal worth £100,000-a-week.
SAN ANTONIO, TX・6 HOURS AGO
Daily Mail

From his friendship with David Beckham to being hailed as 'the future of Welsh football', Nottingham Forest star Brennan Johnson is a Premier League target but must first take on the biggest test of his career in the Championship play-off final

If Brennan Johnson ever needs advice on how to handle his growing fame, he can always turn to one of the game’s brightest stars. The Nottingham Forest forward will try to help his club return to the Premier League for the first time this century on Sunday as they prepare for the Championship play-off final against Huddersfield Town, said to be worth at least £150million to the winner.
PREMIER LEAGUE・7 HOURS AGO

Huddersfield have the form, defensive resilience and Wembley experience but Nottingham Forest boast more potential match-winners as they try to reach the Premier League... so, who will have the edge in Sunday's £135m Championship Play-off final?

The figure seems to swell with every passing year but Sunday's Championship play-off final will be worth at least £135million to one of Nottingham Forest or Huddersfield Town. That was the estimated windfall, over three years, calculated by accountants Deloitte in 2020 if the promoted side stays just one...
PREMIER LEAGUE・10 HOURS AGO
Daily Mail

A player arrested after her team-mate was attacked by masked men with IRON BARS, infidelity claims, manager suspended - and the title's sliding away! Inside PSG Women's crazy scandalous season

A tumultuous season for Paris Saint-Germain Women took another twist earlier this week as manager Didier Olle-Nicolle was suspended following allegations of 'inappropriate behaviour'. In a statement, the club said that players were exposed to events that, 'if proven', would be 'incompatible' with PSG's 'sporting and human values'. Meetings with...
PUBLIC SAFETY・1 DAY AGO
Daily Mail

Lionel Messi and his father have told Barcelona president Joan Laporta to stop talking of a return to the club for the Argentine superstar after growing irritated by his continued comments. Messi joined Paris St Germain last summer after Barcelona failed to fall in line with La Liga financial regulations...
SOCCER・9 HOURS AGO
Daily Mail

Sorba Thomas was playing non-league football for Boreham Wood 16 months ago... now the Terriers winger is looking to complete his Hollywood story as Huddersfield face Nottingham Forest with a Premier League place on the line

Never mind the Premier League, Sorba Thomas has Hollywood in his sights. ‘I am living a movie right now,’ grins the Huddersfield and Wales winger. ‘I hope they can make a film and Will Smith can play me!’. Screenwriters should take note. For in the next eight...
PREMIER LEAGUE・11 HOURS AGO

'Maybe it's perfect but it doesn't look like it': Liverpool boss Jurgen Klopp admits concern over Paris pitch which was only laid on Thursday... but vows not to use it as an excuse if they fall short in Champions League final

Jurgen Klopp has insisted he will not use the state of the Stade de France pitch as an excuse if Liverpool fall short in their quest to become champions of Europe. A new playing surface was only finally laid at 1am on Thursday and it is being heavily watered before the clash with Real Madrid.
PREMIER LEAGUE・8 HOURS AGO
Daily Mail

Spain have launched an official appeal on the decision to throw them out of the 2023 Rugby World Cup on the grounds of fielding an illegible player. Last month, World Rugby removed Spain from their sport’s biggest tournament after the passport of the country’s player Gavin van den Berg was allegedly tampered with.
RUGBY・6 HOURS AGO
Daily Mail

Reborn in Rome! Chris Smalling and Tammy Abraham have gone from outcasts to heroes in Italy after lifting the Conference League... the ex-Man United defender was man of the match in the final while the former Chelsea star has been a scoring sensation

Huddersfield is set to be a ghost town this weekend as their rugby league and football teams flock to the capital... with Giants and England winger Jermaine McGillvary joking: 'Last person to leave needs to shut the door on their way out!'

'The last person to leave needs to shut the door on their way out,’ says Jermaine McGillvary. The Huddersfield Giants and England winger is not wrong. On Saturday, McGillvary and his team-mates face Wigan at Tottenham in rugby league’s Challenge Cup final. On Sunday, his hometown football club will be at Wembley to take on Nottingham Forest for a place in the Premier League.
PREMIER LEAGUE・7 HOURS AGO

Roma are reportedly under investigation from federal prosecutors for anti-sporting chants and the behaviour of their players following their open top bus parade celebrating Europa Conference League glory. The Serie A side clinched their first trophy in 14 years after beating Feyenoord 1-0 thanks to Nicolo Zaniolo's 32nd minute strike.
UEFA・12 HOURS AGO
Daily Mail

Twickenham is set to host a blockbuster series of fixtures next summer ahead of the 2023 World Cup — including an historic encounter between New Zealand and South Africa. England are planning four warm-up matches before the next global showpiece tournament and there is speculation that they will take one of them away from their familiar home — as they did for the game against Italy in Newcastle in 2019.
RUGBY・7 HOURS AGO