Who says no to this Mavericks trade for Jaylen Brown? 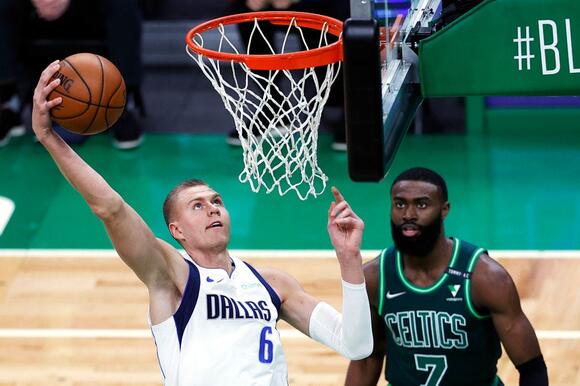 DALLAS (105.3 The Fan) - Though they've been playing well lately, there's no doubt that the Mavs could use a roster shakeup. The K&C Masterpiece has concocted a blockbuster trade between the Mavs and the Celtics that would see some big names go both ways.

Watch the video above or listen to the audio below starting at 17:25.

Brown, 25, is averaging 24 points, 6.6 rebounds, and three assists per game for a Celtics team that just can't seem to get over the hump with a pairing of him and two-time All-Star Jayson Tatum.

The guard/forward is a solid shooter from three-point range (career 37.6 percent) and is seen as an excellent defender.

Schroder would fit in as a capable scorer off the bench (averages 15.4 points per game) with the Mavs losing their sixth-man Tim Hardaway Jr. to a broken foot on Tuesday night.

As for Porzingis and Brunson, KP has played well this season when he's been on the floor. He's very active on the defensive end and appears to be moving much better than he was last season. He is, however, struggling from deep this year, shooting a career-low 28.4 percent. This sort of trade would make the Mavs incredibly thin in their front-court, but it would give Dallas a player in Brown, who can be a more dependable robin next to Luka Doncic.

In normal circumstances, Dallas would likely not want to part with Porzingis or Brunson, but you have to give up talent to get a talented player such as Brown in return.

That brings us to Brunson, a player Dallas would love to keep, but also who is set to hit free agency this coming offseason. The point guard is reportedly seeking a four-year, $80 million contract, according to a report .

The guard has stepped up his game this season, averaging 15.7 points, 5.5 assists, and 3.8 rebounds per game, all of which are career-bests.

There's been a lot of reports of teams showing interest in Brunson and free-agent-to-be Dorian Finney-Smith ahead of the trade deadline, so Dallas shouldn't have an issue moving one of them if they wanted to go down that road to avoid having to pay the luxury tax.

Memphis Grizzlies All-Star Ja Morant sent out two tweets about Luka Doncic on Sunday night. Doncic and the Dallas Mavericks are playing the Phoenix Suns in Game 7 of their second-round playoff series.
MEMPHIS, TN・1 DAY AGO
105.3 The Fan

The stars were out Sunday evening in Phoenix, assumingly expecting the Suns to eliminate the Mavericks from the postseason in Game 7. Lil Wayne was among them, and he was in for quite a surprise.
DALLAS, TX・20 HOURS AGO
105.3 The Fan

After the win, Luka Doncic, fresh off a stellar performance that saw him pump in 35 points in just three quarters, shared a warm embrace with Dirk Nowitzki, the greatest player in Dallas’ franchise history - for the time being.
DALLAS, TX・1 DAY AGO
105.3 The Fan

Do the Mavs have the best player/coach duo in the NBA playoffs?

The Mavs had an incredible game in their final matchup against the Phoenix Suns, beating them 123-90! Kevin Gray & RJ discuss why Luka Doncic and Jason Kidd are the best of the best at their position among the remaining teams in this playoff series.
PHOENIX, AZ・22 HOURS AGO

The betting odds are out for the Western Conference Finals series between the Mavericks and the Warriors, and Shan and RJ broke it all down on Tuesday’s show.
DALLAS, TX・28 MINUTES AGO
105.3 The Fan

Mavs GM Nico Harrison on destroying the Suns, being "greedy" for more success

Dallas Mavericks general manager Nico Harrison joined the K&C Masterpiece to recap his thoughts during the Mavs’ domination of the Suns in Game 7, how this team isn’t satisfied yet, how Jason Kidd has transformed the team’s locker room, and more!
DALLAS, TX・22 HOURS AGO
105.3 The Fan

Former Dallas Mavericks head coach Rick Carlisle did something no other head coach in franchise history was able to do in three decades– win an NBA title.
DALLAS, TX・17 HOURS AGO
105.3 The Fan