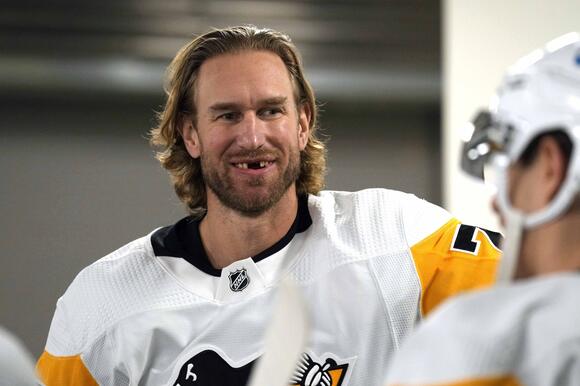 PITTSBURGH (93.7 The Fan) – When forward 36-year-old Jeff Carter came to the Pens via trade in April, it was thought he would be a nice fill-in with Evgeni Malkin injured and then potentially a third-line center to finish out his career. He will likely finish his career as a Penguin, but after two more seasons.

The 17-year NHL veteran has played 36 games this season with 12 goals and 14 assists in 18 minutes and 30 seconds of average ice time a game. The assist numbers are already the most since the 2018-19 season. In 50 career games with the Pens-21 goals and 16 assists.

“Jeff’s experience and versatility have made him a valuable addition to our team,” said Penguins general manager Ron Hextall in a statement released by the team.  “In addition to his on-ice contributions, his team-first attitude has made him a leader inside our locker room and we are happy to have him under contract for two more years.”

Carter is currently centering a third line with Evan Rodrigues and Brock McGinn, but has also played some wing.  He also logs some minutes on the power play and is winning 57% of his faceoffs.

The 6’3” forward was the 11 th overall pick in the 2003 NHL Draft by the Philadelphia Flyers.  The London, Ontario native is 12 career points shy of 800 and already a two-time Stanley Cup winner.

He could potentially have gotten more money elsewhere, but listen to what Bryan Rust said became factors as he signed a new 6-year contract with the Pens
PITTSBURGH, PA・1 DAY AGO
93.7 The Fan

Rust gets his wish, so do the Pens with new contract

Pens forward Bryan Rust said he didn’t want to rob anyone and in getting his new contract on Saturday night, he did himself and his team right
PITTSBURGH, PA・2 DAYS AGO
93.7 The Fan

On Friday, a 38-inning shutout streak against the Pirates ended for Wainwright after first baseman Michael Chavis hit a solo home run, winning his last 10 starts against Pittsburgh.
PITTSBURGH, PA・1 DAY AGO
93.7 The Fan

Trubisky was asked about, but did not confirm, the order the quarterbacks were used. But video of the practice shows how the Steelers split up he, Mason Rudolph, Kenny Pickett and Chris Oladokun.
PITTSBURGH, PA・3 HOURS AGO

The Pirates have made one of the reported pitching being called up to the Big Leagues official. Right-handed pitcher Yerry De Los Santos has been officially selected from Triple-A Indianapolis.
PITTSBURGH, PA・1 DAY AGO
93.7 The Fan

The Bucs best home run hitter goes on the injured list as Tuesday night’s starting pitcher called up from AAA and an OF makes his big-league debut
PITTSBURGH, PA・4 HOURS AGO