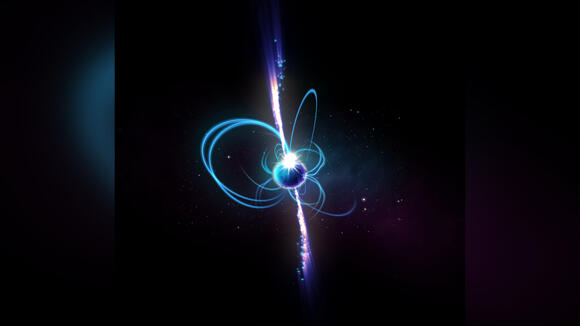 While mapping radio waves across the universe, astronomers happened upon a celestial object releasing giant bursts of energy — and it’s unlike anything they’ve ever seen before.

The spinning space object, spotted in March 2018, beamed out radiation three times per hour. In those moments, it became the brightest source of radio waves viewable from Earth, acting like a celestial lighthouse.

Astronomers think it might be a remnant of a collapsed star, either a dense neutron star or a dead white dwarf star, with a strong magnetic field — or it could be something else entirely.

A study on the discovery published Wednesday in the journal Nature .

“This object was appearing and disappearing over a few hours during our observations,” said lead study author Natasha Hurley-Walker, an astrophysicist at the Curtin University node of the International Centre for Radio Astronomy Research, in a statement.

“That was completely unexpected. It was kind of spooky for an astronomer because there’s nothing known in the sky that does that. And it’s really quite close to us — about 4,000 light-years away. It’s in our galactic backyard.”

Curtin University doctoral student Tyrone O’Doherty made the unusual discovery while using the Murchison Widefield Array telescope in the outback of Western Australia.

“It’s exciting that the source I identified last year has turned out to be such a peculiar object,” O’Doherty said in a statement. “The MWA’s wide field of view and extreme sensitivity are perfect for surveying the entire sky and detecting the unexpected.”

What remains of a massive star’s death

Flaring space objects that appear to turn on and off are known as transients.

“When studying transients, you’re watching the death of a massive star or the activity of the remnants it leaves behind,” said study coauthor Gemma Anderson, ICRAR-Curtin astrophysicist, in a statement. “‘Slow transients’ — like supernovae — might appear over the course of a few days and disappear after a few months. ‘Fast transients’ — like a type of neutron star called a pulsar — flash on and off within milliseconds or seconds.”

This new, incredibly bright object, however, only turned on for about a minute every 18 minutes. The researchers said their observations might match up with the definition of an ultra-long period magnetar. Magnetars usually flare by the second, but this object takes longer.

“It’s a type of slowly spinning neutron star that has been predicted to exist theoretically,” Hurley-Walker said. “But nobody expected to directly detect one like this because we didn’t expect them to be so bright. Somehow it’s converting magnetic energy to radio waves much more effectively than anything we’ve seen before.”

The researchers will continue to monitor the object to see whether it turns back on, and in the meantime, they are searching for evidence of other similar objects.

“More detections will tell astronomers whether this was a rare one-off event or a vast new population we’d never noticed before,” Hurley-Walker said.

A massive crater known as the “mouth to hell” began opening in the 1960s. Now, over 60 years later, the crater continues to grow, swallowing everything in its path. The most worrying part, though, is that scientists have no idea how to stop it. Russia’s “mouth to hell”...
SCIENCE・2 DAYS AGO