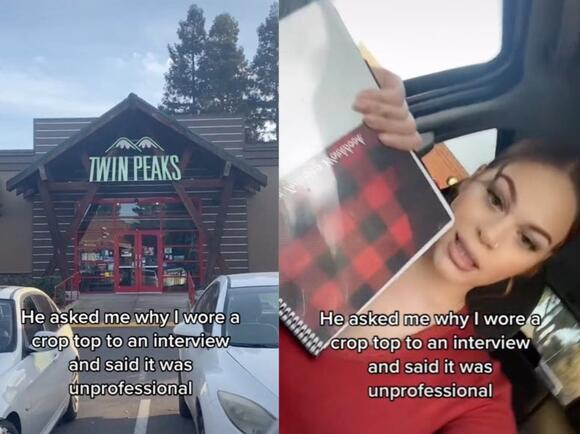 Rule of thumb: dress for the job you want. This TikToker took that advice literally when she revealed in a viral video that a hiring manager called her “unprofessional” for wearing a crop top to a job interview .

In the TikTok , Em records herself in the car wearing a short-sleeve red crop top. The voiceover says, “He asked me why I wore a crop top to an interview and said it was unprofessional.”

Em cuts the video to show the location of the interview, a Twin Peaks restaurant, and a uniform. “If you know, you know,” she says.

The video received over one million views, and TikTokers backed Em’s clothing choice in the comments.

The top comment came from user @kaylana1998, who said, “You have to dress for the part. You don’t dress the same for an interview at Walmart vs a bottle girl at the club.”

Bae you don’t understand they need to know I have t!ts 😩😂

Men are going to agree with whatever she's doing as long as she's got her clothes off. She knew she wasn't going to be hired because of her IQ.

Maybe people should have respect and wear actual clothes for job interviews… being in management for 20 + years, I would absolutely not hire anybody who doesn’t have enough decency to dress properly. Sweatpants, leggings, crop tops, ripped jeans are not acceptable. If you don’t have enough respect to change out of pajamas, then why would I think you can be reliable for anything

maybe she doesnt look as good as she thinks she does. she might have to find a job where she has to actually work with her hands and actually live off the sweat of her back.

Audio Revealed: Johnny Depp Told Amber Heard 'It's Going To Be A Bloodbath' If He Didn't Walk Away From Their Marriage

More and more is coming out about Johnny Depp and Amber Heard's tumultuous marriage. In audio clips that were heard during the Monday, April 25, cross examination, some of their conversation from couples therapy was heard — and it wasn't pretty. “Walking away is necessary — is necessary, especially between you and I. It is of utmost importance, because the next move, if I don’t walk away — or just go out for a little while — it’s just going to be a bloodbath,” Depp said in the recordings. “It’s just not worth it.”Heard responded that she just wanted the...
CELEBRITIES・26 DAYS AGO
Newsweek

Heard was shown choosing not to sit with her attorney when her questioning concluded and instead exited the courtroom.
FAIRFAX, VA・3 DAYS AGO
Daily Mail

Brenda Edwards broke down in tears as she revealed she was holding her son Jamal's hand aged 31 in February of this year, while confirming it was from a cardiac arrest. The Loose Women panellist, 53, also revealed details of his Chelsea FC-themed funeral for the very first time in a chat with her co-star Coleen Nolan during the ITV show on Monday.
CELEBRITIES・26 DAYS AGO
Shreveport Magazine

According to the boy’s mothers, a teacher at the charter school decided to cut their son’s hair while he was in distress, instead of calling them for help. Now, the mothers claim that this will not go unnoticed until everyone is held accountable. The boy’s parents were reportedly upset that the teacher didn’t find a more effective way to help their son aside from cutting his hair. The boy’s mothers also said that their son was proud of the afro he was growing. “What made her think that this is OK? if you were going to help my child why wouldn’t you do it the proper way, common sense way, the helpful way? By getting him some real help?” one of the mothers said.
MINNESOTA STATE・24 DAYS AGO

Ryan Seacrest is weighing in on the ongoing court battle between the Kardashian-Jenner family and Blac Chyna.According to a new report from Radar, the TV producer made some bombshell claims in his deposition, which the famous family is trying to get blocked from the jury. As reported by the outlet, Seacrest — who is scheduled to take the stand in the trial — shockingly revealed in his deposition that he wanted Chyna's show with Rob Kardashian, Rob & Chyna, to move forward, despite the Kardashian-Jenner squad's claim that there was fear over Rob's safety as a result of the exes'...
CELEBRITIES・25 DAYS AGO
The Independent

Gwyneth Paltrow is a doting mom to two teenage children, Apple and Moses, who she shares with ex-husband Chris Martin. The family are notoriously private, but over the weekend the award-winning actress gave a rare insight into their upcoming plans - and how they are changing things up this year for Mother's Day.
FAMILY RELATIONSHIPS・25 DAYS AGO
Newsweek

50 Cent cast doubt on Megan Thee Stallion's recent comments about not having been in an “intimate relationship” with Tory Lanez, prior to the infamous shooting in July 2020 which left her with gunshot wounds. Megan's comment came during a recent interview with Gayle King, during which she...
CELEBRITIES・25 DAYS AGO
Popculture

Spring is always a big time for engagements and weddings, and two beloved internet personalities are the latest to update their relationship status. On April 18, Rachel "Seltzer" Quirico revealed she and longtime boyfriend Trevor "TorcH" Housten were tying the knot after 17 years together. Both of them are beloved figures in the esports world, with Seltzer notably starring in the Syfy reality show WCG Ultimate Gamer. She's also hosted numerous esports tournaments and events for TV/streaming outlets; she also made a recent appearance on G4 TV's Boosted.
RELATIONSHIP ADVICE・25 DAYS AGO
PopCrush

90 Day Fiancé: Before the 90 Days star Johnny Chao is showing off a new look on social media. The reality TV star rocked a fresh-faced look on the show. However, Chao debuted some new facial hair in his most recent post on Instagram. More specifically, he grew a beard and mustache.
TV & VIDEOS・24 DAYS AGO
hotnewhiphop.com

It seems Coi Leray is getting fed up with the drama. She and her father, Benzino, have not seen eye to eye for quite some time, and despite numerous attempts to mend their relationship, they keep ending up back at square one. Yesterday, 50 Cent, whose been feuding with Benzino...
CELEBRITIES・26 DAYS AGO
Newsweek

"This is very concerning," wrote one commenter. "It's so much bigger than mac and cheese."
INTERNET・24 DAYS AGO
Insider

"The sisters are clearly concerned for our brother's safety and the credibility of the brand," Khloe Kardashian wrote in a 2016 email.
LOS ANGELES, CA・25 DAYS AGO