Argentina coach Scaloni to miss WCup qualifier due to virus 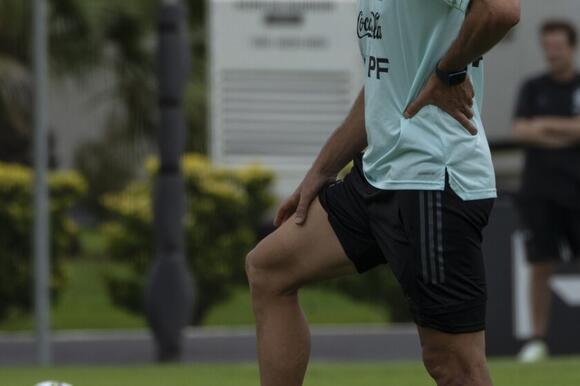 Argentina coach Lionel Scaloni will not travel for Thursday's World Cup qualifying match against Chile after testing positive for COVID-19.

Scaloni told a news conference Wednesday that his assistants Walter Samuel and Roberto Ayala will be in charge for the match. Argentina has already secured a spot at the tournament in Qatar, while Chile is still in contention.

“I am well, recovered. But the PCR remains positive," Scaloni said.

Argentina superstar Lionel Messi will also be absent as he continues to recover from the virus. Paulo Dybala is expected to be his replacement in the team's starting lineup.

“I talked to (Messi) after he tested positive for COVID. It affected him a lot, he had the roughest variant," Scaloni said. “It is important that he recovers, feels fit because there will be important moments ahead.”

The virus has also affected Chile, with defenders Mauricio Isla and Francisco Sierralta and winger Jean Meneses out.

Brazil and Argentina have both qualified for the World Cup, with two more automatic spots up for grabs in South American qualifying. The fifth-place team advances to a playoff against an Asian opponent. Only last-place Venezuela, with seven points, is out of contention.

'If you don't put the cherry on top, no one will remember what happened before': Real Madrid legend Iker Casillas warns Los Blancos must cement incredible run to the Champions League final with victory

Real Madrid legend Iker Casillas has warned his former club their thrilling Champions League wins over PSG, Chelsea and Manchester City will be forgotten if they fail to win the trophy on Saturday. The former goalkeeper won the tournament three times with Los Blancos and holds the record for the...
UEFA・23 MINUTES AGO
Daily Mail

Jose Mourinho takes in the jubilant scenes as he waves to Roma fans outside the Colosseum during their bus parade... with thousands gathering to celebrate the club's first European trophy in 60 years

Thousands of fans gathered to celebrate Roma's first European trophy in 60 years as the club marked their historic victory with a bus parade. Roma clinched the inaugural Europa Conference League on Wednesday with a 1-0 victory over Dutch side Feyenoord, thanks to a Nicolo Zaniolo goal. There was magical...
UEFA・17 MINUTES AGO