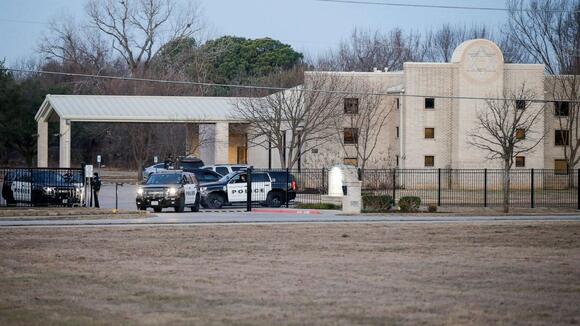 A man faces a federal charge for allegedly selling the gun used in the Texas synagogue hostage situation earlier this month, authorities said.

Henry Williams, 32, faces one charge of being a felon in possession of a firearm in connection with the hostage crisis at Congregation Beth Israel in the Fort Worth suburb of Colleyville on Jan. 15.

The armed suspect, identified by authorities as 44-year-old British citizen Malik Faisal Akram, died in the incident when an FBI hostage rescue team breached the synagogue after an 11-hour standoff.

The FBI said it discovered Williams' alleged ties to Akram through an analysis of Akram's phone records after his death.

Agents first interviewed Williams on Jan. 16, during which he allegedly said he recalled meeting "a man with a British accent," the Department of Justice said .

Agents interviewed Williams again after his arrest on an outstanding state warrant on Monday, during which he allegedly confirmed he sold Akram the handgun at an intersection in South Dallas after viewing a photo of the suspect, according to the Justice Department.

"Williams allegedly admitted to officers that Mr. Akram told him the gun was going to be used for 'intimidation' to get money from someone with an outstanding debt," the Department of Justice said in a statement.

Cellphone records for both men also show their phones were in close proximity on Jan. 13, according to prosecutors.

Williams was arrested Tuesday on the firearm charge and made his first appearance before a magistrate judge Wednesday afternoon. According to the Department of Justice, Williams was previously convicted of aggravated assault with a deadly weapon and attempted possession of a controlled substance.

"Federal firearm laws are designed to keep guns from falling into dangerous hands. As a convicted felon, Mr. Williams was prohibited from carrying, acquiring, or selling firearms," U.S. Attorney for the Northern District of Texas Chad Meacham said in a statement. "Whether or not he knew of his buyer's nefarious intent is largely irrelevant -- felons cannot have guns, period, and the Justice Department is committed to prosecuting those who do."

A detention hearing has been scheduled for Monday. ABC News has reached out to Williams' attorney for comment.

A rabbi and three members of the synagogue were taken hostage during the incident. All four managed to escape unharmed.

FBI agents said the suspect was demanding the release of a convicted terrorist and believe the location was intentionally targeted because it was the closest synagogue to Carswell Air Force Base near Fort Worth, where the prisoner is being held.

Multiple law enforcement sources told ABC News the suspect was demanding the release of Aafia Siddiqui, who was convicted of assault and attempted murder of a U.S. soldier in 2010 and sentenced to 86 years in prison.

In the weeks since the incident, investigators have been digging into the suspect's social media and personal devices to try and find out more about his travel and associates.

Four men have also been arrested in England within the past week as part of the probe, British authorities said.

Police in Alabama say a South Carolina truck driver has confessed to killing a woman who disappeared 21 years ago and to hiding her body in a suitcase. Police in Bessemer, Alabama told news outlets that South Carolina native Brian Jones traveled back to Alabama last month and admitted to killing 41-year-old Janet Luxford in 2001. He then led investigators to a green suitcase with bones inside, police said.
BESSEMER, AL・29 DAYS AGO
Fox News

A sheriff in Florida arrested his own daughter on drug charges as his department continues its war on addictive substances. Franklin County Sheriff A.J. Smith gave a statement on April 19 confirming that his daughter, Kristen Kent, had been arrested under suspicion of meth trafficking two days prior. "Methamphetamine does...
FLORIDA STATE・29 DAYS AGO
CBS News

A 60-year-old man who has been charged in the January 6 insurrection at the Capitol has been identified as the son of a fames American artist. Vincent Gillespie, who has been in a legal battle against his stepmother to gain control of paintings by his father, Gregory Gillespie, was arrested in February on charges relating to the Capitol riot.
ATHOL, MA・28 DAYS AGO

Jurors found a man guilty of all charges for murdering a woman he briefly dated. “I’m still alive,” Brandon Roberts, 29, yelled Tuesday as judicial marshals took him from that courtroom in Bridgeport, Connecticut, according to The Connecticut Post. He shot therapist Emily Todd, 25, in the back...
28 DAYS AGO
Reason.com

How was a man in a Louisiana prison who was supposed to be on suicide watch allowed to smoke insecticide, leading to his death?. That's the question Jennifer Bartie wants answered. The man was her son, 37-year-old Javon Kennerson, who died in December 2020 several weeks after falling into a sudden and severe mental health emergency.
PUBLIC SAFETY・29 DAYS AGO
Newsweek

Bodycam footage captured the snake slithering around the room as an officer attempted to capture it.
BOYNTON BEACH, FL・28 DAYS AGO
USA TODAY

Siblings sentenced to prison after stealing, selling $4 million worth of MacBooks from Stanford

Patricia and Eric Castaneda were sentenced to federal prison last week after the two were caught stealing Apple MacBooks from Stanford University.
STANFORD, CA・28 DAYS AGO

The counterfeit bills will "look authentic, and may even feel authentic," warned Newton County Sheriff's Office in Georgia. Previous incidents have been linked to auto thefts.
COVINGTON, GA・29 DAYS AGO
rolling out

A 14-year-old Black teen with autism was attacked by New York police officers while he was waiting for his siblings to finish checking out at a Target store on April 18. Video shows the Black teenage boy being tackled to the ground by deputies. His sister can be heard in the background yelling “Get off of my brother! What are you doing?”
LAW ENFORCEMENT・28 DAYS AGO
Outdoor Life

Paul Williams fought for his life against a large black bear on the afternoon of April 21 outside of his home in Beaubassin East, a rural Canadian community in southern New Brunswick. “She got me in the face, she got me on my arm,” he said, of his wounds estimated...
NEW BRUNSWICK, NJ・28 DAYS AGO
The Guardian

The poster offered a solution for what someone should do should they see someone in the restroom they don't think matches the sign on the door.
RELIGION・29 DAYS AGO
NBC News

A Florida woman has been arrested after allegedly making a bomb threat to her son’s high school, enraged that her son wasn't being fed enough at the cafeteria. Anaya Metoya Smith, 41, was arrested Wednesday in connection with a threatening voicemail she left at Cocoa High School on Feb. 3 around 5:30 p.m., saying she’d "blow ... up" the school, according to the probable cause affidavit. The city of Cocoa is about 45 miles east of Orlando.
ORLANDO, FL・29 DAYS AGO
The Independent

A first-class passenger on an Arizona-bound Delta Airlines plane was arrested for allegedly using homophobic slurs against a flight attendant and physically assaulting the crew member for not serving him a drink.Christopher Alexander Morgan allegedly threw a glass of ice and an onboard telephone at the flight attendant for refusing to continue serving alcohol to him.Mr Morgan was arrested when flight 2908 touched down at the Phoenix Sky Harbor International Airport on 22 April and is facing charges of interference with flight crew members, which can be punishable with up to 20 years in prison.The passenger called the flight...
PUBLIC SAFETY・29 DAYS AGO
USA TODAY

Alleged Texas school shooting gunman identified: What we know about the suspect, his motive and more.

At least 18 children and as many as 3 adults were killed at Robb Elementary School in Uvalde, Texas, officials say. Here's what we know about gunman.
TEXAS STATE・9 HOURS AGO

Mexican officials are reporting the capture of a La Linea cartel lieutenant believed to be behind the Good Friday massacre of six people on a highway near the U.S. border.
EL PASO, TX・28 DAYS AGO
OK! Magazine

The Santa Fe Sheriff doesn't believe Alec Baldwin is out of the woods just yet in regards to the ongoing investigation into Halyna Hutchins' death on the Rust film set. The late 42-year-old cinematographer was killed while on set of the Western film in October 2021 after the actor, 63, fired a prop gun that contained live rounds. While multiple individuals involved in the production of the film — including Baldwin, the film's assistant director David Halls, armorer Hannah Gutierrez-Reed and more — have been questioned about their apparent roles in the fatal mishap, the Santa Fe Sheriff's Department doesn't...
SANTA FE, NM・28 DAYS AGO
ABC News

Moms search for solutions after daughters die by suicide

Eva Long was a funny, bright and goofy child who became a talented singer, piano player and songwriter in her teen years, according to her mom, Caroline Long. She was also someone who battled depression, an increasingly common mental health struggle among teenagers, but one that Long said Eva worked hard to keep a secret.
FAMILY RELATIONSHIPS・1 DAY AGO
Markets Insider

A shooting at an elementary school in Uvalde, Texas, on Tuesday left at least 21 people dead. The stock prices of the top 2 US gun makers rose in pre-market trading Wednesday. Fear of gun control prompts Americans to stock up on guns and ammo, boosting manufacturers.
UVALDE, TX・38 MINUTES AGO