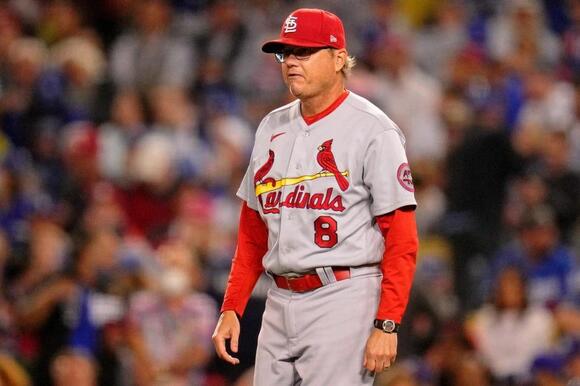 The Padres will share Shildt with the Commissioner’s Office, where Shildt took a job in the On-Field Operations department in December. Shildt told The Belleville News-Democrat that he was given permission by MLB to do both roles.

The Padres interviewed Shildt for their managerial opening in October after firing Jayce Tingler. They ultimate opted for Bob Melvin.

In a stunning move, Shildt was fired by the Cardinals in October after guiding St. Louis to the National League wild-card game on the legs of a 17-game winning streak in September. The Cardinals cited philosophical differences with Shildt despite his 252-199 record in three-plus seasons.

The Cardinals made the playoffs in each of his last three seasons.

What is the fastest pitch ever? Fastest MLB pitches in 2022, Ben Joyce hits 105.5 mph in college

What is the fastest pitch in MLB? New York Yankees closer Aroldis Chapman can light up the radar gun like
CINCINNATI, OH・2 DAYS AGO
Sportsnaut

Sandy Alcantara retired the final 20 batters he faced, leading the host Miami Marlins to an 8-2 win over the
MIAMI, FL・21 HOURS AGO

As the event nears, many racing enthusiasts are wondering about the Preakness Stakes horses competing in the 2022 race, which
BALTIMORE, MD・2 HOURS AGO
Sportsnaut

It doesn’t take much to spark a frenzy among the NFL community. Our latest example of this craze came when
NFL・6 HOURS AGO
Sportsnaut

The New York Yankees will look to maintain their hot streak when they continue a four-game series against the host
BALTIMORE, MD・16 HOURS AGO
Sportsnaut

Regardless of where they’ve played recently, the San Francisco Giants have gotten the better of the Colorado Rockies. The Giants
SAN FRANCISCO, CA・11 HOURS AGO
Sportsnaut

It was back in February that Baltimore Orioles pitcher Matt Harvey testified in the case surrounding former Los Angeles Angeles
BALTIMORE, MD・2 HOURS AGO
Sportsnaut

The condensed schedule, caused by the late start to spring training and the regular season, has led to day-night doubleheaders
CHICAGO, IL・16 HOURS AGO