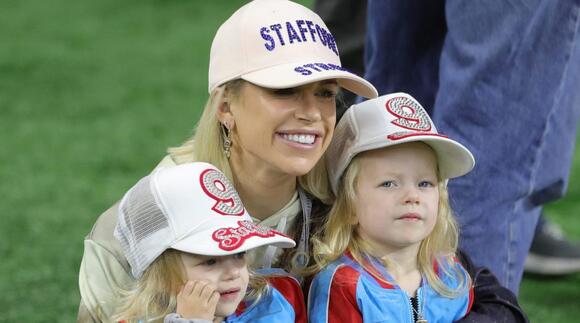 The Rams quarterback and Buccaneers defensive tackle were rather heated during Sunday’s playoff game.

Kelly Stafford, the wife of Rams quarterback Matthew Stafford, commented on the fiery exchange that took place between the quarterback and Ndamukong Suh on Sunday, saying the Buccaneers star “doesn't like” him.

The former Lions teammates got into it over the weekend during the Rams’s victory over Tampa Bay. Suh accused the quarterback of kicking him, but the officials flagged him for taunting when Suh pointed a finger in Matthew's face. Kelly, who was watching the game in the suite at Raymond James Stadium, saw the replay and asked her husband about the exchange.

“I asked Matthew last night and he was like, ‘Honestly, I don’t really know what happened. I didn’t really know who tackled me. But I remember getting put to the ground and someone on me and got him off me to try to get to the next play, and then Suh was in my face telling me he was going to f--- me up,’” Kelly said on her podcast, The Morning After with Kelly Stafford.

Given the history between the pair, Kelly said the incident “infuriated” her. Matthew and Suh were in Detroit from 2010-14, Stafford coming in as the No. 1 pick in '09 and Suh coming in a year later as the No. 2 pick. The franchise made the playoffs twice in the five years they were together.

“To stand up and tell someone that you're going to f--- them up after you spent years together in an organization and did appearances together and there were never really issues,” Kelly said. “Matthew was like, ‘I don't know, I guess he doesn't like me.’”

She went on to say later ”I'm trying to give some grace here and not get very upset about the massive man threatening my husband. But at the same time, are you kidding? What are you doing? ... It's water under the bridge now, Matthew could care less.”

“But I just want to point out one thing: The best way to say ‘F you’ to someone without having to actually say it is to throw a dime right in their face at a zero all-out blitz right as he's coming for you. And you throw it right as he hits you and it hits Cooper [Kupp] right in the hands, and your kicker kicks a game-winning field goal.”

The Rams will face the 49ers on Sunday at 6:30 pm ET for the NFC championship.

The former Saints quarterback will leave his studio role with the network after just one season.
NEW ORLEANS, LA・1 DAY AGO
Sports Illustrated

The former New Orleans quarterback caused a stir when he tweeted, “I may play football again.”
NEW ORLEANS, LA・15 HOURS AGO
Sports Illustrated

The Lions receiver wore No. 18 to honor Megatron during rookie minicamp.
NFL・2 DAYS AGO

The team has reportedly had to settle multiple lawsuits and dealt with organizational turnover in the past year.
LAS VEGAS, NV・2 DAYS AGO
Sports Illustrated

The 36-year-old point guard was allegedly involved in a recent domestic dispute with the mother of his two children.
NBA・10 HOURS AGO
Sports Illustrated

The longtime college football commentator is preparing for his inaugural season calling NFL games on a regular basis.
NFL・2 DAYS AGO
Sports Illustrated

The league was thinking about filling the St. Louis void before the Rams officially relocated.
LOS ANGELES, CA・2 DAYS AGO

On Gronkowski’s 33rd birthday, his longtime quarterback hinted towards his impending decision as a free agent.
TAMPA, FL・2 DAYS AGO
Sports Illustrated

Reports surfaced on Sunday that the former Saints star was leaving his role as analyst for NBC after just one season.
NEW ORLEANS, LA・1 DAY AGO
Sports Illustrated

Green Bay’s star corner will now be with the franchise through 2026.
GREEN BAY, WI・18 HOURS AGO
Sports Illustrated

The 33-year-old spent time with the Chiefs and Steelers in 2021.
MIAMI, FL・1 DAY AGO
Sports Illustrated

Aidan Hutchinson Reminds Lions GM of Another No. 2 Pick

He had a direct comparison for the former Michigan defensive end.
NFL・2 DAYS AGO
Sports Illustrated

Marcus Smart Questionable for Game 1 of ECF With Foot Sprain

He’s third on the team in scoring during the playoffs.
BOSTON, MA・15 HOURS AGO
Sports Illustrated

Dallas’s owner had a clear message about the future of the Cowboys.
DALLAS, TX・17 HOURS AGO
Sports Illustrated

If you want a backup QB for your roster, these three offer good value.
NFL・17 HOURS AGO
Sports Illustrated

Antonio Brown Says He Wants to Retire With Steelers

He spent the first nine seasons of his career in Pittsburgh.
PITTSBURGH, PA・16 HOURS AGO
Sports Illustrated