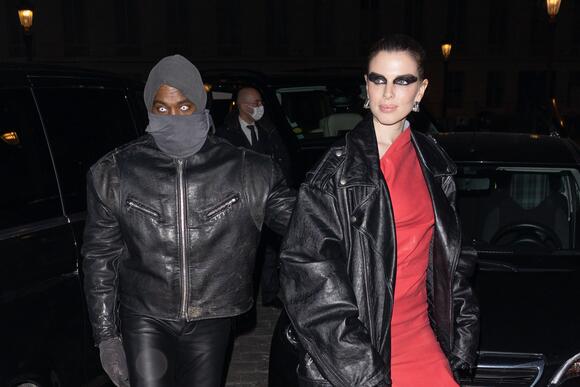 Julia Fox and the rap icon are the couple that just keeps on giving, especially when it comes to their latest looks at Paris Fashion Week . The two, now dubbed as “ Juliye ” by Fox, were spotted earlier this week at the Schiaparelli show wearing matching black leather outfits. Fox wore a patent mini dress from the designer , while West was dressed in a leather biker jacket, leather trousers, and a black mask covering his head. Perhaps Fox’s most dramatic accessory was her smokey eye makeup, which was done by none other than Ye.

In an Instagram story posted on Monday January 24, the Uncut Gems actress, 31, shared a photo of the rapper, 44, in which West appears to be doing her makeup. "Wanna know who my fave makeup artist is," Fox wrote on her story. Now, West can’t take all the credit for Fox’s winged look. Turns out, Fox’s makeup was applied by Daniel Kolaric using Pat McGrath products, the makeup artist posted to Instagram on Tuesday. Of course, West was on standby for touch ups. 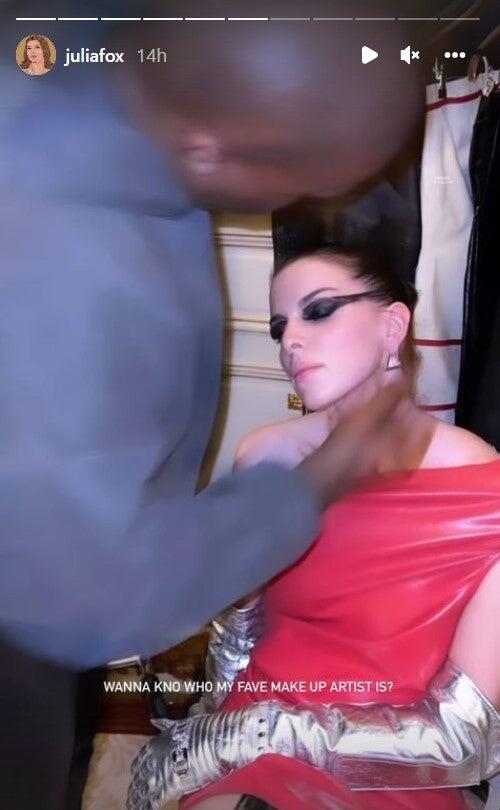 The couple has been turning lots of heads recently, and the Internet had a lot to say about the duo’s eye-catching creation. “Julia Fox and Kanye West look like they are about to fight the Power Rangers,” said one tweet.

Others put two and two together when they realized Ye did Fox’s makeup. “Not only did I predict that Julia Fox’s eye makeup was Kanye’s idea but he also did it himself,” a Twitter user said.

While Fox is certainly making a name for herself, she denies rumours that her relationship with West is a PR stunt. Talking about their relationship on her podcast Forbidden Fruits , Fox said: “There’s always people that think every single celebrity scandal is a setup. I personally don’t.” In another podcast episode, Fox rejected the claim that she’s dating West for money. “Honey, I’ve dated billionaires my entire adult life, let’s keep it real.”

Robin Roberts got emotional as she opened up about her relationship with partner Amber Laign, especially in the midst of a challenging health battle. The Good Morning America star made an appearance on The Ellen DeGeneres Show to promote her new book, Brighter By the Day. VIDEO: Robin Roberts enjoys...
CELEBRITIES・29 DAYS AGO
The Independent

The Kardashian-Jenner clan were in Italy this weekend to attend the nuptials of Kourtney Kardashian and Travis Barker, where the famous family rotated through a number of extravagant designer looks.However, it appears the dresses weren’t always easy to navigate Italy in, as Kylie Jenner at one point captured the moment her sister Kendall Jenner struggled to walk in the dress she wore for the wedding ceremony.In a clip shared to Kylie’s Instagram Stories on Sunday, Kendall, 26, who was wearing a Dolce & Gabbana champagne-coloured dress with a low back and floral detailing, could be seen wearing slide sandals...
CELEBRITIES・1 DAY AGO
HipHopDX.com

Too $hort has worked with a score of legendary producers throughout his almost 40-year career, from Jermaine Dupri and Lil Jon to Daz Dillinger and DJ Pooh. But one big-name beatsmith he passed up the opportunity to work with was Kanye West. During a recent interview with VladTV, the Bay...
CELEBRITIES・28 DAYS AGO
The Independent

Princess Eugenie has taken to her Instagram Stories to make an exciting announcement related to The Anti-Slavery Collective, which she co-founded with her best friend Julia de Boinville back in 2017. Resharing a message from the charity organisation, the mother-of-one revealed she was posting "news from my charity". WATCH: Princess...
CELEBRITIES・28 DAYS AGO
Insider

Netflix has canceled another one of its major shows, with this one getting the ax after only two seasons. Variety reports that hit sci-fi drama Raising Dion has been dropped by the streamer, following its recent season debut. The news seems to have been revealed by series star Sammi Haney, who shared the news with fans on Instagram. "Sad to say that Raising Dion is CANCELED [sic] Thank you for all of the amazing support we got from all of our wonderful fans!" Haney wrote, in part. "Season 2 was a success, equal to Season 1, even if just looking at how many people watched all of it and wanted a season 3!"
TV SERIES・27 DAYS AGO
ComicBook

After weeks of silence, Chris Rock has finally addressed his now-infamous incident with Will Smith at March's 94th Annual Academy Awards. During another sold-out show at Baltimore's Lyric Performing Arts Center on Friday, Rock directly referenced the slap, but only spent a second on it before moving on with his set.
BALTIMORE, MD・29 DAYS AGO

Kate Hudson has realized one of her dreams and has taken to Instagram to share the incredible news with her 15 million followers. Sharing two pictures of her looking casual in a pair of baggy dip-dyed trousers and a white tank top, and singing into a microphone, the actress announced a surprising career change.
CELEBRITIES・28 DAYS AGO
Popculture

One of the stars of This Is Us is on the move to a new network in advance of the show's series finale. Deadline reported in March that Chris Sullivan, who plays Toby on the NBC series, will headline a comedy pilot for ABC. His new show is set to be titled The Son In Law.
TV SERIES・27 DAYS AGO
Hello Magazine

Gwyneth Paltrow is a doting mom to two teenage children, Apple and Moses, who she shares with ex-husband Chris Martin. The family are notoriously private, but over the weekend the award-winning actress gave a rare insight into their upcoming plans - and how they are changing things up this year for Mother's Day.
FAMILY RELATIONSHIPS・28 DAYS AGO
PopCrush

Last month it was revealed that Sharon Osbourne would be returning to television, partnered with Piers Morgan on a new U.K. series named The Talk. This comes nearly a year after Osbourne was suspended and eventually exited the U.S. talk show The Talk after expressing her support for Morgan in an intense discussion over race with co-host Sheryl Underwood. Now, in a new interview with the U.K.'s Sunday Times, Osbourne reveals how cancel culture impacted her as she eventually parted ways with her longtime daytime talk series amidst public backlash.
CELEBRITIES・29 DAYS AGO

Mick Jagger has praised Machine Gun Kelly and Yungblud for making sure there is still "life in rock 'n' roll". In conversation with The Independent, The Rolling Stones frontman discussed the rock landscape in the modern era, expressing what he sees as a recent lack of young bands taking the genre forward and pointing to MGK and Yungblud as two artists finally bucking the trend.
MUSIC・29 DAYS AGO
Outsider.com

Sharon Osbourne opened up about everything from her family life to her health in a tell-all interview over the weekend. And during the chat, the TV favorite spoke out about her devastating battle with bulimia, which she has been living with for many years. Talking to The Times, she told...
CELEBRITIES・28 DAYS AGO
The Independent

A woman has revealed several “red flags” that she found in the apartment of the man she’s dating, which included two books about pregnancy and a woman’s ring.In a recent video shared to TikTok, Devin, @discoveringdevin, filmed herself sitting on a bed and putting her thumb down, as the text reads: “Red flags in his apartment.”She then began by showing four Apple MacBooks, all placed on top of each other, on a desk. “Four laptops…what are you hiding?” Devin wrote in the text over the clip.Next, she documented what appeared to be a “girl’s ring” on a white shelf....
RELATIONSHIP ADVICE・29 DAYS AGO
People

Paulina Gretzky walked down the aisle in Vera Wang!. The bride shimmered during her wedding with pro golfer Dustin Johnson on Saturday at Tennessee's Blackberry Farm. Gretzky showed off the stunning look on Instagram Monday in a photo of the newlyweds kissing. "4/23/22♥," she simply captioned the post. For...
BEAUTY & FASHION・27 DAYS AGO
Popculture

Spring is always a big time for engagements and weddings, and two beloved internet personalities are the latest to update their relationship status. On April 18, Rachel "Seltzer" Quirico revealed she and longtime boyfriend Trevor "TorcH" Housten were tying the knot after 17 years together. Both of them are beloved figures in the esports world, with Seltzer notably starring in the Syfy reality show WCG Ultimate Gamer. She's also hosted numerous esports tournaments and events for TV/streaming outlets; she also made a recent appearance on G4 TV's Boosted.
RELATIONSHIP ADVICE・28 DAYS AGO
PopCrush

90 Day Fiancé: Before the 90 Days star Johnny Chao is showing off a new look on social media. The reality TV star rocked a fresh-faced look on the show. However, Chao debuted some new facial hair in his most recent post on Instagram. More specifically, he grew a beard and mustache.
TV & VIDEOS・28 DAYS AGO
hotnewhiphop.com

Kim Kardashian's ex-husband, Damon Thomas, continues to "wish her the best," despite any false narratives about their past relationship. The 51-year-old sat down with DJ Vlad, looking back at his marriage with now-billionaire businesswoman Kim Kardashian in the early 2000s. He believes he's played a "part in their journey," however, he doesn't want to be known as "Kim Kardashian's husband" and wants to "get in control of [his] narrative," as many people fail to recognize he has won Grammys and even made it to the Oscars.
RELATIONSHIPS・28 DAYS AGO