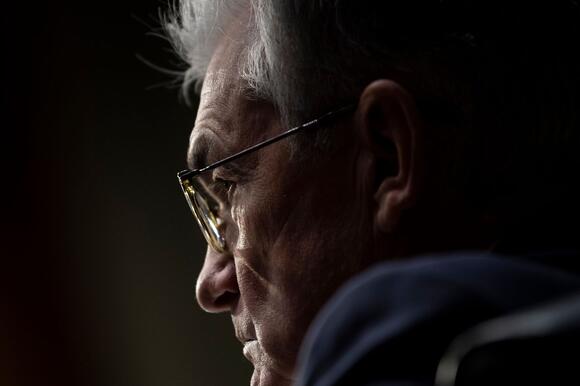 Stock-market bulls and bears are set to fight a “titanic battle” in the months ahead as the Federal Reserve prepares to lift interest rates, a top macro strategist warned late Tuesday.

The equity market, which has stumbled heavily to begin 2022, as Treasury yields rose and investors ramped up expectations for an aggressive series of rate increases and other measures by the Fed, will be “far from a one-way street,” wrote Deutsche Bank’s Alan Ruskin in a note.

To that end, he offered up a list of 11 arguments “that bulls and bear can use to counterpunch each other.” (See below.) 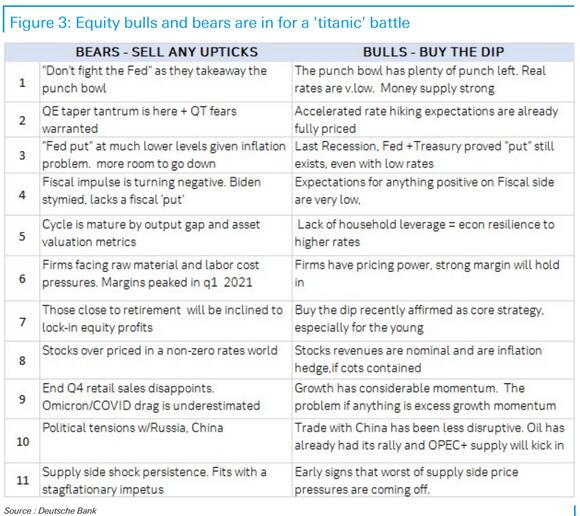 “As always it is how these factors are ranked and weighted in importance that counts. For example the idea that the Fed is taking away the punch bowl may be enough to trump most the other factors — although historically (and contrary to popular opinion) equities have generally done reasonably well when tightening is under way,” Ruskin wrote.

As noted by MarketWatch’s Mark DeCambre , data compiled by Dow Jones Market Data going back to 1989 shows the average return for the Dow Jones Industrial Average (DJIA) during hiking cycles is nearly 55%, while the S&P 500 (SPX) has seen an average rise of 62.9% and the Nasdaq Composite (COMP) has averaged a positive return of 102.7%.

The Fed, at the conclusion of its two-day meeting on Wednesday, issued a statement that laid the groundwork for a widely expected March rate increase. Stocks initially extended gains following the policy statement, then erased their advance during Federal Reserve Chairman Jerome Powell’s news conference, ending mostly lower .

Traders have priced in an aggressive round of rate hikes in 2022. Some have even penciled in the possibility of a 50 basis point, or 0.5 percentage point, rise in March rather than the more widely expected, and usual, 25-basis-point rise. Some market watchers contend that market participants have become overly aggressive on rate expectations, leaving room for a positive surprise if Powell doesn’t significantly enhance the central bank’s already hawkish posture.

Read: Stock-market selloff is so overdone, the bar is low for a positive Fed surprise, say JPMorgan analysts

Looking ahead, Ruskin said risky assets are likely to be resilient to 25 basis point rate increases at the March, May and June meetings, even if that pace isn’t fully priced into the market, “as long as the path of tightening does not acknowledge a still quicker and more extensive tightening cycle ahead.”

Need to Know: It’s Jerome Powell time — and one Wall Street bank warns the S&P 500 could fall another 20%. Goldman Sachs says the bull market will continue.

He noted that the market has only a little more than 50 basis points of hikes priced in for 2023, helping to keep expectations for the ceiling on the fed-funds rate, referred to as the terminal rate, below 2%.

Also see: How Jerome Powell may try to calm the market’s frazzled nerves

Despite the extensive losses seen for stock markets so far this year, it’s not over until it’s over — and investors should keep selling into any big rebounds higher. That’s the advice from a team of strategists at Bank of America, led by Michael Hartnett, in their Friday “Flow Show” note. In focus for the bank is increasing debate about whether the market has capitulated, which refers to investors basically giving up on trying to recapture lost gains.
STOCKS・5 HOURS AGO
MarketWatch

I am 33 years old, I currently make just over $120,000 a year, including an annual bonus, and my company has gifted me with around $300,000 in equity in the firm, although our stock is brand new, so it is constantly swinging up and down. I put around 6% toward a 401(k) and another 4% toward personal savings, investments and emergency cash.
STOCKS・2 DAYS AGO
WEKU

Stocks entered a bear market. Here's what that means

It's another brutal day on Wall Street as the U.S. stock market selloff has intensified. One of the broadest stock market indexes, the S&P 500, entered a bear market during Friday's trading. That means it had fallen a stunning 20% from a recent high in January. A bear market is...
STOCKS・17 MINUTES AGO

Sign up for the Fortune Features email list so you don’t miss our biggest features, exclusive interviews, and investigations. U.S. tariffs on Chinese imports survived a change in administration, but the trade-war-era levies may not survive record inflation. “We’re certainly looking at where we see costs being raised and,...
PRESIDENTIAL ELECTION・24 DAYS AGO
dailyhodl.com

Silk Road founder Ross Ulbricht is forfeiting billions of dollars worth of Bitcoin (BTC) and other crypto assets to the US government. According to a new court filing, Ulbricht will relinquish any claim to over 69,000 BTC and undisclosed amounts of Bitcoin Gold (BTG), Bitcoin SV (BSV) and Bitcoin Cash (BCH) worth a combined $3 billion as part of a settlement.
PUBLIC SAFETY・25 DAYS AGO
MarketWatch

Shares of Deere & Co. DE, -14.14% fell 1.8% toward a three-month low in premarket trading Friday, even after the agriculture, construction and forestry equipment maker reported fiscal second-quarter profit and revenue that rose above expectations, as "strong demand" helped offset supply-chain pressures. Net income increased to $2.10 billion, or $6.81 a share, from $1.79 billion, or $5.68 a share, in the year-ago period. The FactSet consensus for earnings per share was $6.69. Sales grew 10.9% to $13.37 billion, above the FactSet consensus of $13.23 billion. Cost of sales rose 12.5% to $8.92 billion, as gross margin contracted to 33.3% from 34.3%. Production & Precision Agriculture sales rose 13% to $5.1 billion, Small Agriculture & Turf sales increased 5% to $3.6 billion and Construction & Forestry sales rose 9% to $3.45 billion. The company affirmed the sales growth outlook for fiscal 2022. Deere's stock has gained 6.3% year to date through Thursday while the S&P 500.
STOCKS・8 HOURS AGO
MarketWatch

COLOMBO, Sri Lanka (AP) — Sri Lankan authorities on Friday closed schools and asked public officials not to come to work in a desperate move to prepare for an acute fuel shortage that is expected to last days amid the nation’s worst economic crisis in decades. The Public...
ASIA・13 HOURS AGO