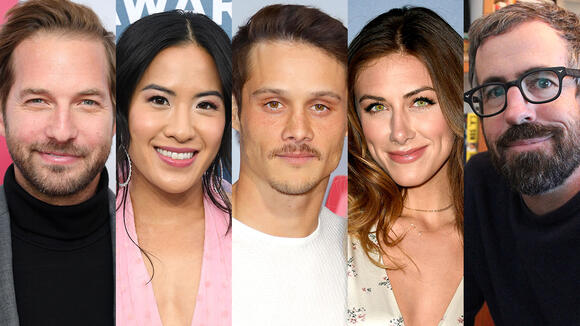 Veronica Mars ’ Ryan Hansen , The Kominsky Method ’s Melissa Tang, Timothy Granaderos of 13 Reasons Why, and Perry Mattfeld, the star of In the Dark , are toplining in Who Invited Them , an indie comedic horror from Duncan Birmingham.

The feature, which Birmingham wrote and is directing is being produced by Mary Pat Bentel ( This Close, Holly Slept Over ). Principal photography just wrapped production in Los Angeles.

Hansen and Tang play Adam and Margo, whose housewarming party is a success. However, one mysterious couple (Granaderos, Mattfeld) linger long after all the other guests have left. The uninvited couple reveals themselves to be Tom and Sasha, wealthy neighbors. But as a single nightcap leads to another, Adam and Margo start to suspect these new friends are actually duplicitous strangers.

Hansen, who gained fans for co-starring on Veronica Mars , next reprises his role from Party Down for the cult comedy’s revival on Starz. Tang was most recently in the Golden Globe-winning The Kominksy Method for Netflix.

Granaderos, one of the stars of Netflix’s 13 Reasons Why next stars in horror-comedy Untitled Horror Movie while Mattfeld will return for the fourth season of CW’s crime drama In the Dark .

Hansen, Tang, Granaderos are repped by Gersh while Mattfeld is repped by Innovative Artists.

The Wonder Twins have been deactivated. The DC-based feature project, which was to have begun production in early July, has been shelved, according to multiple sources.More from The Hollywood ReporterFrank Grillo Horror-Thriller 'Merciless' Among New Additions to Sentient's Cannes SlateChina Eyes "Restart" of International Cooperation Post-PandemicBuenos Aires Launches International Film Production Rebate The project was being developed as a feature for HBO Max and had Riverdale star KJ Apa and 1883 actress Isabel May on board to star. Adam Sztykiel, who worked on the script for Dwayne Johnson’s upcoming Black Adam, wrote the Wonder Twins script and was due to direct. Sources say...
MOVIES・1 DAY AGO
The Hollywood Reporter

Universal is taking a triple shot of Jason Momoa. The studio has picked up Shots! Shots! Shots!, an action-comedy from scribes Matt Mider and Kevin Burrows that has Momoa attached to star.More from The Hollywood ReporterJason Momoa Apologizes After Posting Photos at Sistine Chapel During Break From 'Fast X' ShootJason Momoa to Star in 'Minecraft' Movie for Warner Bros.Oscars: Jason Momoa, Serena and Venus Williams Added to Presenter Lineup Momoa will also produce the feature project with partner Jeff Fierson along with Dan Lin and Jonathan Eirich of Rideback, the banner behind the billion-dollar-grossing live-action Aladdin and Oscar-nominated drama The Two Popes. The story...
MOVIES・13 HOURS AGO
The Hollywood Reporter

Judging from some of the lyrics that fly from the Lyceum Theatre stage in the ultra-meta musical A Strange Loop, Pulitzer Prize-winning creator Michael R. Jackson has mixed feelings about Hollywood. Mogul Tyler Perry figures prominently in the story — not in a good way; he’s referred to as “toxic” and his content is lashed for perpetuating gay stereo­types — alongside mentions of #OscarsSoWhite, Scott Rudin (who is said to have “walls made of gold”), #MeToo and a cameo by the 12 Years a Slave best picture Oscar statuette. None of that prevented the show from being backed by a long...
MOVIES・1 DAY AGO
The Hollywood Reporter

Cannes Diary: Why Tom Cruise Is Our Biggest — and Most Elusive — Movie Star

When asked at Cannes on Wednesday, for the umpteenth time, why he insists on performing his own stunts despite the danger, Tom Cruise answered by referencing a screen legend from a bygone era. “No one asked Gene Kelly, ‘Why do you dance’?” Cruise said, at the tribute conversation moderated by French journalist Didier Allouch. “Why do you do your own dancing?’” Cruise likening himself to Kelly, one of the best athletes of Hollywood’s golden era, is a fair comparison. From the star sliding across the floor in his underwear at age 21 in 1983’s Risky Business to him buckling into jets...
MOVIES・19 HOURS AGO

Germany’s Studio 100 Film, Australia’s Pop Family Entertainment and Ireland’s Telegael are joining forces on the animated family comedy Being Betty Flood. A feature adaptation of the 13-book series The Floods from award-winning Australian author and illustrator Colin Thompson, Being Betty Flood follows Betty, a headstrong, smart 12-year-old music-loving girl who lives in a fantastic world where magic rules the land. She is torn between her over-protective mother and her desire to prove her musical abilities, in addition to just her magical ones.More from The Hollywood ReporterCannes: 'Game of Thrones' Actor Pilou Asbæk Stars in Danish WWII Drama 'Befrielsen'Paul Mescal on...
MOVIES・1 DAY AGO
Hello Magazine

Robin Roberts got emotional as she opened up about her relationship with partner Amber Laign, especially in the midst of a challenging health battle. The Good Morning America star made an appearance on The Ellen DeGeneres Show to promote her new book, Brighter By the Day. VIDEO: Robin Roberts enjoys...
CELEBRITIES・24 DAYS AGO
The US Sun

GENERAL Hospital revealed a major character change is coming to the show this week as one of its stars battles health issues. There are often comings and goings happenings on soaps, and the latest cast switch-up involves longtime cast member Nancy Lee Grahn. Nancy, who turns 66 on Thursday, has...
CELEBRITIES・24 DAYS AGO
SheKnows

Click here to read the full article. It seems like everyone was rooting for Renée Zellweger and Ant Anstead to get together, including an unexpected duo: the Property Brothers. Drew and Jonathan Scott recently revealed that they were the ones that ended up getting Zellweger and Anstead to meet, and subsequently fall in love. And their hard work ended up paying off! Back on April 14, 2022, the Scott brothers sat down with ExtraTV to talk about everything from Drew’s upcoming fatherhood to Jonathan loving GF Zooey Deschanel’s Vanity Fair gown. While we loved the entire interview, we’re losing it over...
CELEBRITIES・25 DAYS AGO

Kate Hudson has realized one of her dreams and has taken to Instagram to share the incredible news with her 15 million followers. Sharing two pictures of her looking casual in a pair of baggy dip-dyed trousers and a white tank top, and singing into a microphone, the actress announced a surprising career change.
CELEBRITIES・24 DAYS AGO
Insider

Depp said he discovered Disney would not recast him in "Pirates" days after Amber Heard's Washington Post op-ed article was published.
FAIRFAX, VA・24 DAYS AGO
People

Megan Fox wants her kids to express themselves however they please. In a wide-ranging interview with Glamour U.K. for their April cover story, the 35-year-old actress opens up about how she teaches her children, Journey River, 5, Bodhi Ransom, 8, and Noah Shannon, 9, about gender identity and encourages them to be confident in who they are.
FAMILY RELATIONSHIPS・23 DAYS AGO
hotnewhiphop.com

Flo Milli is setting some boundaries. The Alabama native is known for hits like "In The Party," "May I," and "Not Friendly," and while she loves to see fans in the audience having a good time and turning up at her shows, she's not impressed with watching them snort lines from up on stage.
CELEBRITIES・25 DAYS AGO

The show — and the vacation — must go on. Jada Pinkett Smith determined that the family trip to India wasn't going to be canceled due to Will Smith's Oscars slap. "Will and Jada have taken the family on [a] vacation that was already planned," a source exclusively tells Us Weekly. The Concussion star, 53, […]
CELEBRITIES・25 DAYS AGO
The Hollywood Reporter

Once again, Disney (DIS) - Get Walt Disney Company Report is finding itself embroiled in a political quagmire owing to its support of the LGBTQ community, after Florida Gov. Ron DeSantis punished Disney for denouncing his “Don’t Say Gay Bill,” by seeking to revoke Disney World’s designation as a special tax district (which as we pointed out, is ultimately a meaningless gesture).
FLORIDA STATE・23 DAYS AGO
Popculture

Spring is always a big time for engagements and weddings, and two beloved internet personalities are the latest to update their relationship status. On April 18, Rachel "Seltzer" Quirico revealed she and longtime boyfriend Trevor "TorcH" Housten were tying the knot after 17 years together. Both of them are beloved figures in the esports world, with Seltzer notably starring in the Syfy reality show WCG Ultimate Gamer. She's also hosted numerous esports tournaments and events for TV/streaming outlets; she also made a recent appearance on G4 TV's Boosted.
RELATIONSHIP ADVICE・24 DAYS AGO

90 Day Fiancé: Before the 90 Days star Johnny Chao is showing off a new look on social media. The reality TV star rocked a fresh-faced look on the show. However, Chao debuted some new facial hair in his most recent post on Instagram. More specifically, he grew a beard and mustache.
TV & VIDEOS・23 DAYS AGO
hotnewhiphop.com

Kim Kardashian's ex-husband, Damon Thomas, continues to "wish her the best," despite any false narratives about their past relationship. The 51-year-old sat down with DJ Vlad, looking back at his marriage with now-billionaire businesswoman Kim Kardashian in the early 2000s. He believes he's played a "part in their journey," however, he doesn't want to be known as "Kim Kardashian's husband" and wants to "get in control of [his] narrative," as many people fail to recognize he has won Grammys and even made it to the Oscars.
RELATIONSHIPS・23 DAYS AGO
Outsider.com

She’s definitely embracing the Hawaii lifestyle, and now “NCIS: Hawai’i” star Vanessa Lachey is showing off her everyday surrounding to her Instagram followers. “Hawai’i = Home,” Vanessa Lachey declares in her latest social media post. The “NCIS: Hawai’i” star also shares a snapshot of her sitting in a breathtaking area in Hawaii.
HAWAII STATE・23 DAYS AGO
The Hollywood Reporter

Elon Musk’s $44 billion deal to acquire Twitter “cannot move forward” without “proof” for a fake accounts estimate previously disclosed by the social media giant, the Tesla and SpaceX boss tweeted on Tuesday. Last week, he had said the mega-transaction was “temporarily on hold pending details supporting calculation that spam/fake accounts do indeed represent less than 5% of users.” That comment came after a Twitter regulatory filing with the Securities and Exchange Commission (SEC), in which the firm estimated how many of its “monetizable daily active users” were false or spam accounts. Twitter reported 229 million users who were served advertising...
BUSINESS・2 DAYS AGO