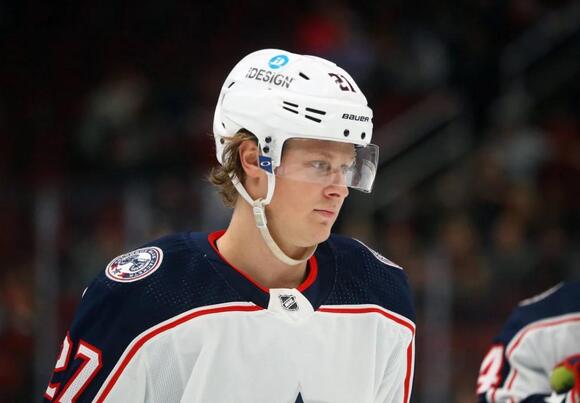 Boqvist, who has missed the past three games, is expected to be in the lineup Wednesday night when the Blue Jackets host the Calgary Flames.

Boqvist, 21, has recorded seven goals and seven assists in 26 games in his first season with Columbus.

The Swede has 43 points (13 goals, 30 assists) in 102 games with the Blackhawks and Blue Jackets since Chicago drafted him eighth overall in 2018.

Nothing gets the people going quite like the Stanley Cup Playoffs. Find out how to live stream every NHL Playoff game here.
NHL・20 HOURS AGO
Sportsnaut

Mystics look for revenge in early rematch vs. Wings

The Washington Mystics and Dallas Wings will already have a second matchup in this young season when they face each
ARLINGTON, TX・11 HOURS AGO
Sportsnaut

They posted the best records in their respective conferences during the regular season. With one round now complete in the
SUNRISE, FL・9 HOURS AGO
Sportsnaut

Bookmark. Save. Favorite. Do your thing. This is the one-stop-shop for everything NBA schedule-related heading into the 2021-22 season: Related:
1 HOUR AGO
Sportsnaut

Having played in just five games this postseason due to a nagging hamstring injury, Kyle Lowry was questionable heading into
MIAMI, FL・11 HOURS AGO
Sportsnaut

The Miami Heat on Monday listed guard Kyle Lowry as out for Tuesday’s Game 1 of the Eastern Conference finals
BOSTON, MA・12 HOURS AGO
Sportsnaut

The Toronto Blue Jays will try to end a stretch of four consecutive series losses Tuesday night when they start
SEATTLE, WA・4 HOURS AGO

The Detroit Lions are in a huge rebuild, but how many games on their 2021 schedule are realistically winnable? Check out our projected record for the Lions.
DETROIT, MI・4 HOURS AGO
Sportsnaut

Five-star Oregon commit Marquis “Mookie” Cook, one of the top prospects in the Class of 2023, will star as a
NBA・11 HOURS AGO
Sportsnaut

The NBA salary cap for the 2022-23 season has reportedly been set at $122 million. According to Shams Charania of
NBA・13 HOURS AGO
Sportsnaut

The Milwaukee Bucks are said to be pessimistic about a potential Game 7 return for All-Star Khris Middleton. Middleton, sidelined
MILWAUKEE, WI・2 DAYS AGO
Sportsnaut

The Miami Heat will begin pursuit of further Eastern Conference finals success when they host the Boston Celtics on Tuesday
BOSTON, MA・12 HOURS AGO
Sportsnaut

Bucks, Celtics move on to an emotional Game 7

While the city of Milwaukee works through the aftermath of separate downtown shootings following Game 6 of the Eastern Conference
MILWAUKEE, WI・2 DAYS AGO
Sportsnaut