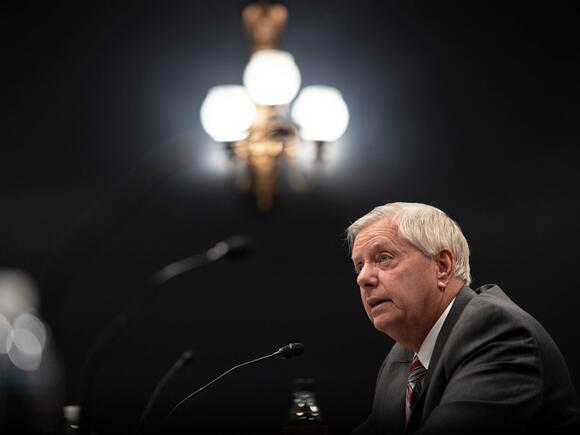 Following reports that liberal Supreme Court Justice Stephen Breyer will retire at the end of this term , Republican Sen. Lindsey Graham of South Carolina said Democrats would likely be able to confirm his replacement without any Republican support, noting that "elections have consequences."

"Justice Breyer has always shown great respect for the institution and his colleagues, and I wish him well in the next phase of his life," said Graham in a statement, adding that he appreciates Breyer's service while describing him as "a scholar and a gentleman."

Graham noted that it's possible for Biden's nominee to be confirmed without the need for any Republican votes. Vice President Kamala Harris can cast a tiebreaking vote, granting Senate Democrats narrow control of the evenly-divided upper chamber.

"As to his replacement: If all Democrats hang together – which I expect they will – they have the power to replace Justice Breyer in 2022 without one Republican vote in support. Elections have consequences, and that is most evident when it comes to fulfilling vacancies on the Supreme Court," he added. Graham's statement is notable, given his close relationship with former President Donald Trump.

While Sen. Joe Manchin of West Virginia was the only Democrat to vote for Kavanaugh, Gorsuch received three Democratic votes, including from Manchin and former Sens. Joe Donnelly of Indiana and Heidi Heitkamp of North Dakota. Barrett received no Democratic votes.

If Democrats are able to retain the support of the more moderate members of their caucus — particularly Manchin and Sen. Kyrsten Sinema of Arizona — then they will indeed not need any Republican votes to confirm Biden's nominee.

Biden promised to nominate a Black woman to the Supreme Court. I'm a person of color, but I'd much have a person, regardless of the color of their skin, who will be a constitutionalest and uphold our laws as they are written.

Trump gave Lindsey Graham permission to talk Lindsey words do not mean anything to anybody. He said Trump racism makes sense. He probably need to go and look for his spine.

Good job, THERE SHOULD BE MORE Democrats and or Liberals on the Supreme Court. McConnell showed his true colors. Vote Republicans out of office.

Greene testified on Friday that she didn't recall whether she asked Trump to invoke military rule, despite telling Meadows to relay the idea to Trump.
ATLANTA, GA・28 DAYS AGO
WashingtonExaminer

When President Joe Biden named Kamala Harris as his running mate, he promised his former campaign rival would be one of the most influential voices in the White House.
PRESIDENTIAL ELECTION・28 DAYS AGO
USA TODAY

The Centers for Disease Control and Protection announced in April that the Title 42 would be rescinded on May 23.
LOUISIANA STATE・28 DAYS AGO
AOL Corp

Former President Donald Trump worked his Pennsylvania primary endorsements to make him look like a winner, but exasperated Republicans in the state say the end result could boomerang in ways that damage both the party and Trump's own chances should he run for president in 2024. “This is the most...
GEORGIA STATE・4 DAYS AGO

EXCLUSIVE: A group of Republican senators is introducing legislation to block the Biden administration from sending personnel and funding from the Department of Veterans Affairs (VA) to alleviate the crisis at the southern border. The senators are alarmed by the Biden administration's announced termination of Title 42 on May 23,...
CONGRESS & COURTS・27 DAYS AGO
Business Insider

"Madison had some issues that came out," McDaniel said on Sunday. "He was a rising star in our party and we need to make sure we retain that seat."
CONGRESS & COURTS・1 DAY AGO
Business Insider

Harvard polled Americans under 30 who are likely to vote in the midterms and found 85% of them want some government action on student loan debt.
PRESIDENTIAL ELECTION・28 DAYS AGO

MEXICO CITY — Mexican President Andrés Manuel López Obrador on Monday urged U.S. Latinos not to vote in November’s midterm elections for politicians who have “mistreated” them, in response to a comment by former U.S. President Donald Trump. Trump boasted at a rally in...
PRESIDENTIAL ELECTION・27 DAYS AGO
Business Insider

The former president referenced scoring well on a cognitive test in 2018, which is designed to detect whether a person has early stages of dementia.
DELAWARE COUNTY, OH・29 DAYS AGO
Business Insider

MAGA world would rather sit out the Georgia governor's race in November than vote for the incumbent who certified President Joe Biden's 2020 win.
GEORGIA STATE・2 DAYS AGO

Former Trump lawyer Michael Cohen threw his former boss under the bus on Monday, appearing to contradict claims that the former president does not possess the documents New York Attorney General Letitia James is after.
POTUS・27 DAYS AGO
Business Insider

"In retrospect, it's hard to understand David's campaign, and it's certainly not the campaign those of us who were for him expected," Gingrich told The New York Times of Perdue's race.
GEORGIA STATE・10 HOURS AGO
Business Insider

When the US government seized $337,000 from Alexander Leszczynski, he produced "a fabricated pardon purportedly signed" by Trump, the Justice Department said.
FLORIDA STATE・2 DAYS AGO

"It's like the disinformation board on steroids. Another way to look at is the Patriot Act for American citizens," Sen. Josh Hawley said.
BUFFALO, NY・1 DAY AGO
Business Insider

Sign up for the Fortune Features email list so you don’t miss our biggest features, exclusive interviews, and investigations. Reports that Twitter’s board could come to a deal with Elon Musk as early as Monday are raising red flags among media watchdog groups. On Monday, Media Matters, a...
PRESIDENTIAL ELECTION・28 DAYS AGO
Business Insider