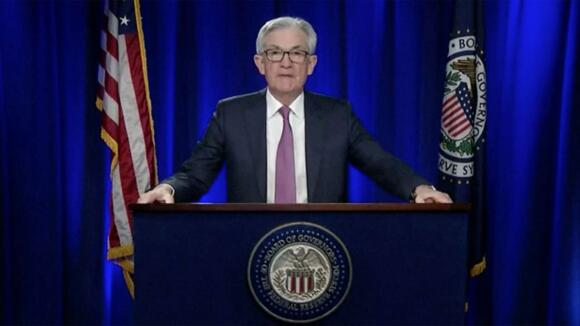 Officials at the Federal Reserve on Wednesday signaled that they could "soon" raise interest rates for the first time in three years, as inflation concerns cast a shadow over the pandemic-battered economy.

The central bankers said in a statement Wednesday that they were leaving rates unchanged for now, at near-zero levels, but with a recovering labor market and the threat of inflation, this will likely change in the near future.

"With inflation well above 2 percent and a strong labor market, the Committee expects it will soon be appropriate to raise the target range for the federal funds rate," the Fed said in a statement Wednesday.

Federal Reserve Chair Jerome Powell said during his closely watched news conference Wednesday that the Fed's "policy has been adapting to the evolving economic environment and will continue to do so," alluding to the backdrop of elevated inflation and labor market gains.

"Economic activity expanded at a robust pace last year, reflecting progress on vaccinations and the reopening of the economy," Powell said. "Indeed, the economy has shown great strength and resilience in the face of the ongoing pandemic."

Powell said the sharp rise in COVID-19 cases associated with the omicron variant likely will weigh on economic growth in the short term, but he expressed hope, as health experts have suggested, that the omicron variant hasn't been as virulent as previous strains, and that it's expected for cases to drop off more rapidly.

Powell added that "inflation remains well above our longer run goal of 2%," which it notably has for some time now. He attributed this largely to supply and demand imbalances related to the pandemic and the reopening of the economy.

"These problems have been larger and longer lasting than anticipated, exacerbated by waves of the virus," Powell said Wednesday. "While the drivers of higher inflation have been predominantly connected to the dislocations caused by the pandemic, price increases have now spread to a broader range of goods and services. Wages have also risen briskly, and we are attentive to the risks that persistent real wage growth in excess of productivity could put upward pressure on inflation."

The Fed chair said that they expect inflation to decline over the course of the year, but signaled that the central bankers are taking this issue seriously -- they're very aware of the pain it causes for consumers and will be "watching carefully" to see how the economy evolves.

"We understand that high inflation imposes significant hardship, especially on those least able to meet the higher costs of essentials like food, housing and transportation," Powell added. "In addition, we believe that the best thing we can do to support continued labor market gains is to promote a long expansion and that will require price stability. We're committed to our price stability goal."

Powell continued: "We will use our tools both to support the economy and a strong labor market, and to prevent higher inflation from becoming entrenched."

U.S. markets tumbled after the Fed announcement. The Dow Jones Industrial Average reversed earlier gains, losing 131 points, or about 0.38%. The S&P 500 shed 0.15%, and the Nasdaq was little changed, gaining 0.02% on the day after being up by more than 3%.

"It certainly looks like there's a correction underway -- who knows if it's going to be a short-term correction or a longer-term correction," Chris Campbell, chief strategist at the Kroll and former staff director of the Senate Finance Committee, told ABC News on Wednesday, discussing market reactions to the Fed's announcement.

"Inflation is here to stay," he added. "People who've been in markets a long time know that the whatever the Fed's going to do could have a negative impact on the markets" -- raising interest rates or tapering pandemic-era policies.

The Fed officials reiterated in their Wednesday statement that they expect to continue to taper their pandemic-era asset purchasing program meant to buoy the economy during the health crisis and end it completely by early March.

MORE: Treasury Secretary says US economy 'has never worked fairly for Black Americans' or 'for any American of color'

Overall, Campbell suggested market players should brace themselves for a bumpy ride ahead.

"I often point out that the average retail investor today has never really been in the public markets at a time when you've had hyperinflation or a Federal Reserve that's bent on getting that inflation under control," Campbell added. "So it's going to be really interesting to see, but I think it's going to be a very bumpy and lumpy year both in the markets and the economy."

Separately, the Fed officials noted in their latest policy statement that indicators of economic activity and employment have continued to strengthen.

Still, the central bankers noted that supply and demand imbalances related to the pandemic and reopening of the economy "have continued to contribute to elevated levels of inflation," and that much of the economic recovery still remains at the mercy of the virus.

The unemployment rate as of last month fell to 3.9% , only slightly above the pre-pandemic rate of 3.5% in February 2020.

Soaring inflation, however, has thrown a new wrench into the economic recovery. Government data released earlier this month indicated that consumer prices have jumped 7% over the last 12 months , the largest one-year increase since 1982.

As for how inflation, and the Fed's efforts to combat it, would impact everyday Americans, Campbell echoed Powell's sentiments in saying low-income workers would be hit hardest.

"Inflation is a what I call 'a regressionary tax' -- that means that it's really felt most by those who can afford it least," Campbell told ABC News. Even a $1 increase in gas prices "can really be significant in their ability to be able to go to work or put food in their kids' mouths or clothes on their backs."

At the same time, Fed policies to ameliorate inflation -- such as raising interest rates -- also hits this group harder.

"The same people will feel that challenge, maybe in different ways, as the Federal Reserve raises interest rates, and revolving lines of credit will become more expensive -- those who are living on credit or credit cards, those will become more expensive," Campbell explained. "Homes become unaffordable for most Americans, and so it really puts pressure on the lower end of the economic scale."

Campbell expressed hope that Powell and policymakers will do their best to ease this burden as they use their tools to to stamp out inflation, but added that "there is no way to do it painlessly" and raising interest rates is "going to have some negative effect on the economy and on everyday Americans."

Sign up for the Fortune Features email list so you don’t miss our biggest features, exclusive interviews, and investigations. U.S. tariffs on Chinese imports survived a change in administration, but the trade-war-era levies may not survive record inflation. “We’re certainly looking at where we see costs being raised and,...
PRESIDENTIAL ELECTION・29 DAYS AGO
WashingtonExaminer

When President Joe Biden named Kamala Harris as his running mate, he promised his former campaign rival would be one of the most influential voices in the White House.
PRESIDENTIAL ELECTION・29 DAYS AGO
MSNBC

A new Republican-backed law in Florida will repeal Disney’s special tax status, resulting in a property tax increase of up to 25% for residents of Orange County. MSNBC’s Lawrence O’Donnell explains how the move comes as GOP retribution for Disney’s opposition to Florida’s “Don’t Say Gay” bill.April 26, 2022.
FLORIDA STATE・29 DAYS AGO
The US Sun

Greene testified on Friday that she didn't recall whether she asked Trump to invoke military rule, despite telling Meadows to relay the idea to Trump.
ATLANTA, GA・29 DAYS AGO
dailyhodl.com

May is almost here, and millions of households are looking forward to their next SNAP payments. See: Surprising Things You Can Buy With Food StampsFind: SNAP 2022 -- Is My State Giving Out Extra Money...
AGRICULTURE・4 DAYS AGO
NBC News

MEXICO CITY — Mexican President Andrés Manuel López Obrador on Monday urged U.S. Latinos not to vote in November’s midterm elections for politicians who have “mistreated” them, in response to a comment by former U.S. President Donald Trump. Trump boasted at a rally in...
PRESIDENTIAL ELECTION・29 DAYS AGO
WashingtonExaminer

WASHINGTON (Reuters) - The United States on Tuesday offered a reward of up to $10 million for information on six people it described as Russian military intelligence officers who had conducted cyber attacks affecting critical U.S. infrastructure. The six officers work in a cyber-focused unit of Russia's Main Intelligence Directorate...
PUBLIC SAFETY・28 DAYS AGO

Economist David Rosenberg predicts the S&P 500 will crash a further 17%, and says we're currently 'reliving the summer of 2008'

"The past two years represented a fake bull market built on sand, not concrete," the founder of Rosenberg Research said in an op-ed on Monday.
STOCKS・1 DAY AGO