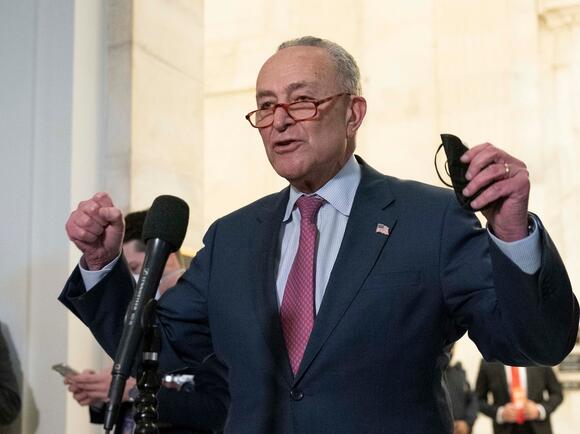 Senate Majority Leader Chuck Schumer on Wednesday announced that the Senate will move quickly to confirm a Supreme Court nominee to the bench after news of Justice Stephen Breyer's forthcoming retirement broke.

"President Biden's Supreme Court nominee will receive a prompt hearing in the Senate Judiciary Committee and be considered and confirmed by the full United States Senate with all deliberate speed," Schumer said in a statement .

Breyer is set to step down from the bench at the end of the court's term this summer, according to multiple news outlets. The White House and the liberal justice are expected to formally announce his retirement as early as Thursday.

Breyer's retirement clears the way for President Joe Biden to appoint his replacement. The news comes after progressives launched a months-long public campaign demanding that Breyer step down while the Senate is still under Democratic control. On the 2020 campaign trail, Biden vowed to put the first Black woman on the nation's highest court.

A new Democratic-appointed justice would not change the Supreme Court's 6-3 conservative majority, but would keep that balance in place.

Biden reacted to the news on Wednesday, saying that "there has been no announcement from Justice Breyer" and to "let him make whatever statement he's going to make."

"I'll be happy to talk about it later," the president added.

"His work and his decisions as an Associate Justice on the biggest issues of our time — including voting rights, the environment, women's reproductive freedom, and most recently, health care and the Affordable Care Act — were hugely consequential," Schumer continued. "America owes Justice Breyer an enormous debt of gratitude."

their enthusiasm is beyond measure. After putting the last 2 Judges thru total smear campaigns it's turning my stomach. Totalitarian control is their only aim

more bad decisions by the Demorats. put apperson cause of their color not cause they a qualified. Clamidia Hyena Harris is the best example

Schumer just kill over with a heart attack you are one disturbed man , actually you act like a animal, you make this world worse go Away and have a heart attack

Republicans haven't said what kinds of abortion restrictions they would back if they took control of Congress in November.
FLORIDA STATE・3 DAYS AGO
Business Insider

If Democrats fail to resurrect Biden's agenda, millions could see their healthcare premiums sharply rise a week before the midterm elections.
U.S. POLITICS・1 DAY AGO
Newsweek

"This should never have been allowed to occur to my colleague," Representative Matt Gaetz said about the legal challenge seeking to disqualify Greene.
GEORGIA STATE・29 DAYS AGO

CNN — Sarah Huckabee Sanders will win the GOP nomination for governor of Arkansas, CNN projects, putting her in strong position to win the governorship in this red state in November. The 39-year-old former Trump White House press secretary enjoyed the support of former President Donald Trump and easily...
ARKANSAS STATE・12 HOURS AGO
Newsweek

The poll also found that 44% of Republic voters want congressional candidates to focus on the 2020 presidential election.
PRESIDENTIAL ELECTION・19 HOURS AGO
Business Insider

In the latest set of text messages between the Fox News host and Trump's former chief of staff, Meadows told Hannity to "Stress every vote matters."
PRESIDENTIAL ELECTION・29 DAYS AGO
americanmilitarynews.com

The Utah senator also said the West could confront Russian-allied nations with an ultimatum: "You are either with us, or you are with Russia."
CONGRESS & COURTS・2 DAYS AGO

If Roe v. Wade is tossed it would mark the first time the Supreme Court overturned precedent 'to limit civil rights, not expand them,' expert says

"Instead of using the Constitution to expand rights" overturning Roe v. Wade would limit the rights of Americans, an expert told Insider.
CONGRESS & COURTS・2 DAYS AGO
Fox News