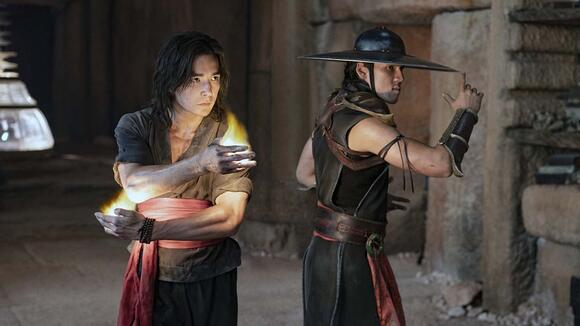 New Line is ready for round two of Moral Kombat . The studio has hired screenwriter Jeremy Slater to pen a sequel to the 2021 video game adaptation, The Hollywood Reporter has confirmed.

Mortal Kombat debuted simultaneously in theaters and on HBO Max in the midst of the coronavirus pandemic in April 2021 and earned $83.7 million globally. According to HBO Max, which does not release viewership data publicly, it has been among the streaming service’s top feature films.

No director or cast is attached, but the first installment teased the addition of fan favorite character Johnny Cage, who did not appear. Said McQuoid last year : “We knew we needed to lay a little bit of rail toward him. We never talked about sequels. We don’t presume anything like that. It’s very one step at a time. But we did feel that we needed to lay a few joiners, his being one of them.”

Slater is riding high, with the trailer for his upcoming Disney+ show, Moon Knight , generating buzz upon release last week. The series stars Oscar Isaac as the Marvel antihero and is due out in March. He’s also known for his work on Netflix’s The Umbrella Academy. The new Mortal Kombat film continues Slater’s relationship with James Wan, who produced the recent Mortal Kombat via his Atomic Monster banner. Wan is also producing Slater’s upcoming directorial debut, Thread, for Screen Gems. Slater’s other work includes an upcoming adaptation of Stephen King’s The Tommyknockers for Universal and Wan. He most recently worked on Uprising, the Netflix film which has Travis Knight attached to direct.

Slater is repped by UTA, Kaplan/Perrone Entertainment and McKuin Frankel.

David Cronenberg on U.S. Politics: Canadians “Think Everybody in the U.S. Is Completely Insane”

“I hope to commit a few more cinematic crimes before I’m finished,” said David Cronenberg, unveiling his return to Cannes with Crimes of the Future, the competition title that premiered at the film festival on Monday. Despite, in his own words, being “older than the Cannes film festival” (Cronenberg is 77, Cannes celebrates its 75th anniversary this year), the Canadian auteur was in fine form at the Crimes press conference Tuesday, delighting the pack of international journalists with his self-deprecating wit and occasional insights into his body of work. At one point, after one reporter’s long-winded question, the director quipped: “That...
CELEBRITIES・1 DAY AGO
The Hollywood Reporter

Chris Hemsworth recently promised fans that the new trailer for Thor: Love and Thunder “is gonna blow your mind,” and now they can judge for themselves, with the new look debuting during Monday’s NBA playoff game on ABC. Within an hour of dropping, the trailer had more than two million views on the Marvel Entertainment YouTube page alone.More from The Hollywood Reporter'She-Hulk: Attorney at Law' Trailer Smashes 78M Views in 24 HoursFantastic Four: A Complicated Cinematic Flashback -- And Why Fans Are Elated for Group's Future Following 'Doctor Strange 2'The Likely Explanation for 'Doctor Strange 2' PG-13 Rating Amid Content Debate Marvel...
MOVIES・1 DAY AGO
Collider

One of the most intriguing films coming out in 2023 is Warner Brothers’ Barbie starring Margot Robbie, directed by Greta Gerwig. There has been so much casting news over the last couple of months, but now we have our first official picture of Robbie in costume and a confirmed release date. Barbie will be released on July 21, 2023.
MOVIES・28 DAYS AGO

David Cronenberg and the stars of his latest movie, Crimes of the Future, got to bask in the glory of an extended Cannes Film Festival standing ovation. The director and members of the cast, which includes Viggo Mortensen, Léa Seydoux and Kristen Stewart, were showered in 6 minutes of applause after the film screened at the Palais late Monday evening.More from The Hollywood ReporterRob Reiner Reacts to Being on Russia's Ban ListCannes Hidden Gem: Unsettling Rocks and Cornish Creeps in Mark Jenkin's 'Enys Men'David Cronenberg on U.S. Politics: Canadians "Think Everybody in the U.S. Is Completely Insane" “I’m speechless, really,” said the...
MOVIES・1 DAY AGO
Popculture

Netflix has canceled another one of its major shows, with this one getting the ax after only two seasons. Variety reports that hit sci-fi drama Raising Dion has been dropped by the streamer, following its recent season debut. The news seems to have been revealed by series star Sammi Haney, who shared the news with fans on Instagram. "Sad to say that Raising Dion is CANCELED [sic] Thank you for all of the amazing support we got from all of our wonderful fans!" Haney wrote, in part. "Season 2 was a success, equal to Season 1, even if just looking at how many people watched all of it and wanted a season 3!"
TV SERIES・28 DAYS AGO
Insider

Ryan Reynolds accidentally gave Denzel Washington two black eyes during the filming of "Safe House." He said he was extremely embarrassed.
CELEBRITIES・1 DAY AGO
The Independent

Depp said he discovered Disney would not recast him in "Pirates" days after Amber Heard's Washington Post op-ed article was published.
FAIRFAX, VA・29 DAYS AGO
The Hollywood Reporter

With Snap surprising Wall Street with a second-quarter revenue warning on Monday, noting that “the macroeconomic environment has deteriorated further and faster than anticipated” since its last earnings update, some media analysts are assessing the potential advertising impact on other sector players. Wells Fargo’s Steven Cahall in a Tuesday report offered up “helpful quick data points as investors look to react to a fast-changing environment.” He started by summarizing “what we learned in the 2020 ad recession,” explaining: “During the early days of COVID-19, digital ad spend snapped (no pun intended) down quickest, with local TV and radio following shortly after....
MARKETS・1 DAY AGO
The Hollywood Reporter

Sony label Stage 6 Films has taken international rights, barring a few territories, on Wild Four O’Clocks, the upcoming feature starring Michelle Pfeiffer and the directorial debut of screenwriter Peter Craig, who recently penned The Batman alongside Matt Reeves and worked on Top Gun: Maverick. Protagonist Pictures has now sold out all international territories on the film, with VVS Films for Canada, Paradiso Films for Benelux and Eagle Pictures for Italy also acquiring the title.More from The Hollywood ReporterGeorge Miller on How Filmmaking Is Like Playing in the NBA: "You Constantly Have to Adjust"'Nostalgia': Film Review | Cannes 2022The Dardennes' 'Tori...
MOVIES・22 HOURS AGO

Stylist Tara Swennen has one mission when collaborating with longtime client Kristen Stewart: “Make sure she’s comfortable and feels authentically herself.” The two have put that aesthetic on display during the Cannes Film Festival for years now by turning out a slew of chic ensembles almost unanimously in Chanel, the luxury house for which Stewart has been a beloved muse and ambassador. Ahead of her anticipated return to the Palais this year (for David Cronenberg’s body horror film Crimes of the Future and Olivier Assayas’ TV series Irma Vep), THR caught up with Swennen to get the scoop behind some of...
DESIGNERS & COLLECTIONS・3 DAYS AGO
The Hollywood Reporter

Laurence Fishburne and Clifton Collins Jr. are set to star in Frank & Louis, a prison drama to be directed by Petra Volpe for Participant, Zodiac Pictures and Tyler Perry’s Peachtree & Vine Productions. The feature portrays a man serving a life sentence who takes an in-prison job caring for aging and infirm prisoners suffering from memory loss diseases. What starts as a self-serving mission for parole turns into a deep emotional and transformative relationship, offering a glimmer of redemption in an otherwise unforgiving prison.More from The Hollywood ReporterCannes First Look: Casey Affleck, Laurence Fishburne in Sci-Fi Thriller 'Slingshot' (Exclusive)Tribeca Festival...
LOS ANGELES, CA・1 DAY AGO
The Hollywood Reporter

If you purchase an independently reviewed product or service through a link on our website, The Hollywood Reporter may receive an affiliate commission. You don’t have to wait until Memorial Day to take advantage of stellar sales. Although the holiday officially takes place on Monday, May 30, retailers are already rolling out deals on everything from mattresses and home goods to past-season luxury designer pieces that are still very much wearable through summer and beyond.More from The Hollywood ReporterYouTube CEO Says Platform Preparing for Abortion MisinformationJen Psaki Joining MSNBC This Fall, Developing Streaming Show'Better Call Saul' Writer-Director on the Midseason Finale's...
SHOPPING・1 DAY AGO
The Hollywood Reporter

Sam Raimi’s Doctor Strange in the Multiverse of Madness has raced past the $800 million mark at the global box office in a notable feat. The Marvel and Disney tentpole finished Sunday with $803.2 million in worldwide ticket sales to rank as the No. 2 Hollywood film of the pandemic era behind Spider-Man: No Way Home ($1.89 billion) after passing up James Bond pic No Time to Die ($774.2 million) and The Batman ($768.5 million). The only other film to cross $700 million globally during the COVID era has been F9: The Fast Saga, although that film was released earlier in...
MOVIES・2 DAYS AGO
The Hollywood Reporter

The cinematic equivalent of a dark, morbidly hilarious graphic novel, Funny Pages, which premieres in the Directors’ Fortnight in Cannes, marks a fresh and uncompromising feature debut for The Squid and the Whale star turned director Owen Kline. Produced by A24 and the Safdie brothers, this New Jersey-set coming-of-age comedy very much bears the mark of the latter’s grungy, bitterly funny films, with a cast of freakish side characters and unforgettable faces that you rarely see on the big screen. But it also channels the work of artists like Robert Crumb, Daniel Clowes and Peter Bagge, chronicling the real-life foibles of...
MOVIES・1 DAY AGO
The Hollywood Reporter

New Zealand Leader Jacinda Ardern Talks Gun Control on ‘Late Show’: “We Saw Something That Wasn’t Right and We Acted on It”

New Zealand Prime Minister Jacinda Ardern addressed Tuesday’s deadly mass shooting at a school in Uvalde, Texas, offering insight on how her country responded with a stricter gun control law in the wake of the 2019 Christchurch mosque massacre when a gunman murdered 51 people. Appearing as a guest on Tuesday’s episode of The Late Show, Ardern was asked about the Robb Elementary School shooting by host Stephen Colbert which had occurred earlier on Tuesday and so far has led to the deaths of 19 schoolchildren and two adults in what has become the deadliest school shooting since the 2012 Sandy...
UVALDE, TX・5 HOURS AGO
The Hollywood Reporter

Léa Seydoux is pulling double duty at the Cannes Film Festival, with Mia Hansen-Love‘s One Fine Morning and David Cronenberg‘s Crimes of the Future both premiering at the French fest. In the middle of this, Seydoux sat down with The Hollywood Reporter‘s Scott Feinberg for a live episode of his Awards Chatter podcast, co-presented byTHR and SAG-AFTRA in association with OuterInsight. The podcast was recorded at the Campari Lounge at the Palais, overlooking the Croisette, which was bustling on a Sunday morning. The lounge sits next to the Palais, where Seydoux will on Monday attend the premiere of Cronenberg’s first film...
MOVIES・2 DAYS AGO