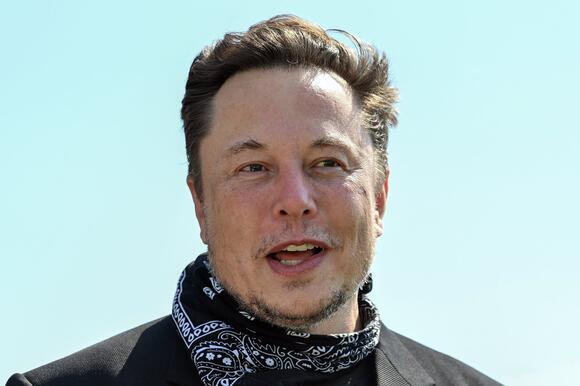 Elon Musk and a McDonald’s Happy Meal — the collab we never saw coming and didn't know we needed.

The Twitter-fiending billionaire took to the social media app on Tuesday to propose that the fast-food chain should start accepting his favorite meme cryptocurrency, Dogecoin.

“I will eat a happy meal on tv if @McDonalds accepts Dogecoin,” he simply stated.

Musk’s Tweet received more than 378,000 likes and 54,600 retweets, but it was in the comment section where things were really shaken up.

First was the response from McDonald’s rival, Burger King , which said “only a king knows what da coin do.”

Then the official Dogecoin account responded with the Shiba Inu meme dog popping out from behind a McDonald’s bag in a Tweet that received more than 21,000 likes.

But it was McDonald’s cheeky response that really stirred the conversation.

“only if @tesla accepts grimacecoin,” the fast-food chain wrote alongside a picture of a fake coin that featured popular McDonald’s purple mascot Grimace.

The exchange sent Dogecoin soaring 6.75% as of Wednesday morning to a valuation of $0.1501, while McDonald’s was up around 1.3% at the same time.

According to Coindesk , the exchange prompted the creation of more than 10 different grimacecoin tokens on the Binance Smart Chain network, the most successful of which reached a peak of $2 million in market capitalization.

Another grimacecoin created on the Ethereum blockchain reached a $6 million market capitalization at its peak.

If McDonald’s were to take Musk up on his proposition, it would become the first fast-food chain to accept crypto, following suit of other major businesses like AMC movie theaters and PayPal.

But the concept might not be too out-of-the-box for the chain, which dipped its toes into the metaverse waters when it doled out free NFTs of its famed McRib sandwich on Twitter late last year.

Though the legitimacy of the different blockchain grimacecoins is still unknown, if investors have learned anything from the volatility and lack of regulation in the crypto world, grimacecoin might just be the next big thing.

The billionaire took to Twitter to share his thoughts on the economy and potential of a recession.
MARKETS・1 DAY AGO
Entrepreneur

The social media company had its annual shareholders meeting on Wednesday.
BUSINESS・2 DAYS AGO
Daily Mail

In another setback for the budding, yet controversial, telehealth mental health company Cerebral, it now will no longer have its prescriptions filled by CVS and Walmart - two of the largest retail pharmacies in America. It has been a turbulent month for the San Francisco, California-based, company so far, with...
ECONOMY・2 DAYS AGO
Entrepreneur

Who Is Jack Ma? Why the Billionaire Says Alibaba Isn't the Chinese Amazon

The founder of the global eCommerce giant explained his business philosophy at the World Economic Forum.
BUSINESS・2 DAYS AGO

Should Dollar General or Dollar Tree Give Investors a Case of FOMO?

Shares of Dollar General and Dollar Tree are rallying the day after both companies reported strong earnings. In this article, we’ll look at each stock and let you know if...
RETAIL・2 DAYS AGO
Entrepreneur

Affirm Stock Has Affirmed a Bottom

The Canada-based functional materials and nanocomposite products developer Meta Materials (MMAT) has achieved strong topline growth in its most recent quarter, with its revenues increasing a whopping 399% year-over-year. Furthermore,...
MARKETS・3 DAYS AGO
Entrepreneur

The 5 Foolproof Steps to Pitching Your Story to the Media

Getting featured in the media helps to build authority and trust, but to do that, you'll need an effective pitch. Here's how to pitch like a pro.
CAREER DEVELOPMENT & ADVICE・1 DAY AGO

How to Leverage a Nontech Background (and Fight Imposter Syndrome)

Having a nontraditional background can be the secret to creating value in tech and attracting funding. The key is to understand how to leverage your unique skills.
MARKETS・18 HOURS AGO
Entrepreneur

3 Compelling NFT Projects Your Company Can Learn From

From unforgettable cinematic moments to photojournalism at its finest, these three NFT drops can remind businesses how much pictures are worth when they're inextricably woven into a shared cultural history.
ECONOMY・1 DAY AGO
TechRadar

Microsoft Word is set to receive an update that will extend a fan-favorite feature to the web application. According to a roadmap entry released (opens in new tab) by Microsoft, those that use the word processor exclusively on the web will soon benefit from the popular dark mode feature. "Dark...
TECHNOLOGY・25 MINUTES AGO
Entrepreneur

Entrepreneurs typically think about selling during Memorial Day, but these sales show how they can save on essential products and experiences too.
ECONOMY・23 HOURS AGO

Recruitment Is Changing and Companies Are Wasting Resources Without Realizing It

Walmart, Flipkart, Juspay, Amazon and Intellect are a few names that have very well adapted to the changing recruitment landscape and saved time and resources.
ECONOMY・1 DAY AGO