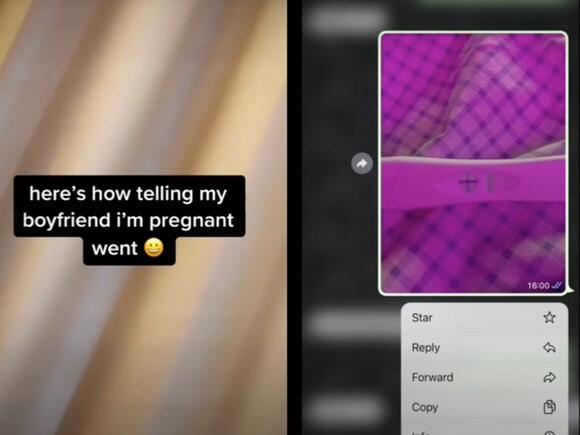 This TikTok gives a whole new meaning to the phrase, “I tested positive”.

In a hilarious video that now has over 16 million views , TikToker Hannah Alexis Grace shared her boyfriend’s confused reaction to finding out she’s pregnant over text.

The TikTok begins with screenshots from the couple’s conversation, with a voiceover saying “Here’s how telling my boyfriend I’m pregnant went.”

Hannah tells her partner, Charlie, that she finally knows why she feels ill, and sends him a picture of a positive pregnancy test. His response? “Are you joking me”.

He asks his girlfriend if anyone knows she’s positive, to which she responds with the name of two pals. After swapping a few expletives, he says, “Well we’re both gunna have to isolate for 10 days.”

It seems as if he was thinking of the other kind ofpositive. He even asked his girlfriend if she reckons her mother is positive too. Hannah saves Charlie from his mistake and tells him that she’s pregnant, to which he replies: “Omg.” Finally, an appropriate reaction.

The video racked up over two million likes, and TikTokers flooded the comments. “10 days isolation?? Try 18 years,” one user said. “When I was pregnant I showed my bf the ultrasound pics and he just shakes his head and says what’s this,” another one shared.

Some commenters were astounded that Hannah decided to announce her baby news to her boyfriend over text. “He thought it was a covid test because telling someone they’re going to be a father is not something that should be said through text,” said TikTok user who goes by the name Tara.

A TikToker named Stephen came to Hannah’s defense: “What’s wrong with people? If someone decides to tell someone she’s pregnant over text, why do y’all care? Congratulations to you both!” Hannah agreed, and said, “I am carrying and growing this baby for 9 months, I will tell him how I want.”

you told your boyfriend you're pregnant through a text message...🤦🏻‍♀️

I think it's super funny that commenters are finding fault with the method of communication rather than the fact this man doesn't know what a pregnancy test looks like NOR a covid test.

GENERAL Hospital revealed a major character change is coming to the show this week as one of its stars battles health issues. There are often comings and goings happenings on soaps, and the latest cast switch-up involves longtime cast member Nancy Lee Grahn. Nancy, who turns 66 on Thursday, has...
CELEBRITIES・28 DAYS AGO
People

Megan Fox wants her kids to express themselves however they please. In a wide-ranging interview with Glamour U.K. for their April cover story, the 35-year-old actress opens up about how she teaches her children, Journey River, 5, Bodhi Ransom, 8, and Noah Shannon, 9, about gender identity and encourages them to be confident in who they are.
FAMILY RELATIONSHIPS・27 DAYS AGO
The Independent

A woman has revealed several “red flags” that she found in the apartment of the man she’s dating, which included two books about pregnancy and a woman’s ring.In a recent video shared to TikTok, Devin, @discoveringdevin, filmed herself sitting on a bed and putting her thumb down, as the text reads: “Red flags in his apartment.”She then began by showing four Apple MacBooks, all placed on top of each other, on a desk. “Four laptops…what are you hiding?” Devin wrote in the text over the clip.Next, she documented what appeared to be a “girl’s ring” on a white shelf....
RELATIONSHIP ADVICE・28 DAYS AGO
Newsweek

Fans have defended Olivia Wilde from ‘problematic’ rumours that she may be pregnant after she was seen wearing a loose-fitting T-shirt.The pregnancy rumours began to circulate after a photo of Wilde was posted on Twitter, in which she could be seen wearing a white T-shirt that said “Morrissey” and a pair of black sweatpants.“Is Olivia Wilde pregnant lol,” one Twitter user wrote, along with the photo of the actor.“Soooooo… it’s true then… she’s PREGNANT,” another person added.The rumour also prompted some fans to suggest that Harry Styles, who has reportedly been dating Wilde since January 2021, was the father. The...
CELEBRITIES・6 HOURS AGO
Hello Magazine

Robin Roberts got emotional as she opened up about her relationship with partner Amber Laign, especially in the midst of a challenging health battle. The Good Morning America star made an appearance on The Ellen DeGeneres Show to promote her new book, Brighter By the Day. VIDEO: Robin Roberts enjoys...
CELEBRITIES・28 DAYS AGO
Newsweek

Heard was shown choosing not to sit with her attorney when her questioning concluded and instead exited the courtroom.
FAIRFAX, VA・5 DAYS AGO
Insider

According to Tina Brown's new book, "The Palace Papers," Prince William was aware of his status as future king from a young age.
CELEBRITIES・27 DAYS AGO

Unfortunately, the 27-year-old mother and the 31-year-old father say their baby daughter has months to live. The 1-year-old child is suffering from a rare condition which was caused by a gene defect both parents carry. The parents knew something was wrong with their child when the baby started to go off her food at six weeks. The baby also started to lose weight, the couple said. The condition was confirmed with genetic testing and the doctors said it affects her ability to absorb the nutrients she needs from food. The condition is so rare it is thought to only occur in one in 79,000,000 people, the doctors said.
WEIGHT LOSS・28 DAYS AGO
The Independent

The Kardashian-Jenner clan were in Italy this weekend to attend the nuptials of Kourtney Kardashian and Travis Barker, where the famous family rotated through a number of extravagant designer looks.However, it appears the dresses weren’t always easy to navigate Italy in, as Kylie Jenner at one point captured the moment her sister Kendall Jenner struggled to walk in the dress she wore for the wedding ceremony.In a clip shared to Kylie’s Instagram Stories on Sunday, Kendall, 26, who was wearing a Dolce & Gabbana champagne-coloured dress with a low back and floral detailing, could be seen wearing slide sandals...
CELEBRITIES・10 HOURS AGO
Newsweek

According to the boy’s mothers, a teacher at the charter school decided to cut their son’s hair while he was in distress, instead of calling them for help. Now, the mothers claim that this will not go unnoticed until everyone is held accountable. The boy’s parents were reportedly upset that the teacher didn’t find a more effective way to help their son aside from cutting his hair. The boy’s mothers also said that their son was proud of the afro he was growing. “What made her think that this is OK? if you were going to help my child why wouldn’t you do it the proper way, common sense way, the helpful way? By getting him some real help?” one of the mothers said.
MINNESOTA STATE・27 DAYS AGO

Walking at a brisk pace for just 75 minutes every week could cut your risk of depression, a new study finds. The World Health Organization recommends everyone should exercise for at least two-and-a-half hours every seven days. But researchers at Cambridge University, England, found adults who got half as much...
FITNESS・28 DAYS AGO
Newsweek

Fellow parents and teachers were disturbed by the man's behavior and praised the mom for stepping in to protect her daughter.
FAMILY RELATIONSHIPS・27 DAYS AGO
Upworthy

He's a regular gold retriever.
ANIMALS・27 DAYS AGO
The US Sun

WEDDINGS are meant to be happy occasions where loved ones come together to celebrate a new union. But, as we all know, there’s usually some drama involved during every stage of the planning. One woman has received backlash online because of the location she chose to marry her second...
RELATIONSHIP ADVICE・28 DAYS AGO
The US Sun

WHEN little Rio Fowler started to vomit and suffer with diarrhoea, his parents feared he'd been struck by a tummy bug. Mum Karen and dad Ryan said their daughter who was in pre-school had gastro so thought he had caught it off her. The 15-month-old had to be taken to...
KIDS・27 DAYS AGO
Hello Magazine

The Today Show stars, including Hoda Kotb, Savannah Guthrie, and Craig Melvin, are reeling from the death of a beloved fellow Today host, one whose hiring onto the show made history at NBC studios. The co-hosts took a moment out of Monday morning's show to honor the legacy of Jim...
CELEBRITIES・28 DAYS AGO
The Independent

Helen Skelton has revealed that she has separated from her husband, rugby player Richie Myler.The Countryfile host announced the news in an Instagram statement, writing that Myler has “left the family home”.Skelton’s announcement comes just four months after they welcomed their third child.“Very sad to say that Richie and I are no longer a couple,” she wrote. “He has left the family home. We will be doing our best to co parent our small children.”Skelton, who married Myler in 2013, accompanied the post with two broken heart emojis.The pair have three childen together: Ernie, aged six, Louis, aged...
CELEBRITIES・27 DAYS AGO
Popculture

90 Day Fiancé stars Anna-Marie Campisi and Mursel Mistanoglu have added a little boy to their family! The couple, who tied the knot on Season 7 of the TLC reality show, announced on Instagram this week that their son, Gokhan John, had been born via a surrogate on Monday, April 11 after the couple's initial struggle with fertility.
FAMILY RELATIONSHIPS・27 DAYS AGO