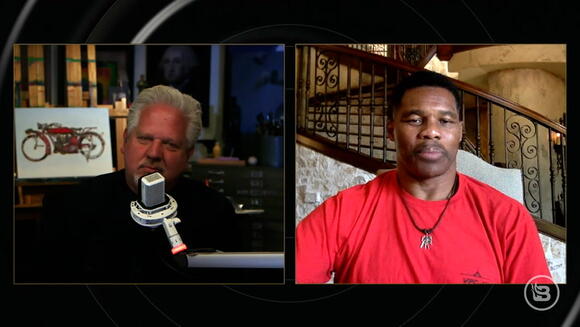 One of the Republican Party’s most controversial top-tier Senate candidates has reported spectacular fundraising returns, further raising his profile even as some worry he could hurt the party’s chances of retaking the upper chamber.

Herschel Walker , who is challenging freshman Georgia Senator Raphael Warnock, pulled in some $5.4m in donations over the last quarter of 2021, a sum that vaults him to the very top ranking of Senate fundraisers this cycle.

A former NFL player, Mr Walker was endorsed by Donald Trump last October, and since then has attracted the support of many other top Republicans, including Mitch McConnell and other would-be colleagues on Capitol Hill.

However, Mr Walker’s campaign has been dogged by unedifying stories about him. After being heavily criticised for an alleged history of violent behaviour, he admitted to abusing his ex-wife, saying he had since sought therapy to deal with his personality. “Just like I broke my leg,” he told Axios last year, “I put the cast on. It healed.”

Nonetheless, in a sign of how seriously the stories of partner violence were taken, GOP Georgia State Agriculture Commissioner Gary Black – one of Mr Walker’s primary opponents – said the issue should disqualify him from the race, advising that he drop out and instead “help other people that have the same problems”.

Mr Walker has also skirted other controversies, including claims that he exaggerated his financial success and misrepresented his educational record . In one incident, he had to cancel a Texas fundraiser because one of the organisers had a mocked-up swastika made up of vaccination syringes displayed on her social media profile.

His own remarks about the Covid-19 pandemic have been erratic at times; in a bizarre interview with far-right ex-Fox News host Glenn Beck, he claimed to have “something that can bring you into a building that would clean you from Covid as you walk through this dry mist. As you walk through the door, it will kill any Covid on your body. EPA-, FDA-approved”.

The Georgia race is set to be one of the most closely watched and well-funded of this year’s midterms, as the Republicans seek to win a majority in the upper chamber of Congress. They are widely expected to win back the House of Representatives, but the Senate map obliges them to fight tough races in states Joe Biden won in 2020.

The party has taken heart from Mr Biden’s sinking approval ratings and Senate Democrats’ failure to pass the president’s full agenda in the face of intransigent Republican opposition. However, the risk remains that by choosing as their candidates hardcore right-wingers backed by Donald Trump, the party could alienate the swing voters whose disillusionment with Mr Biden they are now depending on.

And worryingly for Mr Walker, his opponent, Mr Warnock, has $23m at his disposal for the campaign.

Why controversial?.. because he’s black for trump or doesnt fit the “ if your black you go democrat” mold

Which of his 37 multiple personalities will show up for the debate though?

He;s not qualified to run for political office, Why because he supports trump trump's friend in the football league

Greene testified on Friday that she didn't recall whether she asked Trump to invoke military rule, despite telling Meadows to relay the idea to Trump.
ATLANTA, GA・23 DAYS AGO
The Independent

Texas Senator Ted Cruz is facing a lawsuit from a campaign group seeking to get him disbarred in Texas for his participation in a failed attempt to get the 2020 election overturned at the US Supreme Court.Mr Cruz, who formally objected to Joe Biden’s victory in the Senate even after the Capitol was attacked by Trump supporters during the proceedings, is accused of violating legal ethics by participating in the doomed Texas v Pennsylvania case that his state sue several others that Mr Biden had legitimately won.Meanwhile, as the 6 January committee prepares for a summer of what promise...
TEXAS STATE・52 MINUTES AGO
The Independent

A $40 billion infusion of military and economic aid for Ukraine and its allies was on the cusp of Senate passage Thursday as both parties rallied behind America's latest, and quite possibly not last, financial salvo against Russia's invasion.Thursday's planned vote would give final congressional approval to the package, three weeks after President Joe Biden requested a smaller $33 billion version. The House approved it last week after beefing up its defense and humanitarian expenditures, and Senate passage was not in doubt, though a modest group of America First-minded Republicans was expected to vote “no.”Biden's quick signature was certain...
FOREIGN POLICY・3 HOURS AGO
The Independent

Patricia Arquette has angrily confronted Elon Musk after he revealed his plans to vote Republican.Writing on Twitter earlier today (18 May), Musk explained that he has switched allegiance from Democrat as they have become a party of “division and hate”.He wrote: “In the past I voted Democrat, because they were (mostly) the kindness party. But they have become the party of division & hate, so I can no longer support them and will vote Republican. Now, watch their dirty tricks campaign against me unfold.”To this statement actor Arquette responded: “You say this with a straight face as Republicans roll...
CELEBRITIES・20 HOURS AGO

Fox News host Lisa Kennedy said on Monday that U.S. lawmakers "should not have the government involved in education at all," suggesting that America should rid itself of the public school system entirely. Kennedy's remarks came during Monday's segment of "Outnumbered" in which Kennedy was facilitating a discussion around the...
CONGRESS & COURTS・22 DAYS AGO
People

MEXICO CITY — Mexican President Andrés Manuel López Obrador on Monday urged U.S. Latinos not to vote in November’s midterm elections for politicians who have “mistreated” them, in response to a comment by former U.S. President Donald Trump. Trump boasted at a rally in...
PRESIDENTIAL ELECTION・23 DAYS AGO
Fox News

The intelligence the U.S. shared with Ukraine helped it continue to resist Russian invading forces and even shoot down a transport plane carrying hundreds of Russian troops, a new report revealed. According to current and former U.S. officials who spoke with NBC News on Tuesday, the U.S. provided critical intelligence...
MILITARY・22 DAYS AGO

An attorney for the campaign said they thought they were allowed to use the funds based on a "good faith" understanding of the "highly confusing" rules.
FLORIDA STATE・18 HOURS AGO
Newsweek

Individual judges may not like the policy choices of the Biden administration, but it is not their job to weigh in on that policy debate.
TEXAS STATE・23 DAYS AGO
The Independent

Defeated Pennsylvania Senate candidate Kathy Barnette has placed blame for her third-place finish in Tuesday’s Republican primary squarely on the shoulders of Fox News host Sean Hannity. In a video posted to her Twitter account early on Wednesday morning, Ms Barnette thanked her supporters, but pivoted to attacking the Fox commentator.“I do want to say: never forget what Sean Hannity did in this race. Almost single-handedly, Sean Hannity sowed seeds of disinformation, flat-out lies every night for the past five days. And that was just extremely hard to overcome, apparently”.Ms Barnette’s grievance with Hannity stems from his decision to...
PENNSYLVANIA STATE・19 HOURS AGO
Salon

House Republican Leader Kevin McCarthy (R-CA) (Joe Raedle/Getty Images) There was a flurry of headlines last week when news broke that House Minority Leader Kevin McCarthy (R-CA) said out loud that he thought former President Donald Trump should resign in the wake of the deadly Jan. 6 insurrection. The focus was on the fact that McCarthy lied about ever expressing that thought - until, of course, he was confronted with the audio recording of him saying exactly that.
CONGRESS & COURTS・23 DAYS AGO
MSNBC

Chuck Todd looks at the primary races and says that Republicans in Pennsylvania are going to be asked if they're okay with handing the keys to overseeing the 2024 election to a person who tried to invalidate a free and fair election in 2020.May 18, 2022.
PENNSYLVANIA STATE・22 HOURS AGO