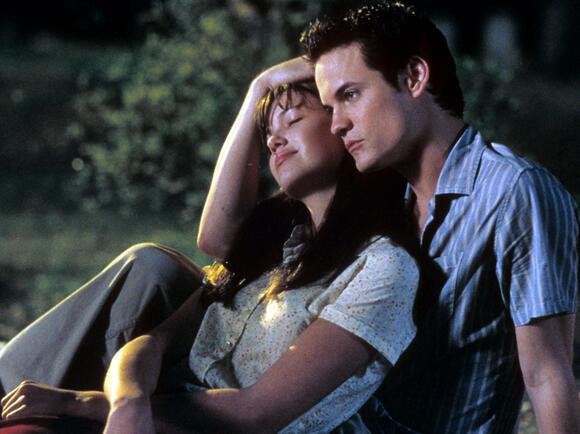 The teen romance drama "A Walk to Remember" turned 20 years old this month and Shane West told People he kept a souvenir to commemorate his experience on the film working with costar Mandy Moore .

"I have a lot of Mandy's hair," West said. "I hope, if it's still in that book. I haven't looked at that in years." The "book," West explained, was a "yearbook" he'd made to capture memories on set in North Carolina.

"I have everybody from the film that signed it and they put in great messages," he said. He didn't elaborate on how a lock of hair potentially got in there, but it was a presumably deliberate and consensual offering.

"A Walk to Remember" was released in theaters on January 25, 2002. An adaptation of the Nicholas Sparks book of the same name, it follows teenagers Landon Carter (West) and Jamie Sullivan (Moore) as they fall in love.

It's an example of the opposites attract trope at its best. Landon is a "bad boy" who rarely speaks to studious preacher's daughter Jamie until he's forced to join the school play. As they push each other out of their comfort zones, an undeniable spark develops between them that a tragedy threatens to destroy.

West and Moore have a similar magnetic energy on-screen, which is part of the reason why it almost instantly became a modern classic. The costars told People that they did have crushes on each other at the time, but West said they "always kept it professional" — in part because Moore was only about 17 years old while they were filming.

The "Gotham" actor admitted that they "inherently cared about each other" although it never developed into anything romantic. "Mandy was not 21, so it was more of a loving thing where we were just all out to protect her," he said.

Moore understands why the movie is so beloved and believes that the connection she had with West is palpable and rare. "Somehow, we sort of just had this really natural, effortless chemistry with one another," she said. "And I think that comes across in the film and that's hard to get. You can't really fake that ."

Finn Wolfhard says that he and his 'Stranger Things' castmates don't talk all the time: 'Do you text your cousins every day?'

Finn Wolfhard said that his "Stranger Things" castmates are like family, and he knows that he can ask them for help if he needs it.
2 DAYS AGO
Insider

Austin Butler says he's finally 'getting rid of' his Elvis accent: 'I have probably damaged my vocal cords'

Since starring in the Baz Luhrmann film, Butler has used his Elvis accent in numerous public appearances. He says the accent is going away.
1 DAY AGO
Insider

Lautner appeared on the latest episode of the Dear Media podcast "The Toast" and said that the competitiveness was "a little bizarre."
2 DAYS AGO
Insider

Dave Bautista says he and Jason Momoa's 'Lethal Weapon'-type buddy cop comedy will likely shoot next year: 'I think it's going to be a hit'

'We have a great script," Bautista told Insider about the project that sparked a huge bidding war. "MGM is still dedicated to doing this film."
HAWAII STATE・1 DAY AGO
Insider

"Everything blurred, like it was happening in slow motion," Anderson wrote, adding, "I felt like I died that night, too."
3 DAYS AGO
Insider

Finn Wolfhard said that Winona Ryder is also "one of the funniest texters ever" because she'll ghost conversations she started.
1 DAY AGO
Insider

The daughter of "Westworld" star Thandiwe Newton and notable movie director Ol Parker weighed in on the "nepo baby" debate.
2 DAYS AGO
Insider

Witherspoon said on "Jimmy Kimmel Live!" that she and Kutcher sent videos to each other to get to know each other before shooting the film.
IOWA STATE・1 DAY AGO
Insider

Finn Wolfhard was 'really proud' of his 'Stranger Things' costar Noah Schnapp after he came out: 'I just had a big smile on my face'

Finn Wolfhard said that he was happy for his "Stranger Things" costar Noah Schnapp after he came out as gay on social media.
2 DAYS AGO
Insider

Kanye West's former security guard Steve Stanulis 'cannot escape' the tabloid drama, even 7 years later. So he made a tell-all documentary about it.

Steve Stanulis worked briefly as a bodyguard for Kanye West in early 2016 but became a tabloid figure whose association with West has persisted.
2 DAYS AGO
Insider

In a new video with GQ, "Stranger Things" star Finn Wolfhard recounted a scene where Joe Keery's delivery of a line made his costar crack up.
2 DAYS AGO
Insider

Melinda Dillon, the Oscar-nominated actress best known for playing Ralphie's mom in 'A Christmas Story,' has died at 83

According to an obituary shared by People, Dillon died on January 9. No cause of death was given in the announcement.
LOS ANGELES, CA・8 HOURS AGO
Insider

Finn Wolfhard says he started having panic attacks as a teenager on 'Stranger Things,' but didn't 'talk about anything' because he didn't feel like there was time

Finn Wolfhard said that he started experiencing panic attacks as a teenager, including at times on the set of "Stranger Things."
3 DAYS AGO
Insider

"I think I even accepted the offer the next day," McConaughey revealed in a Vanity Fair oral history on the rom-com.
1 DAY AGO
Insider

Kylie Jenner and Travis Scott threw a birthday party for their daughter Stormi, which included a nod to the tragic Astroworld music festival in 2021.
1 DAY AGO
Insider

Noah Cyrus has been wearing daring looks in Paris over the last few weeks. Most recently, she wore an ensemble made entirely of puffer material.
1 DAY AGO
Insider

Jane Fonda says she 'assumed I wouldn't live past 30' because of an eating disorder: 'I was very, very unhappy'

The actor and activist, now 85, said she was "miserable" at the height of her movie career because of her bulimia which took over her life.
LOS ANGELES, CA・1 DAY AGO
Insider

"Ant-Man" star Kathryn Newton also said she didn't get to play golf with Bill Murray in London because "it turns out Marvel movies are very intense."
CALIFORNIA STATE・1 DAY AGO
Insider

The "Twilight" actor named the moment with his ex-girlfriend as the one moment in his life he would choose to go back to and change if he could.
2 DAYS AGO