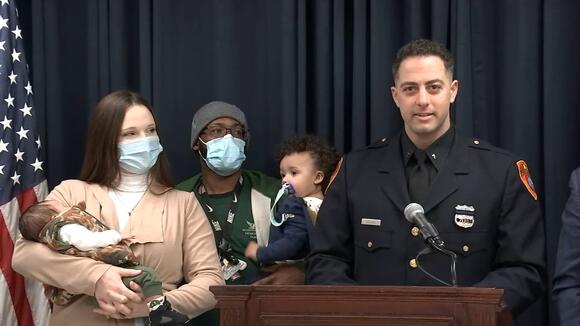 A mother and her new son reunited Wednesday with a Suffolk County police officer who, with the help of a paramedic, helped deliver and save the baby born on Christmas Eve. Seventh Precinct Officer Kyle Negrin responded to a call for a woman in labor in a vehicle on Francis Mooney Drive in Ridge around 7 p.m. on December 24. Chelsea Anderson, 28, of Middle Island, had been scheduled for a C-section due to the umbilical cord being wrapped around the baby's neck. The baby, however, had other plans. "It was a very unexpected delivery," she said. "I was very nervous, very scared, especially with the umbilical cord wrapped around three times." ALSO READ | NJ tow truck driver hailed as a hero after saving driver from crash

The Ridge Fire Department ambulance arrived, and Negrin joined Paramedic Eric Ramirez in the back. They were about five minutes from Stony Brook University Hospital when Baby Avion arrived, and Negrin and Ramirez successfully unwrapped the umbilical cord. "They said five minutes, and it was kind of like when you have to use the bathroom and you're close to home," Anderson said. "You really have to go the closer you get." Thanks to their efforts, both Anderson and her son are healthy. "It was definitely an honor," Negrin said. "Probably the proudest moment of my whole career delivering Avion." And he's had quite a career. At age 32, he's spent eight years as a police officer, a trained EMT since age 18, and an experienced father of three. Avion already has a big brother, Asher, but the best part -- a guardian angel in Officer Negrin -- who says he just felt blessed in a career that often involves tragedy. "Whether it be a fatal car accident, a shooting, a lot of negative things that police deal with, this was something nice and a good feeling to deal with," he said. ALSO READ | 5 tax changes that can boost your refund this year

It's almost time to file your federal tax return and there are a handful of changes you need to know about, including steps you need to take regarding child tax credit payments.

Suffolk County Police Commissioner Rodney Harrison praising the heroic efforts of those who helped make this tiny miracle happen. "And even though Chelsea wasn't due to give birth until the 27th with Avion, life doesn't always work out that way." Avion Eugene Hammonds was 7 pounds, 3 ounces. ---------- * More Long Island news * Send us a news tip * Download the abc7NY app for breaking news alerts * Follow us on YouTube

A 1-year-old girl was killed and her mother injured when they were struck by a car while crossing a Staten Island street Thursday morning.
STATEN ISLAND, NY・3 HOURS AGO
ABCNY

Two NYPD officers were reunited with a blind man they pulled to safety after he stumbled off a subway platform in Brooklyn last week.
BROOKLYN, NY・3 HOURS AGO
ABCNY

Police are investigating two fatal hit-and-run crashes on Long Island that happened not far from each other. Both happened in Suffolk County late Monday night.
SUFFOLK COUNTY, NY・1 DAY AGO
ABCNY

Three females were killed in a crash near a catering hall on Long Island, as they left a Sweet 16 birthday party.
ACCIDENTS・2 DAYS AGO

Animal Control rescued 16 German shepherds and three Dobermans from what officials called the dilapidated basement of a once shining mansion in New Jersey Tuesday.
PATERSON, NJ・6 HOURS AGO
ABCNY

The 90-year-old woman was walking on West 64th Street when a man approached her and took her purse from her walker.
UPPER WEST SIDE, NY・6 HOURS AGO
ABCNY

Police say they found a 22-year-old man with a gunshot wound to his stomach on Clarkson Avenue just before 7 p.m. and a dead man in an apartment up above on the second floor.
4 HOURS AGO
ABCNY

Andrew Abdullah said nothing as he was formally charged with second-degree murder and weapons charges.
BROOKLYN, NY・8 HOURS AGO

Authorities say 25-year-old Andrew Abdullah, who has about 20 prior arrests, was the man seen pacing around the subway car before shooting 48-year-old Daniel Enriquez in the chest, killing him.
NEW YORK CITY, NY・1 DAY AGO
ABCNY

Nassau County is increasing waterway patrols ahead of the busy Memorial Day holiday weekend and urging boaters to refrain from drinking and driving.
NASSAU COUNTY, NY・1 DAY AGO
ABCNY

Woodland Park Police say the body of the 15-year-old boy from Paterson was recovered Sunday morning in Great Notch Reservoir.
3 DAYS AGO

The man was shot near the BP gas station at Communipaw Avenue and West Side Avenue just before midnight on Tuesday.
JERSEY CITY, NJ・1 DAY AGO
ABCNY

The manhunt is on for a gunman who shot a man in an unprovoked attacked on a Manhattan-bound subway train.
MANHATTAN, NY・3 DAYS AGO
ABCNY

A 19-year-old man is in the hospital after being attacked by another man with a hatchet.
MANHATTAN, NY・2 DAYS AGO

Three people were killed and several others were injured in a crash near a catering hall on Long Island, according to police.
NEW HYDE PARK, NY・3 DAYS AGO
ABCNY

Charges were filed against nearly three dozen alleged gang members who police say rapped about their crimes and beat a pigeon to death with a cane.
BRONX, NY・2 DAYS AGO
ABCNY