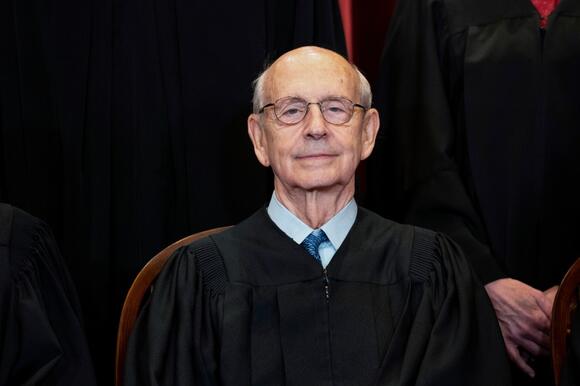 ( The Hill ) – Justice Stephen Breyer is planning to retire from the Supreme Court, according to multiple reports, ending a nearly three-decade career on the bench and clearing the way for Democrats to seat the liberal jurist’s replacement on the 6-3 conservative majority court.

The move caps off months of will-he-or-won’t-he speculation and growing calls from the left for the 83-year-old Clinton nominee to make way for a rejuvenated liberal wing and more diverse bench.

The development, which was first reported by NBC News, comes amid a blockbuster term which could see the justices rein in federal abortion rights enshrined in Roe v. Wade and expand the Second Amendment.

The timing of Breyer’s departure is consistent with the modern trend of Supreme Court justices stepping down when the White House is controlled by the same party behind their nomination, a dynamic known as “strategic retirement.”

With Democrats holding a razor-thin majority in the Senate, the question of Breyer’s possible retirement had gripped Washington, particularly liberal activists and progressive lawmakers.

Many liberals had pointed to the late Justice Ruth Bader Ginsburg ’s death in September 2020 and subsequent confirmation of conservative Justice Amy Coney Barrett in the waning days of the Trump administration as a cautionary tale for Breyer, and urged him to avoid what they view as Ginsburg’s severe miscalculation.

“I’m sure Breyer realizes what a blow Justice Ginsburg’s non-retirement was to the possibility of ever having an even mildly progressive Court in our lifetime,” Dan Kobil, a law professor at Capital University, told The Hill in a previous interview. “And that describes Breyer — mildly progressive.”

The White House, for its part, had sought in public remarks to avoid any appearance of the president wielding influence over Breyer’s decision.

At the same time, though, President Biden has made no secret of his desire to diversify the bench, pledging during the 2020 campaign to nominate the first Black female Supreme Court justice. Many believe that among his short-listers is Judge Ketanji Brown Jackson, a former Breyer clerk who was recently confirmed to the D.C. Circuit Court of Appeals.

Breyer’s announcement may take some by surprise, given that by all outward indications, he still enjoyed the job. Yet other court watchers said that after Breyer’s lengthy and distinguished career on the bench, he no longer needs to prove anything.

Brianne Gorod, a former Breyer clerk who now serves as chief counsel at the progressive nonprofit firm Constitutional Accountability Center, told The Hill in a previous interview that Breyer’s mark on American law is already visible.

“An important part of Justice Breyer’s legacy will be his broader ideas about our system of government and the role of the courts in that system of government … He believes the courts should be attuned to the real-world context in which they are acting, as well as the consequences that their decisions will produce,” she said. “These ideas are evident in not only his extra-judicial writings, but in many of the opinions he has written over the years.”

For the latest news, weather, sports, and streaming video, head to mypanhandle.com.

BAY COUNTY, Fla. (WMBB) — A woman who was convicted of the 1997 murder of 25-year-old taxi driver Richard Phillips when she was 15-years old, will remain in prison after an appeals court decided to uphold her life sentence. In 2020, Rebecca Falcon received a new sentencing, after the U.S. Supreme Court ruled in 2012 […]
PANAMA CITY, FL・1 DAY AGO
WMBB

PANAMA CITY BEACH, Fla. (WMBB) — The Panama City Beach Police Department announced Wednesday that 15 more people have now been charged in connection to a riot at Walmart on Front Beach Road back in March. Using social media, the PCBPD identified the suspects, all from Alabama. They are between the ages of 17 and […]
PANAMA CITY BEACH, FL・1 DAY AGO
WMBB

BCSO: Fountain woman set house on fire with child inside

CORRECTION: The date of the crime was incorrectly reported in the initial report. It has been corrected in this version. FOUNTAIN, Fla. (WMBB) — A Fountain woman set her curtains on fire and tried to burn her house down while an 11-year-old was inside the home, according to court records. On April 16, Summer Dykes, […]
FOUNTAIN, FL・2 DAYS AGO
Daily Beast

Sen. Ted Cruz (R-TX) abruptly walked off from a British journalist’s questions about gun violence in America two days after an elementary school massacre in his state left 19 children and two adults dead. Cruz, who is due to appear at a National Rifle Association convention this weekend, became...
CONGRESS & COURTS・21 HOURS AGO

"We could overhear his father graciously complimenting his Democratic opponent," Conway wrote in her newly-released memoir about the 2016 election.
PRESIDENTIAL ELECTION・1 DAY AGO
MSNBC

We learned months ago that Republicans in several states created forged election materials after Donald Trump’s 2020 defeat, pretending to be “duly elected and qualified electors.” The Republicans then sent the documents to, among others, the U.S. Senate and the U.S. Archivist, as if the fake materials were legitimate. They were not.
PRESIDENTIAL ELECTION・1 DAY AGO
WMBB

Man arrested after shooting in Vernon

VERNON, Fla. (WMBB) — A Georgia man is behind bars in connection to a shooting at a local convenience store in Washington County. Law enforcement got the call at around 11:39 Saturday morning. Once deputies and EMS got on scene, they found an 18-year-old victim with a gunshot wound to the foot. Deputies said there […]
VERNON, FL・5 DAYS AGO
WMBB

Fatal crash shuts down portion of Highway 90 in Crestview

FRANKLIN COUNTY, Fla. (WMBB) — Franklin County authorities are still concerned about at least one bear, and maybe more, roaming around the county. Franklin County Sheriff A.J. Smith said the Florida Fish Wildlife Conservation Commission has had a ‘cavalier’ attitude about black bears, like the one that was seen walking through a cemetery this weekend. […]
FRANKLIN COUNTY, FL・2 DAYS AGO
WMBB

BAY COUNTY, Fla. (WMBB) — After Hurricane Michael, Bay County was able to recognize some deficiencies when it comes to infrastructure. Communication technologies were put on that list of improvements. Cell phones, TVs and computers were rendered useless after Hurricane Michael, making it difficult for safety officials to communicate important information to everyone in Michael’s […]
BAY COUNTY, FL・7 DAYS AGO

Bobcat recovering after being run over on Highway 231

BAY COUNTY, Fla. (WMBB) — A Bobcat is recovering after it was hit on Highway 231 near Bertha Jackson Road just after 7 a.m. on Tuesday morning. Bear Creek Feline Center was called out to assist with the removal of the injured Florida Bobcat. When they arrived, the Bay County Sheriff’s Office and FWC officers […]
BAY COUNTY, FL・1 DAY AGO
WMBB

CALHOUN COUNTY, Fla. (WMBB) — A 77-year-old Panama City man died in a single-car accident in Calhoun County. According to Florida Highway Patrol, a Ford F-150 was heading north on Melvin Grade Road trying to curve to the left. The driver was pulling out of a gravel driveway when he overcorrected, crossed into the southbound […]
PANAMA CITY, FL・5 DAYS AGO
WMBB

WALTON COUNTY, Fla. (WMBB) — A 27-year-old Ponce De Leon man died in a single-car crash in Walton County early Saturday morning. A Silverado pick-up was heading east on Highway 90 when the driver didn’t follow a curve in the road and lost control of the truck, according to the Florida Highway Patrol. The truck […]
WALTON COUNTY, FL・5 DAYS AGO

ST. ANDREWS, Fla. (WMBB) — A historic ship that was damaged during Hurricane Michael is finally on its way to being restored. The 144-year-old Governor Stone was officially moved on Saturday which marks the beginning of a restoration project. “It has finally happened and we are so excited. It was great watching the neighbors come […]
EDUCATION・5 DAYS AGO
WMBB

PANAMA CITY, Fla. (WMBB) – The city of Panama City is getting another large settlement to put towards Hurricane Michael recovery. The city commission approved the memorandum with the Florida Municipal Insurance Trust Tuesday morning. The total value of the settlement is around $73-million. Around $40-million of that has been used already on immediate repairs […]
PANAMA CITY, FL・2 DAYS AGO
WMBB

DOTHAN, Ala. (WDHN) — The Dothan Police Department is currently looking for a couple traveling through the Wiregrass. The pair is accused of conning local gas stations while getting around on a stolen vehicle. Joshua and Mary Matheny stopped at a Dothan gas station on May 10, and police say purchased upwards of $600 worth […]
DOTHAN, AL・7 DAYS AGO
WMBB

‘The pressure is on’: Parker Sports Complex rebuild continues

PARKER, Fla. (WMBB) — The Parker Sports Complex rebuild has been on the minds of residents and city leaders since it was destroyed by Hurricane Michael over three years ago. Now, the clock is ticking for the city to fix it up before funding is gone. Leaders have held meetings for the past few months […]
POLITICS・3 DAYS AGO