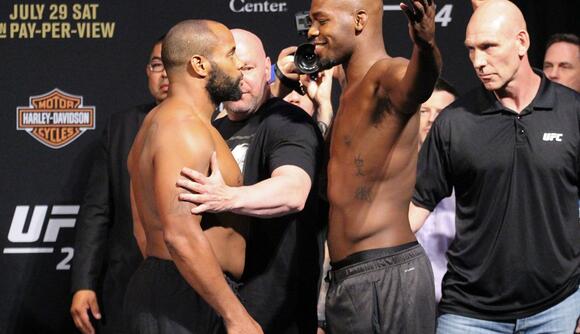 Jones (26-1 MMA, 20-1 UFC) hasn’t fought since retaining the UFC light heavyweight title against Dominick Reyes in February 2020, then subsequently relinquishing the title six months later. The former 205-pound king has since been prepping for his heavyweight debut but is yet to compete in the division.

While he hasn’t been active inside the cage, Jones has been pretty vocal on social media. He had his eyes peeled for Saturday’s heavyweight title unification fight between Francis Ngannou (17-3 MMA, 12-2 UFC) and Ciryl Gane (10-1 MMA, 7-1 UFC) at UFC 270 and wasn’t too impressed with either man’s performance – or Ngannou’s win.

But Cormier thinks Jones isn’t in a position to critique if he’s not actively fighting.

“For me, it’s about Jon Jones needs to fight,” Cormier said on his ESPN show “DC & RC.” “At some point, you got to fight. You got to fight. It’s one thing to be the champion, defending, fighting – even when him and I were going through our thing, he would get suspended, but then he would come back and he would fight. Even if that meant fighting Ovince Saint Preux whenever I was hurt, but ultimately he was fighting. Right now, he’s just talking. It’s like, when are you going to fight? Because for as bad as it was, Francis had a torn meniscus. Francis was hurt. Francis had a bad training camp. All these things. Francis still fought.

“So you can say, ‘Well, they’re not that good,’ but ultimately, they’re still in there doing their thing. Why aren’t you in there doing your thing? You are one of the most talented mixed martial artists of all time.Why aren’t you in there doing your thing against these guys, opposed to judging them, because for all of the bad blood and all the bad stuff between Francis and the UFC right now, Francis still went out there. He went out there, he fought hurt, and he got a victory.”

Ngannou dealt with plenty of adversity heading into his fight with Gane. The heavyweight champion was not only going through a contract dispute with the UFC, but he fought with a grade three MCL tear, as well as damage on his ACL and MPFL.

Cormier thinks that UFC 270 wasn’t an accurate depiction of the real Ngannou, who used a grappling-heavy approach to defeat Gane.

“So if you’re going to judge the apex predator that Francis is on last weekend, know that you’re judging a wounded apex predator,” Cormier said. “So you may think that he’s not as good now because of what you saw, but maybe you’re just putting yourself up for a bigger disappointment when you do finally make that jump.”

As a whole, Conor McGregor has reached the highest heights of the mixed martial arts world – but that doesn’t mean he’s winding down. Saturday, McGregor attended the Monaco Grand Prix race in Monte Carlo, where he provided a health update after months of recovery from a broken leg sustained against Dustin Poirier at UFC 264 in July 2021.
UFC・10 HOURS AGO
USA TODAY Sports Media Group

The former World’s Strongest Man put some of that strength on showcase Saturday in Poland. Mariusz Pudzianowski (17-7) took out Michal Materla (31-9) in the first round with a nasty knockout that stemmed from a right uppercut. A follow-up shot on the canvas was academic, and may have contributed to an extended time on the canvas for Materla, who needed several minutes before he was back to his feet.
COMBAT SPORTS・8 HOURS AGO
USA TODAY Sports Media Group

Jesus Ramos remained unbeaten on the Gervonta Davis-Rolando Romero card Saturday in Brooklyn. The rising 21-year-old junior middleweight contender had some difficultly with the undersized, but slick Luke Santamaria in the early rounds but gradually took control and won the 10-round bout by a wide decision. The scores were 98-92,...
BROOKLYN, NY・3 HOURS AGO
USA TODAY Sports Media Group

Erislandy Lara (29-3-3, 17 KOs) of Cuba stopped Gary O’Sullivan (31-5, 21 KOs) of Ireland 23 seconds into Round 8 of a scheduled 12-round middleweight bout on the Gervonta Davis-Rolando Romero card Saturday in Brooklyn. Lara put O’Sullivan down in Round 4. ***. Junior middleweight contender Jesus Ramos...
BROOKLYN, NY・12 HOURS AGO

Erislandy Lara beats up, stops Gary O'Sullivan in eighth round

Erislandy Lara demonstrated again that he can still fight as he approaches 40. The former 154-pound titleholder battered a game, but overmatched Gary O’Sullivan before stopping the Irishman in the eighth round of a scheduled 12-round 160-pound bout on the Gervonta Davis-Rolando Romero card Saturday in Brooklyn. Lara (29-3-3,...
COMBAT SPORTS・2 HOURS AGO