'The Batman' director talks Kurt Cobain's influence on the film 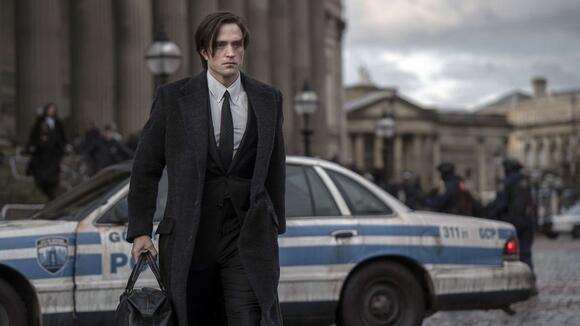 "The Batman" director Matt Reeves is discussing how the film's version of the Caped Crusader is influenced by late Nirvana front man Kurt Cobain.

In an interview with Esquire UK , Reeves details how the "Nevermind" song "Something in the Way," which plays in the trailer for "The Batman," is "part of the voice of that character."

"When I considered, 'How do you do Bruce Wayne in a way that hasn't been seen before?' I started thinking, 'What if some tragedy happened ... and this guy becomes so reclusive, we don't know what he's doing? Is this guy some kind of wayward, reckless, drug addict?'" Reeves told Esquire UK.

"And the truth is that [Wayne] is a kind of drug addict," the filmmaker added. "His drug is his addiction to this drive for revenge. He's like a Batman Kurt Cobain."

Reeves previously told Empire magazine that he was reminded of the 2005 Gus Van Sant film "Last Days," a fictional film loosely based on Cobain's death, while working on "The Batman."

"I started making this connection to Gus Van Sant's 'Last Days,' and the idea of this fictionalized version of Kurt Cobain being in this kind of decaying manor," Reeves said.

Robin Roberts got emotional as she opened up about her relationship with partner Amber Laign, especially in the midst of a challenging health battle. The Good Morning America star made an appearance on The Ellen DeGeneres Show to promote her new book, Brighter By the Day. VIDEO: Robin Roberts enjoys...
CELEBRITIES・25 DAYS AGO
Newsweek

Johnny Depp Jumps When He Sees Amber Heard Witness: 'He Saw a Ghost'

Click here to read the full article. It seems like everyone was rooting for Renée Zellweger and Ant Anstead to get together, including an unexpected duo: the Property Brothers. Drew and Jonathan Scott recently revealed that they were the ones that ended up getting Zellweger and Anstead to meet, and subsequently fall in love. And their hard work ended up paying off! Back on April 14, 2022, the Scott brothers sat down with ExtraTV to talk about everything from Drew’s upcoming fatherhood to Jonathan loving GF Zooey Deschanel’s Vanity Fair gown. While we loved the entire interview, we’re losing it over...
CELEBRITIES・26 DAYS AGO
The Independent

Johnny Depp praised Amber Heard for having “the strength of a thousand men” in a text to her mother, the Heard legal team revealed in court. As proceedings in Mr Depp’s defamation trial against Ms Heard resumed on Monday, her attorney Ben Rottenborn said Mr Depp was going into detox for addiction to pain killers when he spoke to Ms Heard’s mother. Johnny Depp trial – latest updatesOn 19 August 2014, Mr Depp wrote: “my dearest Paige, how unbelievably kind and pure your message was. I am beyond thankful to have you in my life. There’s no luckier man on...
CELEBRITIES・25 DAYS AGO

The show — and the vacation — must go on. Jada Pinkett Smith determined that the family trip to India wasn't going to be canceled due to Will Smith's Oscars slap. "Will and Jada have taken the family on [a] vacation that was already planned," a source exclusively tells Us Weekly. The Concussion star, 53, […]
CELEBRITIES・26 DAYS AGO
ComicBook

After weeks of silence, Chris Rock has finally addressed his now-infamous incident with Will Smith at March's 94th Annual Academy Awards. During another sold-out show at Baltimore's Lyric Performing Arts Center on Friday, Rock directly referenced the slap, but only spent a second on it before moving on with his set.
BALTIMORE, MD・26 DAYS AGO
Hello Magazine

Kate Hudson has realized one of her dreams and has taken to Instagram to share the incredible news with her 15 million followers. Sharing two pictures of her looking casual in a pair of baggy dip-dyed trousers and a white tank top, and singing into a microphone, the actress announced a surprising career change.
CELEBRITIES・25 DAYS AGO
Hello Magazine

Sharon Osbourne, 69, lives with her husband Ozzy, 73, and their 11 pets in a vast LA mansion but with the Black Sabbath star's ongoing battle with Parkinson's Disease, it's looking like it's all change. The Sun has reported that The Talk star and her husband plan on overhauling a...
CELEBRITIES・25 DAYS AGO

Johnny Depp was asked about a text in which he told Amber Heard to take “no meetings” and “no movies”.The actor took the stand again on Monday (25 April) as part of the defamation case opposing he and Ms Heard in Fairfax, Virginia. He has testified every day since Tuesday (19 April), except when court broke on Friday (22 April) and on the weekend. Mr Depp was first questioned by his own lawyer and has since been cross-examined by Ms Heard’s legal team.Ms Heard’s attorney first read a text from her to Depp, which read: “I’m at a coffee...
CELEBRITIES・25 DAYS AGO
Rolling Stone

Click here to read the full article. In his final day on the stand in his $50 million defamation trial against ex-wife Amber Heard, Johnny Depp told the court “the only person that I have ever abused in my life is myself.” After a three-day break in which the court was dark, the seven-person jury listened to a series of audio recordings — often chaotic and difficult to decipher — that included a Depp prediction that Heard “will hit the wall hard,” a phrase that also appeared in a text message written by the actor that was introduced to the court. “You...
CELEBRITIES・25 DAYS AGO
PopCrush

90 Day Fiancé: Before the 90 Days star Johnny Chao is showing off a new look on social media. The reality TV star rocked a fresh-faced look on the show. However, Chao debuted some new facial hair in his most recent post on Instagram. More specifically, he grew a beard and mustache.
TV & VIDEOS・24 DAYS AGO
Hello Magazine

Gwyneth Paltrow is a doting mom to two teenage children, Apple and Moses, who she shares with ex-husband Chris Martin. The family are notoriously private, but over the weekend the award-winning actress gave a rare insight into their upcoming plans - and how they are changing things up this year for Mother's Day.
FAMILY RELATIONSHIPS・25 DAYS AGO

It seems Coi Leray is getting fed up with the drama. She and her father, Benzino, have not seen eye to eye for quite some time, and despite numerous attempts to mend their relationship, they keep ending up back at square one. Yesterday, 50 Cent, whose been feuding with Benzino...
CELEBRITIES・26 DAYS AGO
Complex

Benzino is once again airing out some family business. After previously calling 50 Cent the “first hip-hop rat,” and getting into various other conflicts with his daughter Coi Leray, the rapper has now name-dropped both of them in a Twitter tirade. On Sunday, Fif took to Instagram to...
CELEBRITIES・25 DAYS AGO
Whiskey Riff

We’re living in bizarre times, and this Johnny Depp/Amber Heard trial is just further proof of that. Depp is suing his ex-wife for $50 million in a defamation suit, and although I’ve been trying my best to stay away from this clown show, it’s practically unavoidable…. Considering...
CELEBRITIES・25 DAYS AGO
GMA

Lizzo expresses desire to star in a Broadway musical: Watch the video

Lizzo shared a TikTok video of her singing a song from "Moulin Rouge! The Musical" and expressed her desire to star on Broadway.
BEHIND VIRAL VIDEOS・3 DAYS AGO
GMA

The "Conversations with Friends" cast dished on their takeaways from the book and why they wanted to be involved in the show.
TV SERIES・7 DAYS AGO
GMA

Leni Klum wore one of her mother Heidi's timeless red carpet dresses from 1998 for her prom.
BEAUTY & FASHION・3 DAYS AGO
GMA

Review: 'Operation Mincemeat' will jolt you with surprises you don't see coming

Sometimes a shamelessly retro wartime romance is all the escape you need.
MOVIES・8 DAYS AGO