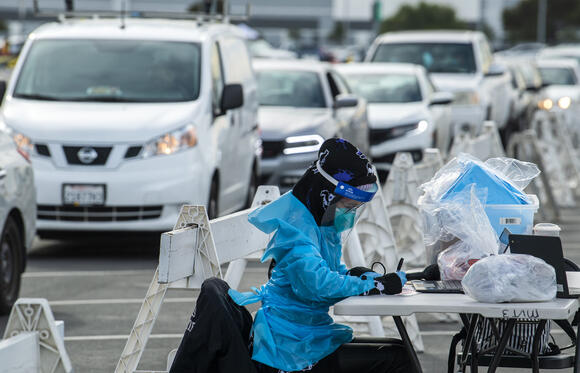 The omicron variant of COVID-19 has caused case levels, including in Long Beach, to top any other point of the two-year pandemic. While there are signs the current surge may have reached its peak— at least locally —public health experts have weighed in with their thoughts on what makes omicron different.

Doctors and epidemiologists throughout the region said in recent phone interviews that the mutations in the omicron variant, along with the relatively high vaccination rate in Southern California, differentiate the current surge from prior waves.

“Just with the caveat that we’re still learning about omicron, and we have a lot of anecdotal evidence or data from countries where it was first seen, it’s a fluid situation,” said Dr. Graham Tse, the COVID-19 physician-in-charge for Long Beach Memorial Medical Center. “Omicron clearly is more transmissible than the previous variants.”

Whereas people who contracted the first variants would likely infect another two or three people, and those with the delta variant would infect five or six people, Tse said, one person with the omicron variant can infect up to 10 people.

“That is highly infectious,” he said. “It puts it right up there with about the level of measles. But also, the preliminary data does suggest that it causes somewhat less severe disease, especially respiratory disease, than were seen in previous surges.”

But while omicron’s transmissibility is due to its mutations, it’s still unclear whether the milder symptoms are due to the variant itself or to the higher vaccination rate in the population.

“I think the jury is still out on whether it is truly more mild in someone who is not immune,” said Dr. Jeffrey Klausner, a clinical professor of population and public health sciences at USC. “Without a doubt, in people who have prior immunity due to vaccination or previous infection, it is more mild and less likely to result in hospitalization. So that’s why we are aggressively recommending vaccination in those who are unvaccinated and boosters for those who have incomplete vaccination.”

Klausner said a major risk of omicron is a shortage of hospital workers because so many are being exposed to COVID-19.

“That hospital staffing shortage is compounded by the fact that people have left direct medical care services, so that there was already a kind of ongoing staffing shortage, and now you lay on top of that, 20, 30, 40% of the workforce testing positive, so they’re off work for a period of time,” he said. “That further makes it difficult to take care of patients, and we still have a fair amount of unvaccinated people who—some of them do end up in the hospital.”

“I think the Health Department and city of Long Beach are facing the same staffing issues that all workplace sectors are facing right now, but we are adjusting and still meeting the demands,” Davis said. “Our daily case rate is the highest it’s been since the start of the pandemic. We’re in the low thousands everyday as far as the number of new cases, so that is a lot of work. We’re just very, very busy.”

Tse, at Memorial, had similar thoughts on how omicron is impacting the local health care system.

“At MemorialCare, our hospitals have not been immune to the increase in the number of cases and hospitalizations, so we have seen increased numbers of patients both coming through our emergency department and that are requiring admission to our hospitals,” he said. “So in terms of operations, it has required us to re-implement some of the practices from prior surges, meaning designating units for COVID patients. But we’ve become very adept at adjusting to increasing and fluctuating numbers. We have plenty of [personal protective equipment]. Our staff are feeling very safe. They’re very comfortable with the practices we’ve really solidified.”

But just as prior surges have waned, the omicron wave will too—and may already be on the downswing. Indeed, some experts say there’s reason to believe it could end more quickly than prior waves.

“It’s hard to know, but the hope is—based on data from South Africa in particular—that omicron seems to move through populations fairly quickly,” said Dr. Timothy Brewer, a professor of medicine and epidemiology at UCLA. “So in South Africa, it took about three weeks to peak and start to fall off.”

Once the omicron wave has fully subsided, though, COVID-19 will likely still be here to stay. Looking further out into the future, experts said some of the changes we’ve experienced over the last two years could become permanent.

“We’re going to have to learn to live with this virus, just like we live with other viruses that circulate within the population,” Brewer said, “and we’re going to need to develop strategies to try to minimize the impact of the virus on health and health care—and also on the economy and our general social behaviors in life.”

Brewer likened the lasting behavioral impact of COVID-19 to that of 9/11.

“We still take off our shoes when we go to the airport, even though it’s been 20 years,” he said. “I think we’ll need to adjust to new normals with [COVID-19]. For example, I think you will see people wearing masks much more in public going forward than ever occurred before 2019, and I don’t think it’s going to change anytime soon.”

At this point in the pandemic, Brewer said, it’s time to change some of the messaging around the virus.

And the best way to do that, he and others interviewed said, is to keep raising vaccination rates.

More than 100 years ago, 50 people died when a large section of the upper deck floor of the Pine Avenue Pier collapsed. The post Local history: The Empire Day Disaster, May 24, 1913 appeared first on Long Beach Post.
LONG BEACH, CA・2 DAYS AGO

For expectant mothers in Long Beach, hospitals aren’t the only option

Department of Public Health data shows the percentage of births happening outside of hospitals has doubled since 2007. The post For expectant mothers in Long Beach, hospitals aren’t the only option appeared first on Long Beach Post.
LONG BEACH, CA・7 DAYS AGO
Long Beach Post

The Long Beach Convention Center will host the Cannabis Science Conference, one of the only forums for cannabis researchers and professionals to convene and discuss the latest findings related to the drug and its medical applications. The conference runs May 18-20. The post Medical cannabis conference blazes into Long Beach for 1st time appeared first on Long Beach Post.
LONG BEACH, CA・5 DAYS AGO
Long Beach Post

City could sell $130M in bonds to help fund airport improvements, save on existing debt

The mailer, which was produced by an independent expenditure committee that has received almost $39,000 from the union representing Long Beach police officers, has drawn a pointed response from Rex Richardson and his backers, who say it misrepresents his position. The post Campaign mailer roils mayoral race with accusations of defunding LBPD appeared first on Long Beach Post.
LONG BEACH, CA・5 DAYS AGO

If you’ve grown weary of Long Beach, California, there are plenty of others to choose from—Long Beaches, that is. The post Here are some ways to move from one Long Beach to another appeared first on Long Beach Post.
LONG BEACH, CA・6 DAYS AGO
Long Beach Post

‘I’m still in shock.’ Mother of twins says her family lost everything in apartment fire

"It doesn’t help me to cry or be mad about it," Brenae Gross says. "We're lucky nobody got hurt." The post ‘I’m still in shock.’ Mother of twins says her family lost everything in apartment fire appeared first on Long Beach Post.
LONG BEACH, CA・16 HOURS AGO
Long Beach Post

Gold’s Gym on Pine to close after 35 years, relocate to Pike Outlets

The new gym adjacent to the Nike Factory Store is expected to open in mid-2023. The post Gold’s Gym on Pine to close after 35 years, relocate to Pike Outlets appeared first on Long Beach Post.
LONG BEACH, CA・3 DAYS AGO

Sports desk is an AI computer program that is designed to keep you updated on local high school sports scores. Updates are automatically generated. If you see any errors please let us know. Support our journalism. Hyperlocal news is an essential force in our democracy, but it costs money to...
MISSION VIEJO, CA・2 DAYS AGO
Long Beach Post

Unite the People advocates for incarcerated, with plans to help people stay out of prison

The launch window begins next month and is open through December, but Relativity Space has not yet announced a date for the first flight. The post First-ever fully 3D-printed rocket could blast off as early as June 1 appeared first on Long Beach Post.
LONG BEACH, CA・4 DAYS AGO
Long Beach Post

The firefighter is expected to make a full recovery after helping to douse flames that were burning through the roof of a home on Monday afternoon. The post Firefighter hurt battling blaze at East Long Beach home, officials say appeared first on Long Beach Post.
LONG BEACH, CA・6 DAYS AGO