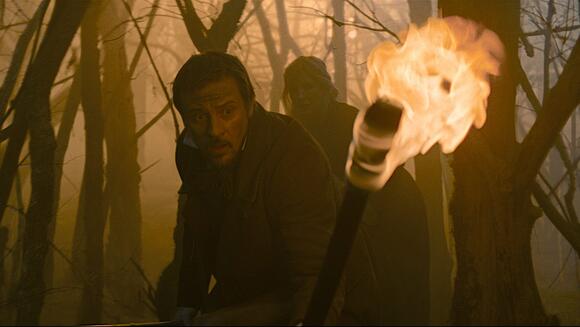 LD Entertainment has unveiled a trailer for its gothic thriller The Cursed , starring Boyd Holbrook ( The Sandman , Logan ), Kelly Reilly ( Yellowstone , True Detective ) and Alistair Petrie ( Sex Education , Rogue One: A Star Wars Story) , also announcing that it will be released in theaters nationwide on February 18.

The film from writer-director Sean Ellis , formerly titled Eight for Silver , is a reimagining of the werewolf legend for a modern-day audience, which made its world premiere at the 2021 Sundance Film Festival.  It picks up in the late 1800s and watches as a once-peaceful remote country village comes under attack—by who or what, no one knows. Villagers spread rumors of a cursed land, supernatural forces, and even demonic creatures, as the disappearances and killings continue. But when pathologist John McBride (Holbrook) arrives to investigate the danger, he comes to discover something much deeper and more sinister than he ever could have imagined.

Ellis served as the film’s cinematographer and also produced it with LD’s Mickey Liddell and Pete Shilaimon, with Alison Semenza and Jacob Yakob exec producing.

“Sundance is always an incredible place to showcase your work. In the time that has followed that valuable experience, we took the opportunity to invigorate the film with an updated score by Lorne Balfe; we changed much of the CGI and decided to put back much of the original in-camera effects,” said Ellis. “We also elevated elements of the story that pay tribute to the incredible multitude of layers that live within the horror genre.”

“We set out to make a genre film with an incredibly talented filmmaker. Sean Ellis has created a story that is so much more than that: it’s timely, scary as hell, and most importantly unique,” added Liddell and Shilaimon in a joint statement. “We are thrilled for people to finally see Sean’s striking vision on the big screen.”

Check out the trailer for its latest film, The Cursed , above.

Click here to read the full article. Netflix’s FYSEE Space’s opening night ATAS panel on Sunday night showcased Shondaland’s Bridgerton season 2 and revealed big news about Season 3. At the conclusion of the panel, star Nicola Coughlan was asked what Lady Whistledown can tell viewers to expect in season 3. The actress, who plays Penelope Featherington whose alter ego is Lady Whistledown, revealed that the next installment will be all about #Polin. It will follow her character Penelope Featherington and Colin Bridgerton (played by Luke Newton) as their friendship potentially blooms into something more all while balancing her double life...
TV SERIES・17 HOURS AGO
Deadline

Click here to read the full article. Black Mirror is returning to Netflix for a sixth season, Deadline has confirmed. Charlie Brooker’s dystopian show has been one of the streamer’s landmarks since being picked up from Channel 4 after series two, setting the bar for high quality and innovative thinking. The sixth season will likely follow the same pattern as the fifth, which reduced the number of episodes down to three but extended them to feature film length, a source confirmed. Season five was preceded by innovative playalong feature Bandersnatch and was comprised of three episodes: Striking Vipers with Anthony Mackie and Yahya Abdul-Matteen II, Smithereens with Sherlock star...
TV SERIES・9 HOURS AGO
Deadline

Click here to read the full article. EXCLUSIVE: Apple TV+ has ordered Eva the Owlet, a new animated kids and family series based on Rebecca Elliott’s bestselling Scholastic book series Owl Diaries. Eva the Owlet stars Eva, a creative, cheeky owlet who lives next door to her best friend ‘Lucy’ in the woodland world of Treetopington. With big ideas and an even bigger personality, Eva goes on high-flying adventures, expressing herself in her journal along the way! Since first being published, Owl Diaries now has eight foreign language translations and 3 million copies in print. Produced by Scholastic Entertainment and animated by...
TV SERIES・4 HOURS AGO
Deadline

Click here to read the full article. A war of words has broken out between the filmmakers who have brought audiences two different versions, nearly two decades apart, of the real-life mystery behind The Staircase. French director Jean-Xavier de Lestrade’s 2004 Peabody Award-winning documentary told the story of the fortunate Peterson family who lived in a luxurious mansion in North Carolina, until Kathleen Peterson’s body was discovered at the foot of a staircase, and her husband Michael was tried for murder. More recently, Antonio Campos has adapted the same story into an HBO Max TV drama series starring Colin Firth and Toni...
NFL・1 DAY AGO

Click here to read the full article. Fox is finalizing a straight-to-series order to a black comedy about a meteorologist whose life unspools after a freak injury at work. Cindy Snow, from The Flight Attendant creator Steve Yockey and Warner Bros TV, was teased by Call Me Kat star and EP Mayim Bialik during Fox’s upfront presentation. As Deadline has reported, the single-camera project had been in strong contention for a series order at the network under a lower-cost model, with the goal to film the show for about $2.2 million an episode, likely in Atlanta. Yockey is writing, exec producing and...
TV SHOWS・43 MINUTES AGO
Hello Magazine

Click here to read the full article. It seems like everyone was rooting for Renée Zellweger and Ant Anstead to get together, including an unexpected duo: the Property Brothers. Drew and Jonathan Scott recently revealed that they were the ones that ended up getting Zellweger and Anstead to meet, and subsequently fall in love. And their hard work ended up paying off! Back on April 14, 2022, the Scott brothers sat down with ExtraTV to talk about everything from Drew’s upcoming fatherhood to Jonathan loving GF Zooey Deschanel’s Vanity Fair gown. While we loved the entire interview, we’re losing it over...
CELEBRITIES・22 DAYS AGO
Us Weekly

The show — and the vacation — must go on. Jada Pinkett Smith determined that the family trip to India wasn't going to be canceled due to Will Smith's Oscars slap. "Will and Jada have taken the family on [a] vacation that was already planned," a source exclusively tells Us Weekly. The Concussion star, 53, […]
CELEBRITIES・22 DAYS AGO

Kate Hudson has realized one of her dreams and has taken to Instagram to share the incredible news with her 15 million followers. Sharing two pictures of her looking casual in a pair of baggy dip-dyed trousers and a white tank top, and singing into a microphone, the actress announced a surprising career change.
CELEBRITIES・20 DAYS AGO
ComicBook

After weeks of silence, Chris Rock has finally addressed his now-infamous incident with Will Smith at March's 94th Annual Academy Awards. During another sold-out show at Baltimore's Lyric Performing Arts Center on Friday, Rock directly referenced the slap, but only spent a second on it before moving on with his set.
BALTIMORE, MD・22 DAYS AGO
Outsider.com

One of the stars of This Is Us is on the move to a new network in advance of the show's series finale. Deadline reported in March that Chris Sullivan, who plays Toby on the NBC series, will headline a comedy pilot for ABC. His new show is set to be titled The Son In Law.
TV SERIES・19 DAYS AGO

Geroge Wendt, who played Norm on the classic TV show Cheers, decided to be like Jack when he was in public. We mean Jack Nicholson here. The famed movie actor seemingly did not mind being noticed when out among the non-Hollywood crowd. Nicholson’s attitude about this did ring a bell for Wendt during his show’s incredible run on NBC and in reruns today.
CELEBRITIES・20 DAYS AGO
Insider

Depp said he discovered Disney would not recast him in "Pirates" days after Amber Heard's Washington Post op-ed article was published.
FAIRFAX, VA・21 DAYS AGO
SheKnows

The funny things that kids say are sometimes the cutest. With Eli currently in a coma, we haven’t seen Days of Our Lives actor Lamon Archey in action in Salem for a while now but he recently showed off a new look that had his daughter not only asking him why he decided on the change but also giving her opinion on why he did it in the first place.
CELEBRITIES・20 DAYS AGO
Popculture

Spring is always a big time for engagements and weddings, and two beloved internet personalities are the latest to update their relationship status. On April 18, Rachel "Seltzer" Quirico revealed she and longtime boyfriend Trevor "TorcH" Housten were tying the knot after 17 years together. Both of them are beloved figures in the esports world, with Seltzer notably starring in the Syfy reality show WCG Ultimate Gamer. She's also hosted numerous esports tournaments and events for TV/streaming outlets; she also made a recent appearance on G4 TV's Boosted.
RELATIONSHIP ADVICE・20 DAYS AGO
Daily Mail

Katy Perry reacted quite hilariously to a Top 11 contestant on American Idol during a unique song challenge on Monday night's episode. Each of the remaining contestants were given a song to perform by each judge - Perry, Lionel Richie and Luke Bryan - with the singer selecting one and then tasked with guessing which judge picked that song for him or her.
MUSIC・20 DAYS AGO
Deadline

Click here to read the full article. UPDATED: After a blink-and-you-missed-it appearance at the end of Doctor Strange in the Multiverse of Madness, Charlize Theron offered a better look today at Clea, the powerful new character she will play in the Marvel Cinematic Universe. The Oscar-winner shared video of what appears to be a 3D body scan session of herself in character. She stands inside a circle of scaffolding with about 100 cameras spaced evenly throughout it. The video reveals Theron’s full look, head to toe, including her cape, long platinum hair and, of course, the character’s purple tights and boots. She wrote...
NFL・2 DAYS AGO
Deadline

Click here to read the full article. They’re one of the most famous families in Latin America. Now, the rest of the world beckons, as the Montaner family is launching a new reality series on Disney+. Coming to Disney+ later this year, Los Montaner is a new Disney+ original documentary series. It takes audiences inside the day-to-day life of the Montaner family’s most intimate moments including weddings, births, and celebrations, as well as, providing the audience with a behind-the-scenes look at their artistic careers. Los Montaner follows the iconic family of the Montaners: Ricardo, Marlene, Mau, Ricky and Evaluna, and their significant...
TV SERIES・2 DAYS AGO
PopCrush

90 Day Fiancé: Before the 90 Days star Johnny Chao is showing off a new look on social media. The reality TV star rocked a fresh-faced look on the show. However, Chao debuted some new facial hair in his most recent post on Instagram. More specifically, he grew a beard and mustache.
TV & VIDEOS・20 DAYS AGO