Inspiring veterans and preparing them for their next mission, one story at a time. 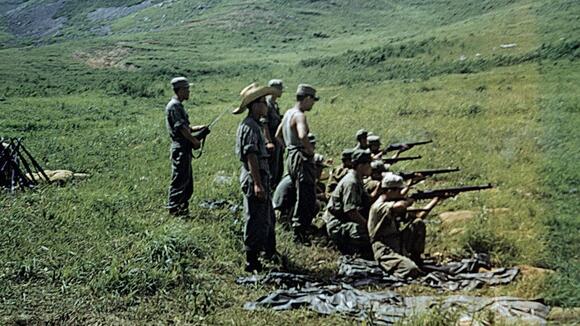 Seventy-one years ago, on 25 January 1951, the American Far East Command (FEC) established its first forward base for conducting guerrilla warfare in North Korea.

When the U.S. Eighth Army retreated from North Korea in late 1950, it carried with it some 6,000 to 12,000 Korean irregulars who declared their willingness to fight on the side of the U.S. Indeed, many had been actively resisting North Korean control since the country was divided in 1945. Most of these irregulars fled the surprise arrival of Chinese Communists, occupying defendable friendly-held islands or mainland territory along the Korean coast.

The Far East Command decided to employ this force as guerrillas behind enemy lines, and for almost 3 years these forces were trained, supported, and directed by select soldiers of the Eighth U.S. Army’s secret 8240 Army Unit.

With logistical support, rations, training, and arms provided by their U.S. Army advisors, they proved to be a potent force for attacking and disrupting North Korean and Communist Chinese units in rear areas.

For the remainder of the war, the guerrillas served well at their mission of providing deep intelligence and keeping the Communist forces off balance. It is estimated their combat activities diverted more than 50,000 front line troops that might have otherwise been employed on the enemy front.

The guerrillas also protected the western flank of Seoul, and effectively defended a series of offshore islands that remain in UN control today, despite being located above the accepted demilitarized boundary dividing North and South Korea. The guerrillas raided enemy encampments in rear areas, conducted successful amphibious operations to seize more islands, and saved more than 100 downed pilots and aircrew from capture or death behind the lines.

And while the majority of their operations took place along the west coast of North Korea, they operated off the east as well, even holding an outpost within Wonsan Harbor until the Armistice.

Their activities, highly classified until the early 2000s, resulted in the writing of the first Army doctrine on special operations. The combat requirements of persons skilled in guerrilla operations, at first filled by select WWII veterans of Philippine and Burma guerrilla units, were also part of the impetus for the U.S. Army forming Special Forces in 1952.

Indeed, 99 graduates of the first four Special Forces training courses were selected for service in Korea with the guerrillas, making Korea the first combat employment of that new Army specialty. In addition, Ranger veterans were also assigned to advise the North Korean guerrillas, sharing their skills at raiding and small unit commando-type actions with their partners.

Unfortunately for the Army, the high classification level of the guerrilla command’s operations prevented any lessons learned from being realized and utilized to train future special operations soldiers. Persons who served with the unit in Korea were warned never to talk about the unit, its mission, or activities, even when some returned to the states to train the next generation of special operatives.

The system at that time was so inflexible that those lessons could not be realized or passed on. It wouldn’t be until fifty years had passed before the unit’s activities could be declassified and fully appreciated.

Some of the guerrilla forces’ major successes were:

-Penetrating the Communist defenses with ease and regularity.

-Occupying and defending the Northwest Islands, maintaining them as UN controlled areas.

-Protecting the West Flank of the UNC MLR.

At its height, the North Korean guerrilla forces grew to a strength of 23,000 soldiers. But by 1953, when both sides pursued an armistice, the guerrillas saw the handwriting on the wall. With little chance of returning to their homes and families in the North, many began to leave the ranks and their combat incursions became less frequent.

When the Armistice was signed in July 1953, the agreed solution for the 10,000 remaining guerrillas was to be rolled into the South’s army as replacement soldiers. Thus, the Army’s experiment with guerrilla forces came to an end, at least in the Korean Theater. Despite their work in secret, they made a significant contribution and helped to shape the political outcome on the Korean Peninsula today.

North Korea’s launch of another apparent ballistic missile over the waters to its east, alarmed South Korea, Japan, and the United States, which defense leaders of those countries “strongly condemned.”
MILITARY・21 DAYS AGO
Daily Mail

A veteran Russian legislator has issued an appeal to Vladimir Putin to stop military action, bring his troops home and end the war in Ukraine. Communist deputy Leonid Vasyukevich, 69, blasted the use of Moscow’s servicemen in Ukraine, as a Russian court dismissed more than 100 national guardsmen in the first case of soldiers refusing to fight in Ukraine as politicians demanded the army return home.
POLITICS・1 DAY AGO
Daily Beast

Sen. Ted Cruz (R-TX) abruptly walked off from a British journalist’s questions about gun violence in America two days after an elementary school massacre in his state left 19 children and two adults dead. Cruz, who is due to appear at a National Rifle Association convention this weekend, became...
CONGRESS & COURTS・2 DAYS AGO
Business Insider

Russia has fired hundreds of missiles in its war with Ukraine, but the US assesses most have failed, reports say

"We are talking well under half of all Russian missiles hitting their aim points," a Defense Intelligence Agency official told Newsweek.
MILITARY・20 HOURS AGO

The Russian official read out an appeal to the president demanding the immediate withdrawal of troops from the territory of Ukraine.
POLITICS・1 DAY AGO
Connecting Vets

Killed in Korean War, Army Cpl. Brown has been accounted for

"After Ukraine, if we're given the command, in six seconds we'll show you what we're capable of," Chechen leader Ramzan Kadyrov said.
POLITICS・2 DAYS AGO
The Drive

microchips in Russian weapons captured in ukraine.Ukraine intelligence showed us lists of mostly U.S.-made microchips it says were found on captured or destroyed Russians military equipment.
MILITARY・20 HOURS AGO

China’s latest aggressive military activities near Taiwan have many observers speculating if, or when, Beijing will invade the island democracy. If China does end up moving against the island, the process started last weekend, when Beijing made yet another assertive messaging effort and Washington did the exact opposite. When...
POLITICS・1 DAY AGO
americanmilitarynews.com

The Central Intelligence Agency added two new stars to its Memorial Wall at the agency’s headquarters in Langley, Va., on Monday, signifying for the first time that two agency officers were killed in the line of duty over the past year. In a press release, the CIA said it...
MILITARY・2 DAYS AGO
Connecting Vets

Medal of Honor pilot accounted for from World War II

Former U.S. Marine Corps officer Andrew Milburn is utilizing his skills and experience to help train Ukrainian soldiers, who are in combat, to sharpen up their skills and help them win.
MILITARY・17 DAYS AGO
Connecting Vets

From a second chance at life to Sgt. Audie Murphy Club

For the first time, a U.S. Army officer has been convicted at court-martial for failing to comply with COVID-19 pandemic restrictions. The conviction will follow his military career.
MILITARY・23 DAYS AGO
Outsider.com

Television host Mike Rowe recently accused the government of revoking a Dirty Jobs filming permit at the last minute because of his personal politics. Rowe took to Facebook to explain his side of the ordeal, The Blaze reports. He said the Government Services Administration, which “oversees the location” where the episode on boilermakers was slated to film, “suddenly revoked our permit.”
TV & VIDEOS・26 MINUTES AGO
Connecting Vets

Pentagon tours are back

Tours in the Pentagon will take place at 10 a.m. and 1 p.m. on Tuesdays and Thursdays — a limited schedule from what was the pre-COVID-19 norm.
AEROSPACE & DEFENSE・25 DAYS AGO

Inspiring veterans and preparing them for their next mission, one story at a time.