This is the heartbreaking moment a dying dog appears to wave goodbye to its owner.

The six-year-old Alaskan Malamute had been taken to the vets in Jinzhong, in Shanxi Province, northern China, where tumours were discovered growing on its liver.

Footage, filmed on January 20 and shared on social media, shows the dog lying on his side and looking up at its owner, identified only as Ms Xu.

As it lies on the counter, with an IV line in one leg, the poorly pet moves its front paws back and forth in a waving motion.

The dog, whose name has not been revealed, then rolls over and shuffles closer to the camera before lying down again at the end of the 15-second clip.

It died shortly afterwards, according to reports.

Ms Xu - who adopted her beloved Alaskan Malamute in 2015 - said the animal's health drastically declined within a week of him falling ill.

The dog was reportedly in a lot of pain, with a swollen abdomen, and the decision was made by vets to put it down.

Ms Xu said that she believed that her beloved pet was waving goodbye to her before dying, after she told it: 'If you feel uncomfortable, just leave, don't endure it.' 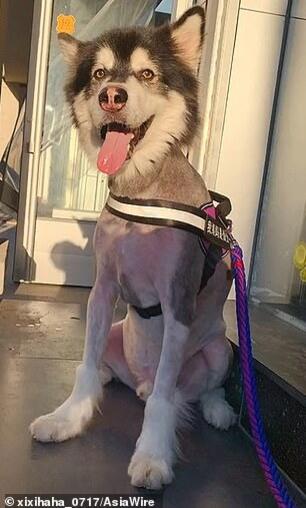 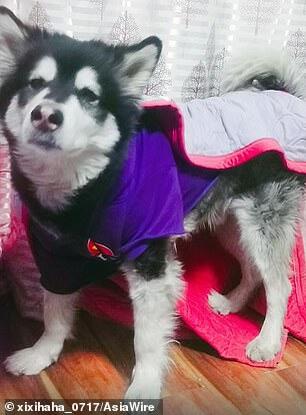 The heartbreaking video has since been shared widely and users have sent their condolences to the owner.

One viewer wrote: 'The most fearful thing for pet owners is the moment of parting.'

Another said: 'It's just that he can't speak, but he actually understands everything.'

One more added: 'I really can't watch this kind of thing with hairy children.'

Another said: 'Dogs are very spiritual animals,' while another added: 'It's so sad. I hope the dog will be a human in the next life. Every dog finds a good owner.'

That’s heartbreaking. We had a 5 month old boxer that ended up with kidney failure because they didn’t form and she was the most living dog. When we knew it was no chance of recovery and the vet explained the pain she would experience we opted to have her euthanized instead of taking the weekend for “goodbyes” because she didn’t deserve to be in pain any longer. When they started the injections she was lying on concrete because of Covid protocols but I couldn’t stand the thought of her last moment being like that being that it was raining and new year eve. As a grown man I put her in my lap wrapped her in my hoodie and wept like a baby as we all loved on her until the vet said she was at peace.

So sorry for your loss I lost my little dog last year, I wanted to bring him home, I clung on to him I loved him so much, he was part of me where ever I was Teddy was there, I will never get over his passing.

I sm truly sorry for your loss. I got chills reading this recount. May your beautiful dog rest peacefully, and free of pain.I believe he wasn't kust sauong goodbye, but thank you for loving him. They know love, and appreciate those moments spent together.May the breeze of comfort touch you. I just so sorry for your loss.Tonya

A massive saltie refusing to budge from a Torres Strait island met its match when an enterprising local brought in a backhoe loader. Extraordinary video captures the moment the resident of Saibai Island, in northern Australia, manoeuvres the scoop of the machine to try and shift the stubborn beast from where it was resting beside a road.
ANIMALS・2 DAYS AGO
Davenport Journal

Unfortunately, the 27-year-old mother and the 31-year-old father say their baby daughter has months to live. The 1-year-old child is suffering from a rare condition which was caused by a gene defect both parents carry. The parents knew something was wrong with their child when the baby started to go off her food at six weeks. The baby also started to lose weight, the couple said. The condition was confirmed with genetic testing and the doctors said it affects her ability to absorb the nutrients she needs from food. The condition is so rare it is thought to only occur in one in 79,000,000 people, the doctors said.
WEIGHT LOSS・25 DAYS AGO
Fatim Hemraj

Andrea Lynn Hayslette lived in Surfside Beach, South Carolina with her husband Larry and their two children; 5-year-old Ryan and 2-year-old Katie. According to The Charley Project, the 29-year-old was a straight-A student at Coastal Carolina University and she worked part-time.
SURFSIDE BEACH, SC・26 DAYS AGO

Every parent's worst nightmare: Family 'beyond disgusted' after toddler escapes from Melbourne child care centre and is found wandering near a busy road

A furious family has demanded answers after a little girl escaped from a child care centre and was found wandering in a public car park near a busy main road. Two-year-old Maisie was left unsupervised for three minutes at Nido Early School in Werribee in Melbourne's west on Tuesday morning.
PUBLIC SAFETY・2 DAYS AGO
Upworthy

A new trend in treasure hunting called magnet fishing has blown up over the past two years, evidenced by an explosion of YouTube channels covering the hobby. Magnet fishing is a pretty simple activity. Hobbyists attach high-powered magnets to strong ropes, drop them into waterways and see what they attract.
HOBBIES・25 DAYS AGO
Daily Mail

A British woman has died from respiratory complications brought about by Covid after she discovered she had been infected while on a cruise ship in the Mediterranean. The 60-year-old, who has not yet been named, died at the San Giovanni di Dio e Ruggi d'Aragona hospital in Salerno in the early hours of Friday morning.
WORLD・24 DAYS AGO
Shreveport Magazine

According to the boy’s mothers, a teacher at the charter school decided to cut their son’s hair while he was in distress, instead of calling them for help. Now, the mothers claim that this will not go unnoticed until everyone is held accountable. The boy’s parents were reportedly upset that the teacher didn’t find a more effective way to help their son aside from cutting his hair. The boy’s mothers also said that their son was proud of the afro he was growing. “What made her think that this is OK? if you were going to help my child why wouldn’t you do it the proper way, common sense way, the helpful way? By getting him some real help?” one of the mothers said.
MINNESOTA STATE・24 DAYS AGO

The exponential increase in saltwater crocodile populations in the Northern Territory in recent decades may be partly a result of them preying on feral pigs, new research suggests. Scientists who have analysed the diets of saltwater crocodiles in the Territory believe the reptiles have shifted from marine prey to predominantly...
ANIMALS・24 DAYS AGO
The Independent

A wedding caterer has been praised for turning down all events where the bride and groom are asking their guests to pay for their own meals.In a recent post shared on the discussion-based site Mumsnet, a user explained that they run a “wedding catering company” that is “based on a food truck” and works for “less formal weddings”.They then revealed that some couples who have reached out to them about catering have been expecting their guests to purchase their own dinners at their weddings, a concept that the caterer said they have been “turning down” because they believe it is...
RELATIONSHIP ADVICE・25 DAYS AGO
Daily Mail

Walking at a brisk pace for just 75 minutes every week could cut your risk of depression, a new study finds. The World Health Organization recommends everyone should exercise for at least two-and-a-half hours every seven days. But researchers at Cambridge University, England, found adults who got half as much...
FITNESS・25 DAYS AGO
Newsweek

Bodycam footage captured the snake slithering around the room as an officer attempted to capture it.
BOYNTON BEACH, FL・24 DAYS AGO
Daily Mail

Ant Anstead recently accused his ex-wife Christina Hall of exploiting their son Hudson for financial gain on social media but is now defending his right to share snaps of the toddler online. The 43-year-old was branded a hypocrite by a fan of Christina's who called him out in an Instagram...
FAMILY RELATIONSHIPS・2 DAYS AGO
The US Sun

GENERAL Hospital revealed a major character change is coming to the show this week as one of its stars battles health issues. There are often comings and goings happenings on soaps, and the latest cast switch-up involves longtime cast member Nancy Lee Grahn. Nancy, who turns 66 on Thursday, has...
CELEBRITIES・25 DAYS AGO
Newsweek

If you've ever watched The Founder then you'll know just how much of an impact McDonald's and Ray Kroc made on the food service industry. The speedy meal system developed by brothers Richard and Maurice McDonald minimized wait times for customers and using predominantly paper products from wrappers, bags, and cups resulted in a takeout phenomenon that tons of other businesses would go on to emulate.
PUBLIC SAFETY・25 DAYS AGO
MotorBiscuit

Here's what a white towel or paper bag symbolizes when found planted or wrapped around a broken-down or abandoned car.
GAS PRICE・28 DAYS AGO
Newsweek

Troy Staggs found himself in a 47-minute long battle with the huge fish, which measured 4.6 feet and weighed around 55 pounds.
MISSOURI STATE・24 DAYS AGO
Newsweek

"We divorced because Jim was a bad husband and not a great dad when we were together," she explained.
RELATIONSHIP ADVICE・24 DAYS AGO
Newsweek

One man has been arrested after the bear was trapped under the wheel of a tractor and tied to an earth mover.
PUBLIC SAFETY・24 DAYS AGO