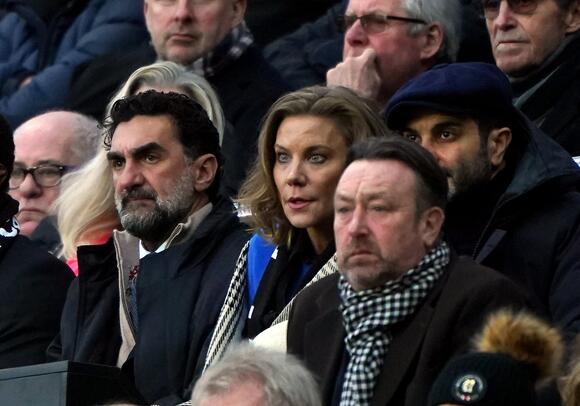 Newcastle’s hunt for further January recruits is destined to go down to the wire as selling clubs dig in for a fight.

The Magpies, in their first transfer window under Amanda Staveley ’s largely Saudi-backed consortium, have spent the last two weeks striving to add to their earlier signings of Kieran Trippier and Chris Wood.

However, they have been met with stern resistance by clubs either determined not to sell their best players this month, or intent on not doing so until they have squeezed every last penny they can out of the Premier League ’s newest financial power.

Newcastle’s search has sparked daily speculation over deals that were supposedly close to completion, only for spanners to be thrown in the works.

Wednesday proved a case in point as French side Lyon were moved to publicly deny claims they had agreed a deal with the Magpies for 24-year-old Brazil midfielder Bruno Guimaraes.

The Ligue 1 club said in a statement on their official website: “Olympique Lyonnais categorically denies the false information disseminated by many media reporting an agreement between Newcastle and OL for the transfer of Brazilian international midfielder Bruno Guimaraes.

“In this transfer window period, where the slightest rumour is often presented as reality, Olympique Lyonnais reminds that only information officially released by the club is to be taken into consideration.”

Sources on Tyneside had been bullish over the pursuit of the Brazilian and it is understood that the club’s interest is ongoing.

Such has been the difficulty in landing their targets this month that Newcastle’s owners have pursued multiple potential signings in anticipation of meeting brick walls with some of them.

That has certainly happened with Lille defender Sven Botman and Sevilla counterpart Diego Carlos, while their hopes of landing Manchester United midfielder Jesse Lingard on loan until the end of the season appear to have receded .

They have also been linked with Brighton duo Dan Burn and Adam Webster , again with little or no encouragement, although the recruitment team remains poised to swoop should stances ease before the window closes on Monday night.

Speaking from the club’s warm-weather training camp in Saudi Arabia, head coach Eddie Howe revealed he was being updated with any developments.

He told NUFC TV: “I think they have no news to tell anybody at the moment, but I’m keeping regularly updated and finger on the pulse as to what is happening.

“As we know, it is a difficult window and we just hope we can get a couple more additions to boost the squad.”

Newcastle sit in 18th place in the table, a point adrift of safety following Saturday’s 1-0 win at Leeds.

They are due to play a friendly against Saudi Pro League leaders Al-Ittihad on Friday with Joelinton , Jamaal Lascelles and Paul Dummett, who all came off injured at Elland Road, still being assessed.

Liverpool boss Jurgen Klopp has been named League Managers’ Association Manager of the Year and also collected the Premier League award at a gala dinner in London on Tuesday evening.The Reds won both the Carabao Cup and FA Cup after beating Chelsea following a penalty shoot-out at Wembley on each occasion – but saw Manchester City finish a point ahead of them to claim the Premier League title on a dramatic final day of the campaign.Liverpool will aim to add the Champions League trophy to their haul when they meet Real Madrid in Paris on Saturday.Congratulations to @LFC Manager Jürgen...
PREMIER LEAGUE・2 HOURS AGO
Futbol on FanNation

The message had not been intended for broadcast.
PREMIER LEAGUE・24 MINUTES AGO
The Independent

Government sources believe the bid to push Chelsea’s sale through on Tuesday night could “go down to the wire”.Downing Street officials are understood to be hopeful of imminently issuing the new licence for Todd Boehly to complete his £4.25billion Chelsea takeover.Those involved in the sale at Whitehall want to sign it off before end of play on Tuesday, to ensure the club can meet all deadlines for registration for next season’s competitions.The Premier League confirmed Boehly and his consortium partners have passed the organisation’s owners’ and directors’ tests and that just leaves Government ratification as the final takeover step.“We now...
PREMIER LEAGUE・5 HOURS AGO